What material(s) should I use to protect my androids against ballistic impacts (bullets) and what protection would I get?

In the world of a story I'm writing, the military (of a superpower who shall remain nameless) has poured a lot of money into remotely operated humanoid drones (basically put on a VR suit and off you go - ignoring all the comms problems). On the outside, they're the same size as normal people (mainly for compatibility reasons, so they can still use regular guns/vehicles/etc - shared battle space and all that). The key thing is that they have thick armor plating around their key systems (20-30mm of some high strength alloy or composite or something - much thinner armor everywhere else though).

What I'd like to know is, using existing materials, what sort of ballistics resistance could I realistically expect to get? (Note, I've seen a youtube vid somewhere of a 50mm thick block titanium surviving a standard 50cal round. It had some major damage, but it did stop the bullet so that's the target to beat).

So, using the best armor currently available (whether it be steel, titanium, composite "layer cake", etc), what would it take to stop these drones? Is a 50cal in the range of what I can expect for 30mm armor or could it take even more of a beating? (P.S. these drones are volume limited as they are human sized, but not weight limited, so it's fine if the armor weights 100kg+ so long as it's not more than around 30mm thick)

Side question 2: If say, the control electronics had a secondary layer of a similar thickness, would it be much more likely to survive?

Having armor be volume limited is weird, but OK it's your world. Maybe they have some kind of novel power source?

Normally when weight is critical, the best armor uses extremely hard materials on the outer surface (ceramic seems to be the state of the art), then there is an air gap, then a material with a high tensile strength to weight ratio (kevlar, titanium, or steel depending on the application), and lastly there is some kind of a spall liner usually made from kevlar fabric. The hard outer surface breaks the projectile into pieces and slows those pieces down. The middle layer absorbs the remaining kinetic energy of the now shattered projectile. Finally, the spall liner catches fragments of the middle layer of armor which break loose at high velocity, ideally without catching fire (thus kevlar rather than UHMWPE). This tends to use up a lot of space though.

There is another class of armor called reactive armor which consists of a sandwich of two steel plates with plastic explosive in the middle. This is mainly useful for resisting shaped charges, but I think any shaped charge weapon is going to be out of your league.

If weight is of no consequence, then extremely dense materials become appealing. I think you will find very few examples since this is essentially never the case, but some tank armors incorporate depleted uranium in the above layer sandwich. Ceramic is still ideal for the outer layer, but you would likely want to use tungsten carbide because it's extremely hard and extremely dense. You would likely back this with depleted uranium or a high strength steel.

.50 caliber ammunition comes in a wide variety of types. https://en.wikipedia.org/wiki/.50_BMG I couldn't find the video you reference, but it likely involved regular ball ammunition. (Copper over a steel core.) APDS (armor piercing discarding sabot) uses a small, very pointy tungsten rod wrapped in a plastic sleeve (the sabot). When fired, the sabot breaks off, leaving the tungsten rod to impact the target on its own. Penetrating power of a bullet tends to be closely related to the pounds per square inch it can exert on the target. Since tungsten is far denser than steel, a tungsten bullet with the same weight and and length as a steel bullet will penetrate far more armor. The M903 APDS round will reportedly penetrate 34mm of rolled homogeneous steel armor (the default armor plate) at 500 meters. My point is that 30mm of the best armor you can get might very well resist a single shot of .50 cal ball, but would likely succumb to several shots of .50 APDS.

side question 1: Pretty much all armor is wrecked at the point where the bullet contacts it. Ceramic armors are created as many individual blocks and the entire block shatters when hit. If accurate repeated fire or extremely high volumes of fire result in multiple bullet hits to the same location, all armors will eventually fail.

side question 2: More armor means better protection. That said, another option would be to just add a few redundant electronic boxes which take over when the first one is damaged. This is standard practice in spacecraft. Computers are tiny, light, and fairly cheap. Armor is big, very heavy, and expensive. A really clever drone might even use multiple processors in parallel in order to process a lot of data really quickly in the middle of combat, then as those processors become destroyed it might switch to a redundancy mode, making its behavior more sluggish but stubborn. This might add some drama to a scene involving trying to kill one of these drones?

I'm not sure how to take your "ignoring comms problems" part of your question, but this would by my preferred attack vector.

Knock out the communications between the droids and their controllers and the droids will be knocked out. You can also fire adhesive shells at their visual sensors or find some way of limiting their movements.

Admittedly, it's pretty sneaky and not terribly dramatic.

Well, there is graphene armor. It's supposed to be way stronger than Kevlar while being a lot lighter to carry.

Side question 1: Of course there is. It's always more cost-effective and desirable to have armor that doesn't become useless after being shot once.

Side question 2: I believe it would be, but I think it'd imperative to create a shock-absorbing element within the armor as well, just to be safe when the unit sustains a powerful blow.

You would need to explain what you want the armour to stop. There's a difference between bulletproof, where bullet deliver kinetic energy, and explosion where projectile deliver explosives designed to not penetrate but melt the armour and destroy what's behind it.

That 50 mm that stop 0.50 cal would be useless against smallest Panzerfaust 30 klein, which could go through 140 mm.

If you stick to only bulletproof then armour thickness is not important as what it's made of and how it's formed. for example dragon scale armour could be very effective on robot that have "skin" made of material that is not penetrated so easily. And don't have muscles or tissue that can be damaged.
So you have some material that stop penetration. underneath that you have "steel" that have good kinetic force distribution. And on top of that that "steel" is formed in valleys and mountains. Kind like 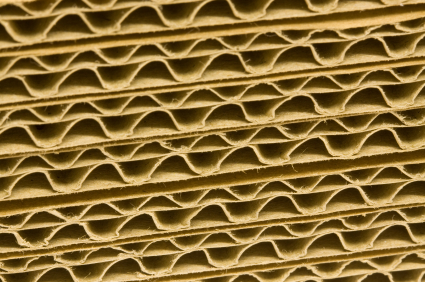 You could make it even harder with forged deeps made for specific part of armour.

So cloth to stop penetrations (as best as it can). then one sheet to support the cloth and distribute energy. Underneath that a pocket filled with some sort of sand (as .50 cal cannot penetrate 55 gallon drum with sand we assume it's good disperser) that hold energy that go through and deflect any particle that come through. and at the end another sheet.

Not the answer you're looking for? Browse other questions tagged science-based weapons materials android .

6
How would the widespread creation and use of androids affect weaponry?
1
Hand Held Coil Gun cannon - Enough to rip a giant robot limbs into pieces
30
What is the hardest wood possible, and where would this be a practical material?
9
Floor Material: What would mer-society like to use for comfortable floors?
18
What material would ant-sized humans use to make armour?
2
What configuration would provide the most protection for a male dragon's reproductive organs against mechanical and chemical attacks?
8
What would mer-folk use as lights and soft surfaces
2
My "Fairy Weave" is a transparent/translucent material with high tensile strength and elasticity. What should it be made out of exactly?
3
Just How Omnipresent Would Cheap Cross Laminated Spider Silk Be?
7
What weaponry and equipment would a 'demonic' race use?