The Next Dinosaur Titans 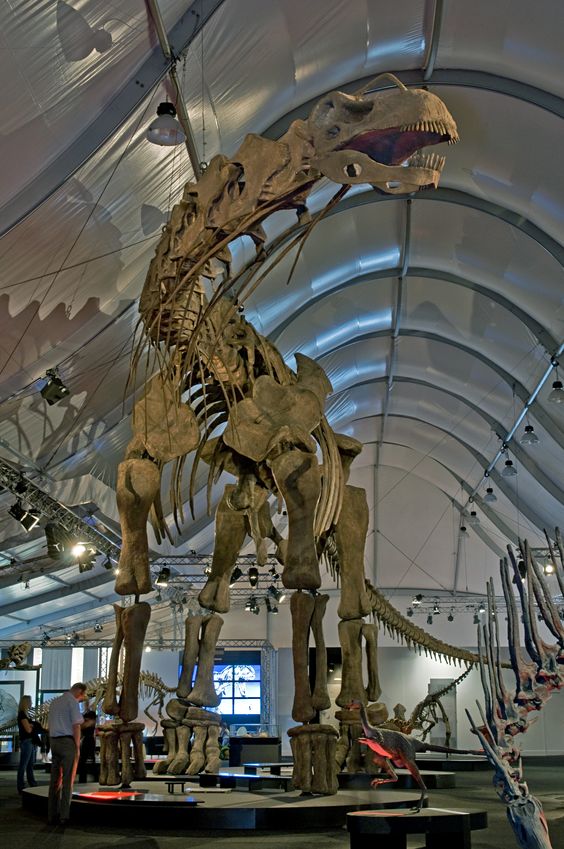 This is a skeleton of a titanosaur, not quite the longest of the dinosaurs, but most certainly the heaviest! As far as we have found, we'd found no species exceeding 75 tons.

This post focuses on a neat piece of evolution called "convergent evolution", in which an unrelated species evolves similar features to deal with similar if not identical circumstances. But before we get to the one sole candidate I have in mind, let's look at the bones that made sauropods both famous and infamous among the human culture: 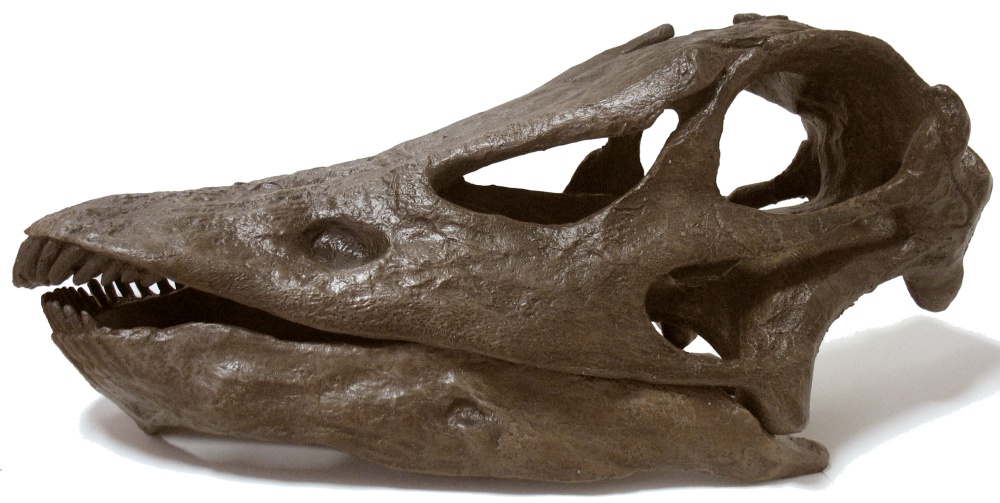 Small (at least in proportion to the rest of the body); Peg-shaped teeth used to strip down leaves; No mechanism to make chewing possible 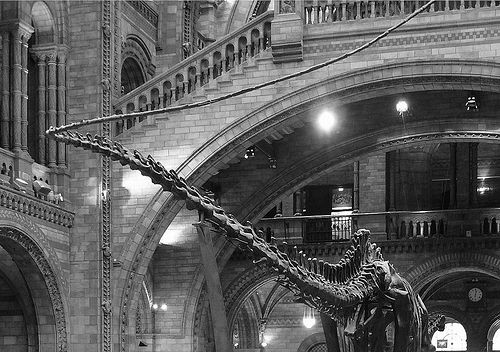 Long; Usually tapering into a whip

In this alternate scenario, dinosaur evolution came later than back home, which means that when the comet slammed the Earth 65 million years ago, geology and biology were Tithonian, not Maastrichtian. (It also helps that the comet worked alone in this scenario--which means no Deccan eruptions and no sea-level regression.)

The sauropods became extinct in this scenario, but at the time, there was a group of dinosaurs small enough to survive the catastrophe and, once the ash had been cleared, become the giants of South America, Africa, India, Australia and Antarctica:

The most notable example of this family, Dryosaurus, may be fleet-footed and bipedal, but recent evidence has found that early sauropods were just like that before the Jurassic gave them the chance to grow out of bounds.

And yet, in this alternate scenario, it was the dryosaurids that would give rise to the alternate titanosaurs, complete with elongated necks and tails. Would they need to change their skulls and loosen up their tails to satisfy this given niche?

To my knowledge no, while they would need long necks, the tails and skulls are not really necessary, there are alternatives. 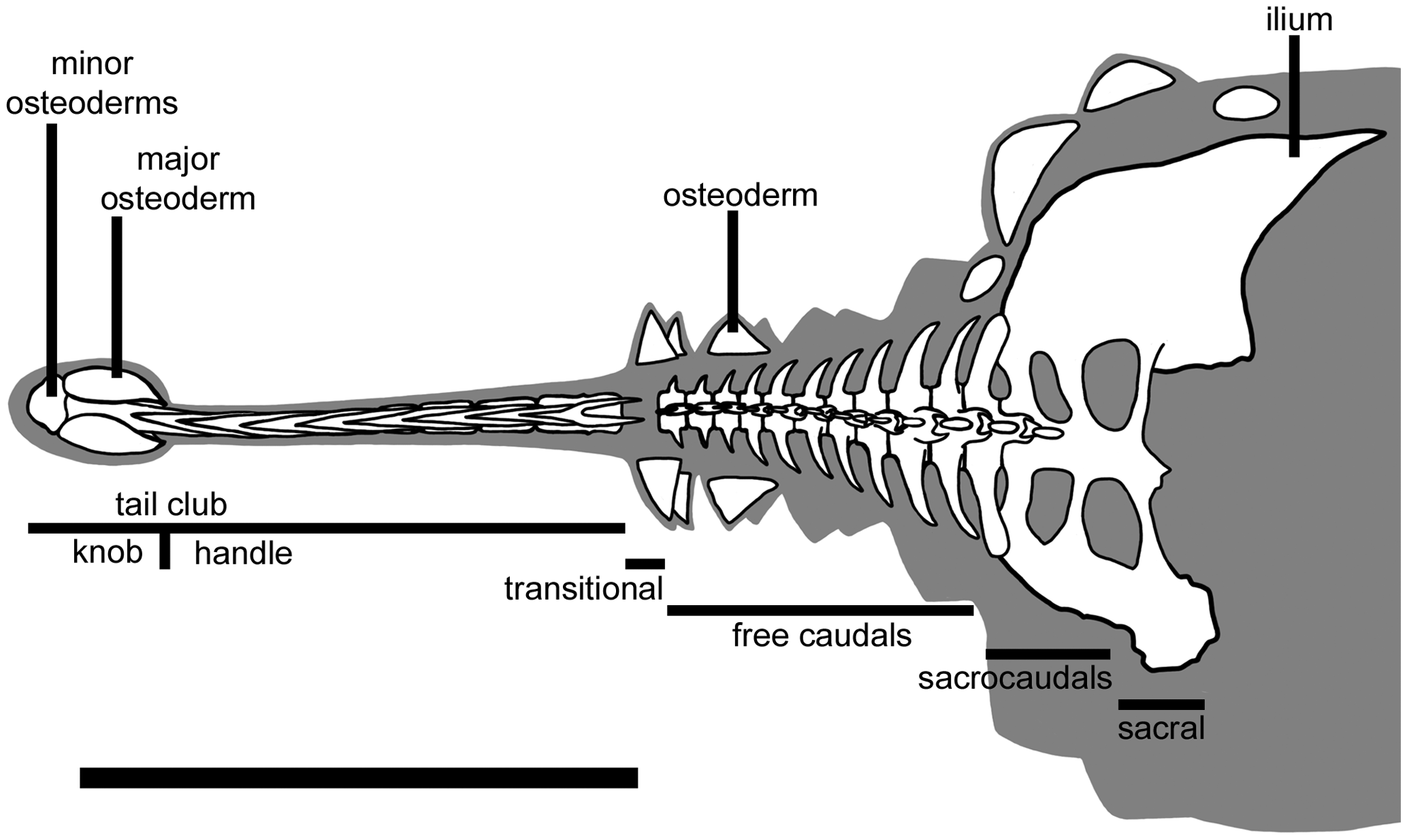 The tail dawned by the Ankylosaurus was impressive, but not unique, Gastodons also had it and while not the same body as Dryosauridae, theoretically, evolution could favor an adaptation of this iconic design.

It has already happened in dinosaurs, titanosaurs are the second group of sauropods to evolve ridiculous size.

but for sauropods, they don't need chewing teeth because they have gastroliths to do the chewing for them, which is why they could evolve the long hoover necks to reach into trees. maximizing intake because processing food is handled on the crop, so you won't have the long necks with chewing. if you want to know what big dryosaurs look like look at hadrosaurs like Parasaurolophus, because that's basically what they are. they whole group are dedicated chewers so no super long necks sorry.

In today's nature animals that can eat from trees and grass normally are four legged like a giraffe or elephant and have teeth for tough vegetation. What would the teeth be good for and would vegetation alone be enough to sustain a animal of that size. The shape of the head and only having front teeth seem that it to pull soft water vegetation in water, swallows its food mostly whole while using it teeth for sifting or catching fish. Flamingos have a similar head structure and sifts water. I imagine land was lush including the swamps would be teaming with life. It would help to know its environment.

On the other hand it would not be very fast but its size could run off anything smaller and use the tail offensively to take predictors food and eat soft dead food swallowing it whole a huge buzzard. That maybe this why it has a small head in the picture below.

Not the answer you're looking for? Browse other questions tagged science-based biology evolution alternate-history dinosaurs or ask your own question.

12
How can a nine tailed fox catch its prey?
2
The growth and development of the fox's nine tails?
8
Evolution of a sexual dimorphic, pack-hunting ninetails
6
Beak to teeth reverse evolution - how would the transitional forms be?
6
Will the Dinosaur Empire Still Stand Strong If Chicxulub Hit Earth at the End of the Jurassic?
3
How feasible would non-jawed vertebrates be on land?
2
Could Prehistoric Species of Animals Eat Modern Species of Plants and/or Animals?
8
Anatomically correct Quetzalcoatl
4
Anthropomorphic animals and chew toys?