Does this SciFi plot about quantum singularity violate laws of physics?

I'm writing a science fiction, although I'm not from a physics background. A part of my plot is:

In a futuristic Earth threatened by huge power demand and climate change, a scientist creates a quantum singularity to generate power.

It was hypothesized that once the mini singularity reaches a certain, manageable size, they'd stop feeding it, and it would spontaneously decay by Hawking Radiation.

But to the world's horror, the artificial quantum singularity never decayed by Hawking Radiation, and now poses a threat to the whole world.

Does this plot violate laws of physics, or is it feasible in a futuristic Earth with access to much better technologies? Could you please suggest anything else, if there are plot-holes?

Yes, it does violate laws of physics

I have been waiting for a time to use this image: 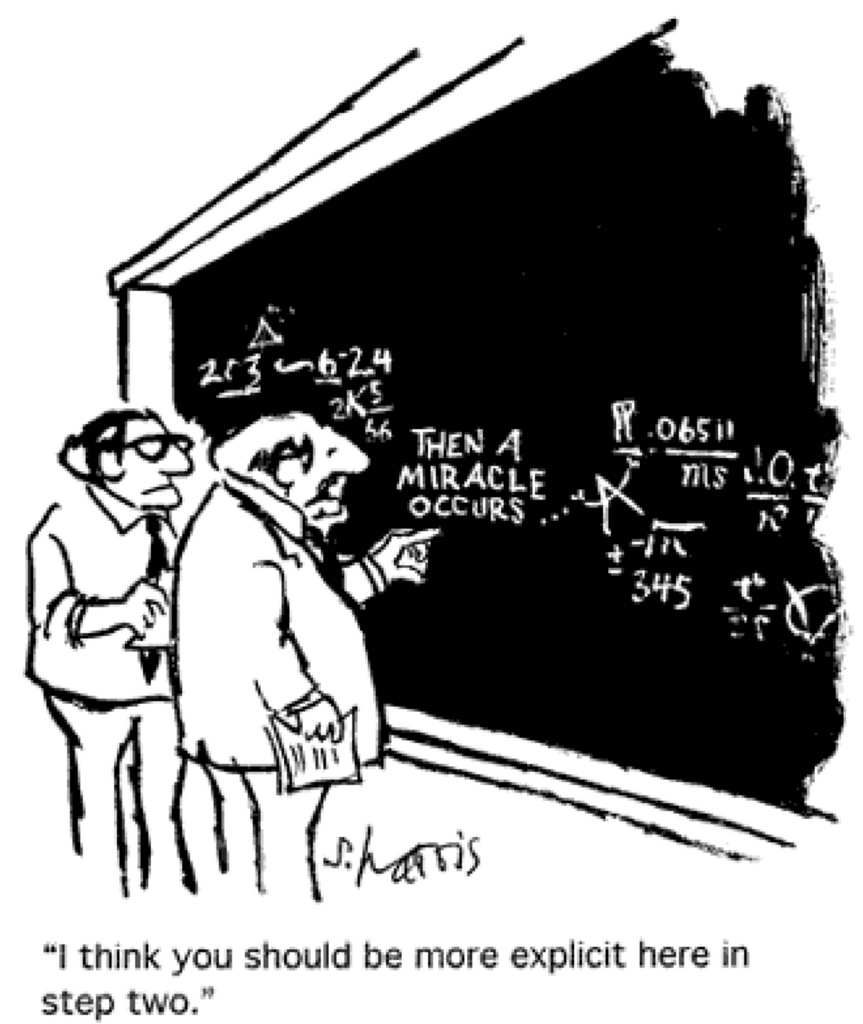 What do you mean "is then converted to clean energy"? How do you suppose that happens? That is the miracle right there. And especially so if you then say that Hawking Radiation does not exist.

I would say that if this future mankind of yours has such a command of the elements of nature, to a degree where they can make singularities, then making nuclear fusion power work should be very easy since we are tantalizingly close to that already today.

But if you still want this as a plot-device, I would say: screw it with the laws of physics and just handwave it. You have already thrown Hawking out with the bath-water so you are free to make up whatever you want. :)

The garbage gets converted to gamma radiation... that IS Hawking Radiation. And it should boil away if you stop feeding it. So have your scientist discover that Earth just happens to be in a large patch of nearly-undetectable dark matter, and then discover that dark matter feeds a singularity just as well as regular matter. In other words, we aren't feeding it, but it gets fed anyway.

Problem solved, totally within current known theory. We know dark matter exists, but we don't know what it is, but it interacts through gravity, so theorizing that it would go to a singularity is easy. It might not create gamma rads itself, but it would make the singularity bigger.

[edit] Snyder005 below notes some difficulties with this idea. I do still think you could find a solution similar to the one I proposed, but it will likely take more physics questions to work out. Which is a great segue to my original closing paragraph...

And if that doesn't work for you, you still don't have to break the known laws of physics. You just have to propose new physics. Create a new theory that explains why the hole doesn't boil away. That's your license as a sci fi author. Just make it as consistent with today's science as possible so that you help readers explore science instead of leading them away from it. :-)

The previous answers talked about Hawking Radiation, but I propose you use a different method of generating the energy, known as the Penrose process. Of course this assumes you are willing to 'hand-wave' away the development of any such black hole, but otherwise this process would not violate our current laws of physics.

In a nutshell, you form a rotating Black Hole, and throw matter at it. If you split the matter just right, one half falls into the black hole, and the other half escapes, with more angular momentum than the original. The result is energy extraction from the escaping half, while the black hole's spin slows down, thus obeying the laws of physics. Energy is extracted from the black hole's spin.

At some point your black hole will slow down too much and you won't be able to extract more energy. How do you keep generating energy? Simply keep throwing matter into your black hole, but don't split it and let it all fall into the black hole. This will add angular momentum and increase the spin of the black hole, readying it to generate energy again!

How You Can Make It Work

In terms of your story, lets say your scientist has a breakthrough and creates a stable rotating black hole. He/She then decides to solve the energy crisis. After some calculations he/she decides if they throw matter at the correct incidence angle, speed, and quantity, they can use the Penrose process to extract energy, while also balancing any Hawking radiation. Even better, they will throw all the worlds waste into the black hole and solve the trash crisis as well.

However something goes terribly wrong, when (by accident, sabotage, miscalculation), more matter is thrown in than intended and the black hole's growth overcomes it's rate of radioactive dissipation, and it starts to grow uncontrollably. For instance, perhaps the "feeding" process is automated, using probes to monitor the black hole's mass and spin, but the spin monitor fails, so the program thinks the black hole is not spinning. The program then starts "feeding" the black hole in an attempt to start it spinning again, unknowingly causing uncontrolled growth.

The major plot hole is that no one would build such a power generation system without first checking to see whether black holes really do evaporate via Hawking radiation. Why? Because Hawking-radiation evaporation is a very violent process, and you'd want to make sure you could contain the process of "shutting down the power station and letting it explode". So you'd test things out by first making really small mini black holes somewhere out in space and letting them decay. (And then even if it worked, no one would want such a power plant anywhere near them in the first place.)

There are two potential ways to get power out of a black hole:

(This would only work for black holes at least a few million tons in mass, because the Hawking radiation from a very small black hole would probably be intense enough tend to push away the stuff you're trying to feed into it, and even if it wasn't, you would probably have to send the mass in faster than the speed of light, which isn't possible.... Also, the Hawking radiation increases as the black hole gets smaller; for black holes that aren't large enough to destroy a city when you stop feeding them [see below], the transient power output is tremendous, so the processes of feeding the black hole and containing the power output would be rather difficult...)

So what happens when you stop feeding it? A black hole with initial mass of 230,000 kg will decay in about 1 second, releasing energy equivalent to 5 trillion megatons. An initial mass of 1 kg decays in about $10^{-16}$ seconds, releasing about 20 million megatons. A 1-milligram black hole decays in about $10^{-26}$ seconds, releasing about 20 megatons. (See here for formulas. These are crude, and more correct versions might change the results by factors of ten or a hundred, but that won't help you.)

You can see why NIMBY opposition to a mini-black-hole power plant might be pretty strong.

Is it possible to slow down feeding the black hole, instead of totally starving it days (or years before planning to shut down the power station?) so that the explosion is not as violent, but gradual and controlled?

No, that will actually make it worse.

The problem is that as the black hole gets smaller (by losing mass-energy to Hawking radiation), it gets hotter and thus radiates more. When it's very small, it radiates with enormous power. A 1 kg black hole would have a power output of $3.6 \times 10^{32}$ watts -- a rate of about $10^{23}$ megatons per second. And bear in mind that you would have to feed it at least that much mass-energy equivalent each second (if that's even possible) to keep it from getting smaller and hotter and more luminous.

Really, the safet way to "shut down" a black hole power station is to shove lots of mass into it, so that the Hawking radiation goes down and the lifetime goes up. If you can boost the mass up to about one hundred billion tons or so, then the Hawking radiation will only amount to about 30 kilowatts and the lifetime will be about 100 billion years, so you can let some other poor bastard (civilization) worry about its ultimate fate.

[Edited to correct calculations and address question in comment]

Not the answer you're looking for? Browse other questions tagged physics science-fiction black-holes singularity quantum or ask your own question.

10
Would the Hawking radiation from a small black hole make a feasible propulsion source?