How can I Determine the Litter Size of a Species?

Litter size varies vastly even in just the world of mammals, from the single spawn of an elephant to the up to 30 children an opossum can have. Obvious, litter size will determine population, cultural views of children, child rearing and even the family dynamics.

Is there a good solid rule for the amount of children a species should have? Perhaps relative to their size or age?

Litter sizes are influenced by how many offspring an organism needs to produce to carry on a species. Greater numbers of offspring, and thus larger litters, are selected for when extrinsic mortality rates are higher. Insects produce hundreds of offspring to offset their significant infant mortality and predation rates, and short life spans, while long lived mammals like elephants with comparably low premature death rates can afford to put large amounts of effort into protecting the investment of a single offspring.

I got curious, and compiled some data on lifespan and litter size. I was unable to find data on what percentage of species's members survive to adulthood, but I do believe the graph below well illustrates the idea that longer lived creatures have fewer offspring, and thus smaller litters. 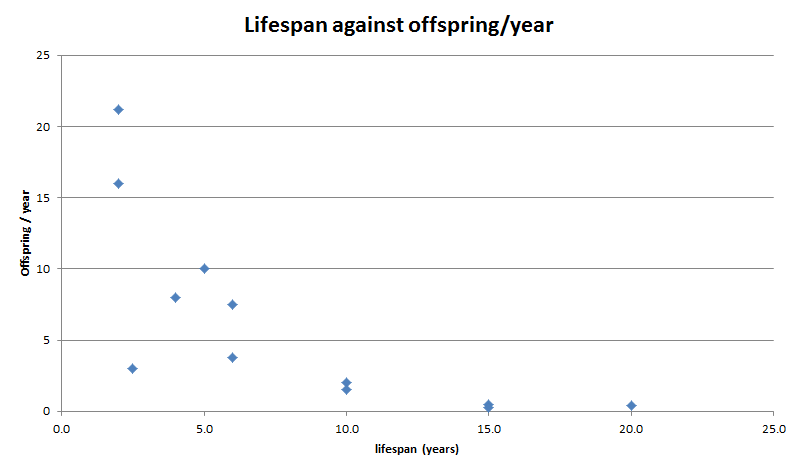 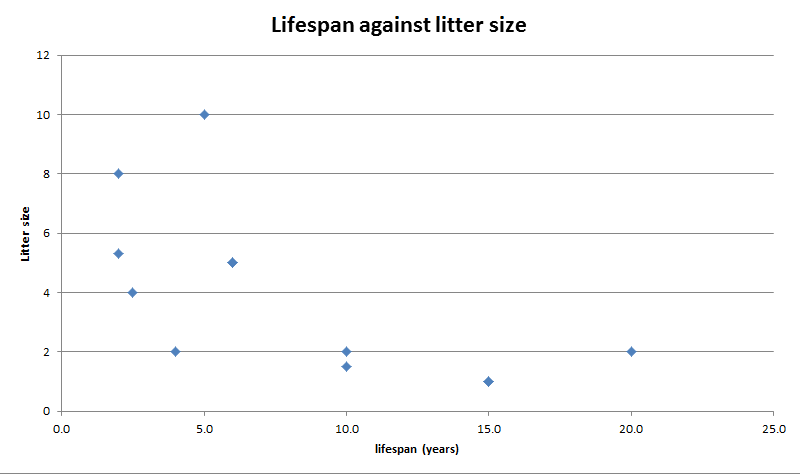 And the raw data, if you're curious. The numbers aren't incredibly precise, but they should be accurate enough for these purposes.

Edit: Here's a google sheets link to the data I compiled, so you can play with it if you'd like. Most points draw from more than one source, but the raw data typically represents the the median of the top few google results. Where ranges were given, I took the middle value.

Edit 2: Thanks to @Remi.b for factual corrections.

What types of animal are likely to be r-selected (have large litters)?

r-selected species are those that place an emphasis on a high growth rate, and, typically exploit less-crowded ecological niches, and produce many offspring, each of which has a relatively low probability of surviving to adulthood (i.e., high r, low K).

In unstable or unpredictable environments, r-selection predominates due to the ability to reproduce quickly. There is little advantage in adaptations that permit successful competition with other organisms, because the environment is likely to change again. Among the traits that are thought to characterize r-selection are high fecundity, small body size, early maturity onset, short generation time, and the ability to disperse offspring widely.

Organisms whose life history is subject to r-selection are often referred to as r-strategists or r-selected. Organisms that exhibit r-selected traits can range from bacteria and diatoms, to insects and grasses, to various semelparous cephalopods and mammals, particularly small rodents.

What types of animal are likely to be K-selected (have small litters)?

K-selected species display traits associated with living at densities close to carrying capacity, and typically are strong competitors in such crowded niches that invest more heavily in fewer offspring, each of which has a relatively high probability of surviving to adulthood (i.e., low r, high K). In scientific literature, r-selected species are occasionally referred to as "opportunistic" whereas K-selected species are described as "equilibrium".

In stable or predictable environments, K-selection predominates as the ability to compete successfully for limited resources is crucial and populations of K-selected organisms typically are very constant in number and close to the maximum that the environment can bear (unlike r-selected populations, where population sizes can change much more rapidly).

Traits that are thought to be characteristic of K-selection include large body size, long life expectancy, and the production of fewer offspring, which often require extensive parental care until they mature. Organisms whose life history is subject to K-selection are often referred to as K-strategists or K-selected. Organisms with K-selected traits include large organisms such as elephants, humans and whales, but also smaller, long-lived organisms such as Arctic terns.

Prey species tend to have larger litters than predator species. Species that need a lot of parental attention have smaller litters. Litters are smaller when food is scarce.

These are all points I learned from David Attenborough over the years. :-)

What sort of baby do you want them to have?

The r-selected type of creature which other answers have mentioned (small with large litter size), tend to give birth to helpless babies which cannot do anything for themselves. Blue tit chicks, kittens and mouse pups, for example, which are blind at birth, can't walk, can't find their own food, and so on. These are termed altricial offspring

Exception: animals which have no parental care, like insects. Fly maggots and butterfly caterpillars are from large litters but can look after themselves from the moment they hatch.

The K-selected creatures (big with small litter size) tend to give birth to well developed babies which can walk within minutes or hours and can run/swim at full speed within a day, to keep pace with mum. A caribou calf or a dolphin calf, for instance. In species which don't feed on milk, the baby can also feed itself. So a hen or duck shows her babies what is edible, but doesn't collect food for them. These babies are termed precocial.

Exception: being a prey species will tend to drive you in this direction as soon as your body size is too big to hide your babies in burrows. Baby has to be able to escape the snapping jaws of the carnivores! However wild boar still have large litters

Extremely Notable Exception: human beings. We are a big K selected creature with a helpless baby. Human babies don't even learn to crawl for several months after birth. Compared to chimp babies, they are hopelessly underdeveloped. This contradiction is evolution in action - becoming bipedal and big-brained has forced a helpless baby on humanity as a compromise.

Soooo... if you want creatures which are just humans with the serial numbers filed off, make them big creatures with small litters of helpless babies.

However, if you want them to be a more 'typical' big mammal, they'll have small litters of well developed babies. In human terms, they'll give birth to a child which is as large and active as a toddler.

So, this answers your question in a different direction, but for mammals, a good guess at litter size is half the number of nipples. Litters are sometimes bigger, and sometimes smaller, but the ability for the mother to feed her young tends to control mammalian litter sizes.

For egg laying species, the litter size seems to be a function of how many eggs you can fit in the mother (see the Kiwi bird).

I would say, no, there is no good solid rule that exists. Birth rate and parental investment are strategies. If the strategy a species "chooses" results in a birth rate that lags their death rate, that species will go extinct.

We need to remember that there were millions of extinct species, that for very long periods, had solid winning birth rate strategies and then, due to some environmental change, that strategy, unchanged, became a loosing strategy. If we had asked the average passenger pigeon whether or not he thought his birth rate strategy was a good one, I'm sure he would have answered "you betcha" anytime before 1800. But then over the course of a very few years, that strategy turned out to be for the birds.

At the end of the day, we might consider the idea that NO FIXED BIRTH RATE STRATEGY WILL BE SUCCESSFUL OVER A LIMITLESS PERIOD OF TIME. The more dynamic the environment, the more likely a fixed birth rate strategy is to move from successful to failing. Many species do exhibit variable birth rates directly impacted by various environmental factors such as food availability or weather conditions. Variable or Reactive birth rate strategies may provide some protection against strategy failure due to dynamic environmental changes.

So, at any moment in time, the environmental conditions at hand will result in a certain death rate for a species, depending on their adaptation to the demands of that environment. If the species has a birth rate strategy that results in a positive population growth, that species will survive or thrive. If not, that species will decline until the environmental conditions shift back in their favor or they go extinct.

What this means is, refer to cinnamon18's answer above - choose what your death rate will be for this hypothetical species, based on the environment you design for them to live in and the adaptations you give them, then choose a birth rate that results in a slightly positive population growth and you will have selected the strategy that you would have been most likely to observe if your species had evolved naturally and you had observed them at most any time during their existence from speciation through extinction.

-2
Increasing the Rate of Multiple Births in Humanoids?
3
Physical causes of multiple births in humans?

35
Evolution of species with separate sapient and non-sapient forms?
21
How can I Determine the Caloric Intake of a Species?
7
How can I determine the Lifespan of a Species
19
How to limit the proportion of a Force sensitive population?
25
How do genetically modified rodents cause the apocalypse?
11
Anatomically Correct Modular Body Plan Animals