In my story I'm trying to get a more Quentin Tarantino-esque feeling, and what goes best with his films? BIGGER BOOMS.

So. Let me start by saying, I understand international treaties like the Hague Conventions prevents this from happening in the real world. Well. So we hope.

My baddies are particularly evil. Most would describe them as dastardly and diabolical, and they've come up with a new way to destroy people who aren't loyal to their cause. In a fit of extreme evil, they've come up with hollow point bullets filled with alkali metals, then sealed in with resin, causing explosions within flesh as the projectile enters the body and reacts with the body.

Would this be a feasible way to conduct incredibly violent and gruesome warfare and gunfights?

It's possible, though not common to pack rifle and shotgun projectiles full of all kinds of things. An excellent example of this is taofledermaus on YouTube. He has shot all manner of weird materials out of his shotguns with varying degrees of accuracy and lethality.

In the case of highly reactive alkali metals, care would need to be taken to ensure no premature explosions. One would also need to be careful about target selection since hollowpoint rounds are ineffective against armored targets. That said, using the proposed bullets against soft targets such as flesh would be devastating. Hollow point rounds are well know for opening really large holes in flesh, as shown below from this video. Compound these enormous holes with fragments of cesium that will explosively react to water in the flesh, causing secondary wounds much deeper than the original round could generate. This is scary stuff. 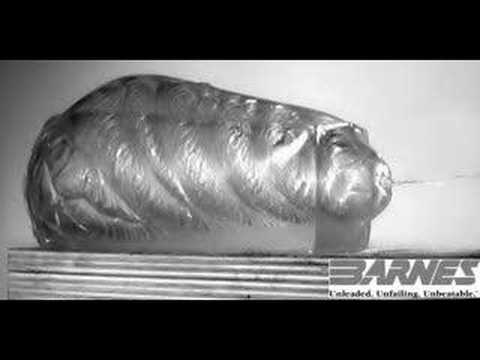 Yes, but it depends on engagement type as your question asks two question...gunfights vs warfare.

Alkali metals are significantly softer than most other metals (potassium can be cut with a butter knife). Had the bullet flown through the target this would have little effect, however the softer bullet makes it more likely to stay within the target and bounce around until reacting (not unlike how a hollow point bullet 'mushrooms' after striking a target). Yes, that might be messy.

However this comes with a trade off as the bullet will be less accurate (wind also plays a role here), have it's range suffer, and almost entirely lack the ability to penetrate Armour (bullet proof vests become more valuable here).

So this gets into engagement. In a 'street' gunfight...range is usually short between two unarmored targets. In this case...yes, it'd be explosively gorey and effective. In a military engagement however, the additional resources and preparation usually means the gunfire is at a slightly longer range and involved armored targets, and in this case the alkali bullets are likely less ideal.

Considering the sorts of mayhem already available out there, you seem to be going about things the hard way.

For small arms there are armour piercing rounds, incendiary rounds, hollow points, "safety slugs" designed to rapidly expand and dump all their energy into the target, 4.7mm rounds with asymmetric noses to cause them to rapidly tumble in the target, 12 gauge grenade rounds for shotguns, 25mm grenades which can be programmed to airburst over the target.....

Since these bad guys are "diabolical", they will probably get more bang for the buck by choosing "where" they shoot their targets rather than what they shoot them with. Being gut shot or kneecapped will cause a great deal of pain and suffering. Of course that requires very careful shot placement on the part of the shooter. The general rule in a gunfight is to aim for the centre of visible mass (to maximize the probability of getting a hit), and to keep firing until the target is down (so they are not shooting at you).

If it is just going to be a gunfight, then the ammunition chosen will have to reflect the expected target type. Shooting safety slugs at a person wearing body armour is not going to be very effective, but armour piercing rounds from a rifle can go "through and through" an unarmored human target without immediately stopping them (unless you hit a bone or vital organ).

Without knowing more than Quentin Tarantino-esquea setup, my recommendation is the bad guys should use sawed off 12 gauge shotguns loaded with 00 magnum shot. This provides for pretty violent gunfights at short range, the ability to deliver gruesome damage to human targets and satisfies the requirements for a successful gunfight.

As far as warfare is concerned, there is already far more than enough "stuff" out there to ensure gruesome outcomes for everyone.

They would not work if the people are wearing any sort of bulletproof armor; an extremly thin Kevlar plate would work. The alkali bullets make big explosions when hitting water, but can bounce off of plastic bottles. See The Backyard Scientist on YouTube.

Not the answer you're looking for? Browse other questions tagged reality-check weapons metals or ask your own question.

5
How would a chemically powered gun work?

4
Plastic coated bullets
4
Advantages of Ball bearing projectiles over Bullets?
47
Effects of bullets firing while in a handgun's magazine
13
Is a sword that deflects bullets feasible?
0
Remote Control Bullets
8
Is making bullets from scratch possible?
2
Electron Bullets
1
Plasma Blades vs. Bullets
3
Usability of frictionless bullets
9
What are the potential pitfalls when using metals as a currency?