Purely hypothetical question here. Would it be feasibly possible to have a planet entirely covered in a dense network of interlocking trees? 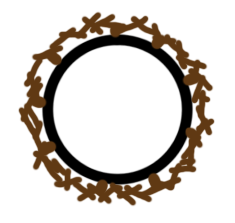 The idea is that the trees themselves act as the 'crust' of the planet, with virtually all life living on them. The planet could be a water planet far below, allowing plenty of water for such a structure to grow, and nutrients from the animals living in the water and on the trees themselves would provide the necessary nutrients.

Is such a structure possible? If so, what would its prominent features be?

Obviously there would be a bit of a support issue, which is where the interlocking part comes from. Think along the lines of a Banyan tree. Get a big enough tree to curve with the planet, and maybe get some flotation device at the base, and I would imagine it would keep itself up. For that matter you could break it up into a bunch of small trees and have the interlocking tops form leaf 'sails' and go cruising around (that was a purely random idea off the top of my head, and not really related to this question in any way whatsoever).

Okay, here's an idea for the development of such a situation. Start with floating plants, sustaining themselves on the surface of the planetary ocean. The only problem - they're trying to obtain nutrients through roots reaching down, but this far up those nutrients are few and far between. By interlocking with one another, the plants can increase their mass, making themselves more resistant to the current - which means that water rushes by them faster, and they can catch more food.

Gradually, this interlocking turns into forming floating rafts acres across, and a new form of life develops - land-dwelling plants, whose seeds find their way onto these rafts and start leeching from the water-plants they're standing on. In response, the water-plants have to group up even more (to improve their resource-gathering capability) and build more robust structures (to support the ecosystem developing on top of them). Simultaneously, they start to grow taller and taller, trying to reach up past the forest evolving on top of them.

Now, of course, buoyancy is a problem - as the forest gets bigger and bigger, our water-plants get pushed further and further into the water. But that's okay, that's where they want to be, because that's where the resources are! As long as they have leaves near the top for photosynthesis, they're happy to let their roots get pushed down to the ocean depths.

Finally, here's what we have: a planet where the only "solid" surface is foliage. The planet-wide forest is mostly parasitic plants leeching off of a tree-like scaffolding. As you descend down, the other plants eventually disappear (no sunlight, so they can't survive that low) and all you see are trunks of the scaffolding trees. Eventually, you hit water - and you see vast amounts of roots stretching underwater, displacing enough water to make up for the weight of the forest on top of them.

It's not exactly "interlocking trees", but it's about as close as I can get.

The problem here is that you have presented a potentially viable final state which is very difficult to evolve from a scratch.

Think about this: how would trees even come to evolve at all at a planet where there is no surface to provide support for their roots? On Earth, it took evolution nearly 40 million years from Cambrian to come up with woody plants and then yet another 30 million years or so for forests to evolve, and all that occurred while a solid surface was available for plants to grow on. On your planet there is no solid surface at all. How are trees even going to appear at all?

The next issue with the scenario is that even if trees are accepted to somehow come into being, how are they going to start interlocking branches when they are freely floating on an ocean surface? Consider a 3 feet tall plant, floating on the surface of an ocean. The larger it gets, the more it sinks in the ocean so that at no point are its branches more than a couple feet higher than the ocean surface. How are such trees going to form an interlocking network of branches?

Extremely unlikely scenario to evolve naturally, if you ask me. Even if you have a race of highly resourceful aliens with advanced technology, it will take them a lot of headache and time to build a system like this.

In order to get to the final state you mention, you are going to have to radically alter your initial state, which other answers hint at. Our planet's surface is mostly water, and your planet will also need this trait, but it will need to be much more evenly distributed. Instead of a few giant oceans, you need all of your water in numerous moderate-sized lakes scattered all over the surface.

Then, your planet is essentially one giant lake at the end of the pond and lake life cycle. Over the millennia, detritus from all the life living along the lake settles to the bottom. A young lake has a sand or rock bottom, older lakes have decaying matter forming a sloppy mud. At the end of the life cycle, the lake almost completely fills in; at this stage we tend to call these swamps or bogs instead of lakes.

I've been to places (within New York's Adirondacks) where you see apparently solid ground with weeds and trees and shrubs growing all around, but as you walk along the ground ripples and waves with your footsteps.

Another issue you need to overcome is climate. The scenario I describe is most prevalent in temperate climates and deciduous forest biomes. It would be very surprising to find bogs in either Svalbard or the Sahara. In other words, if there is any diversity in climate or ecosystem on your world, hallmarks of this here earth, then the house of cards will fall down. If you can hand-wave that away and have your planet be almost uniform throughout its entire pre-history and across its entire surface, it just might work.

Start with See my answer here on biofilms that evolve into floating (then flying) islands that support a whole ecosystem.

Then take the same turn that the Earth did in the carboniferous and develop woody parts and tall trees. The improved structural rigid forms takes over the plain balloons as the dominant form.

So, I think this is a plausible way to have a waterworld develop “land” that is biological rather than geological.

Not the answer you're looking for? Browse other questions tagged reality-check planets flora .

2
Feasibility of Continent Spanning Trees
0
Is there any upper limit on the size a plant can reach?
9
How would a giant, living, flying island evolve?
11
How could I create a believable Tree World, in which the Trees would float in the oceans, they would grow on surface of water, horizontally

10
Interlocking, ultra-high forest, is it possible?
6
Magic that Alters Living Cells - Windows in Trees?
5
Tree volcano? (A "treecano", if you will)
11
How could I create a believable Tree World, in which the Trees would float in the oceans, they would grow on surface of water, horizontally
4
How Can I Get Giant Trees on Venus?
5
Reality Check: Low-Hanging Banyans
27
Would glacier 'trees' be plausible?
2
Another Giant Tree Attempt
6
Hanging World - Trees