If there existed a planet that was made completely of liquid water, no solid matter at all, what would the core of such a planet be like? Let's assume that this planet has conditions similar to earth, so that it could support liquid water at its surface, with ice caps at the poles. But there's no matter of any kind except for liquid water, pure H2O. The surface is basically one big ocean. But what would happen if you dove down into that ocean? There would be no solid ocean floor in the traditional sense, but weird things would probably start to happen due to the pressure. Would the water be pressurized into ice? What abnormal properties might this core-ice have? How gradually would this happen? Would the core be hot or cold? If you could survive the extreme pressure, would it be possible to make it all the way to the core?

For planets the approximate size of Earth You would find Ice VII, X, or XI. Possibly even liquid water existing as a supercritical fluid.

This is a surprisingly hard question, and depends on the radius and mass of the water planet in question. A water planet of Earthlike mass would definitely not have an Earthlike radius, and it's difficult to say exactly what its radius would be precisely because water is so damnably weird with so many different crystalline structures at different temperatures/pressures.

Have a look (and mind the logarithmic nature of the Y axis, and the moderate range of temperatures covered): 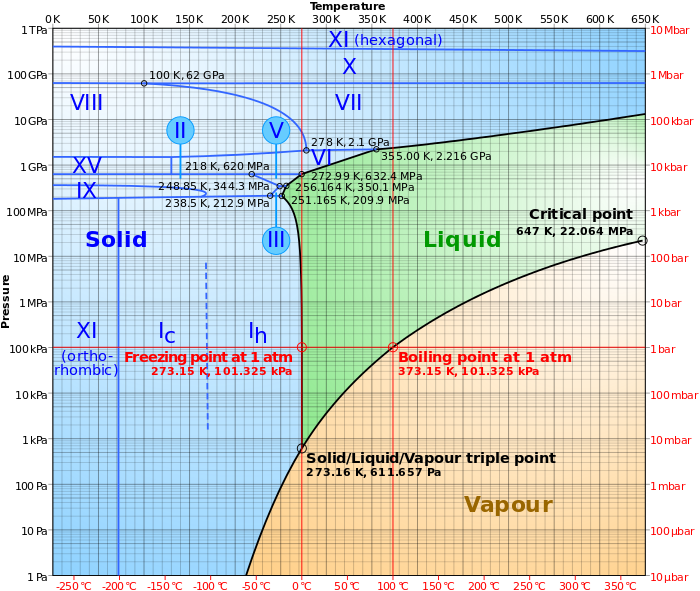 Every labelled region on that diagram has different structural properties. As a point of reference, pressure at our planet's core is estimated to be in the neighborhood of 330–360 gigapascals. Since Earth is made of much denser stuff than water, we can probably take this a comfortable upper bound on an earth-radius water world's internal pressure. As you can see from the phase diagram, water at this pressure would be Ice X (assuming a moderate temperature, which is a poor assumption at a planet's core, but these are the data I could find), distinguished from Ice I–IX by its novel crystalline structure. In fact, Ice VII, X, and XI are the only ones one this diagram suggests could exist in a planet's core (which would, again, be very hot as well as under great pressure). The boundary between fluid and solid phases of water also goes to higher pressures as temperatures increase. In a particularly hot and small world, you could find plain old liquid water at the core, or more likely water existing as a supercritical fluid. 2

It is hypothesized that at even greater pressures, well above 1000 gigapascals, water would take on metallic properties. You'd need a truly massive water world for that to occur naturally at its core, however, perhaps approaching the limit of stellar fusion. Jupiter is thought to have internal pressures in excess of 3000 gigapascals, but Jupiter contains some materials significantly denser than experimentally verified phases of water, and is as you know, quite large. In addition, at least one theoretical prediction regarding the metallic phase of ice expects it to occur only at pressures in excess of 5000 gigapascals. (However, those endorsing more moderate theories placing it nearer 1000 gigapascal do indeed expect metallic ice to exist within Jupiter.) This site (http://www1.lsbu.ac.uk/water/water_phase_diagram.html) has extensive information on phases of water, including a more expansive phase-diagram that includes water as a supercritical fluid and the metallic phase of ice, though the latter is only theoretical.

As for the possibility of traversing the core, you can pretty much forget it. It's hard to imagine pulling together enough handwavium to help a human body survive pressures on the order of 100 megapascals or above. Even considering an autonomous drone core-explorer, it doesn't look good. For a solid core of exotic Ice VII, X, or XI, as you dig into it the supercritical fluid water above would immediately flow into any hole you dug and freeze into the depth-appropriate phase of ice, arresting your progress. (However, some exotic ices are metastable at temperatures and pressures other than those at which they are created, so if you have need of exotic ices, you might be able to mine them with a handwavium digger.) Even traversing the supercritical fluid would be an interesting engineering challenge, as supercritical fluids are, well, kinda weird. We actually use supercritical water as a means of rapidly oxidizing hazardous wastes 3 that would otherwise persist effectively forever on the scale of our civilization, so good lucking carrying a sacrificial anode strong and large enough to offset that.

It is speculated that it would be just ice and compressed water (different from ice):

"Their abyssal depths would be so deep and dense that even at high temperatures the pressure would turn the water into ice. The immense pressures in the lower regions of these oceans could lead to the formation of a mantle of exotic forms of ice."

126
Could a planet made completely of water exist?
15
What would the minimum mass of a water world need to be to form ice Vll, due to pressure, at its core? What about ice X, ice Xl, and higher?
4
Could a terrestrial planet have water for a core?

6
How would a species evolve in a world exclusively made of water?
5
Is life possible on a world where the water floats in the air?
15
What would the minimum mass of a water world need to be to form ice Vll, due to pressure, at its core? What about ice X, ice Xl, and higher?
16
How would a free floating ecosystem on an ocean world function?
22
Is it possible to place a permanent probe on Uranus?
4
Could a terrestrial planet have water for a core?
3
Temperatures and water level during very long eclipse
7
How big could a water planet be and not have an ice core?
10
Reality check: Can Polar CO2 lakes coexist with an equatorial H2O ocean?
7
Can my Planet Have Liquid Water at the Poles -- But Only During the Winter?