There are two societies. One highly advanced with AI, posthumans, post-scarcity economy and off-Earth resources. So gold and platinum is what a Mercury base resident just calls “rocks”. They have emerging nanotechnology of the full-blown utility goo variety developed a few years in, analogous to what Apple ][ and CPM machines were to the information age: amazing revolutions but just getting started in terms of features and power. They also have superconductors, and ordinary electronics/photonics/spintronics far in advance of what we have today in 2016.

The other society is the level of tech we have today but on hard times socioeconomically so they don’t get the full benefit. Think of slums and urban gangs in control with a strong government absent, busy with larger problems in a “mild” apocalyptic decline.

Now the advanced society decides to send a mission to this particular city, to help them recover. They can afford to take care of everything, make great new buildings appear as if my magic in a span of days, feed everyone, educate anyone who will listen.

But the big problem is the people's current social structure, dominated by gangs and lawlessness. Replace the slum with a shiny new city and the anti-social people will misbehave and tear it down again and oppress each other.

So, a more subtle approach is needed. As an introduction, the missionaries are giving everybody a gold coin. There is a pile in the community center and you can go handle them and appreciate the pile, but can only take exactly one. That’s easy, with security measures in the building around where the pile is stored.

But afterwards, the coins cannot be stolen. Each is registered to an owner and the missionaries will take action if one is taken from someone else. Now certainly people carrying around these coins will be carrying around in fact powerful surveillance devices everywhere they go and gather!

A missionary staffed police force can know who took the coin from whom and show up to deal with it.

But, I want something more astonishing: the coins, worn as talisman, can protect the owner against violence from the gangs. Not just an automatic 911 when he’s in trouble, but seem to “protect” him in ways that seem like magic to those involved in the altercation.

With the technology as noted, what can the coins do to the owner and any threats from other people?

Well, you've already got surveillance capability, so add in an AI to recognise weapons and hostile attacks - so you tell when someone may be a threat to / is attacking the wearer.

Then deal with the attack... depends what you have available. With a laser, you can aim for the attacker's eyes and dazzle or blind them. Or use lasers to ionize a couple of paths to the attacker and run a high voltage discharge "lightning bolt" down them. Or (if you can do funky interference tricks to make the sound directional) go for a sonic stunner/disorientation/stun grenade effect. And you could inform the wearer of things he might need to worry about... or (given suitable city surveillance) give the wearer directions to get away - or avoid the bad guys in the first place.

If your nanotech is good, then disassembling weapons/ bullets as they strike, or fixing wounds, would be handy - but that requires the nanotech to be at the impact point. Probably easiest to just infect the wearer with the nanotech rather than trying to squirt it into position fast enough.

Infecting the wearer also helps with the other big problem - if all the sensors are in the coin, then it can only see things in front of it, and can't see someone sneaking up from behind. If the wearer has nanotech, though, you can arrange for that to keep an eye out on the surroundings that the coin can't see,

The coin really needs to be a disguise for "utility fog". The coin is simply built of millions of nanomachines which in their "resting state" resemble a gold coin. How many "foglets" would be contained in a coin would depend on the size of the coin itself. 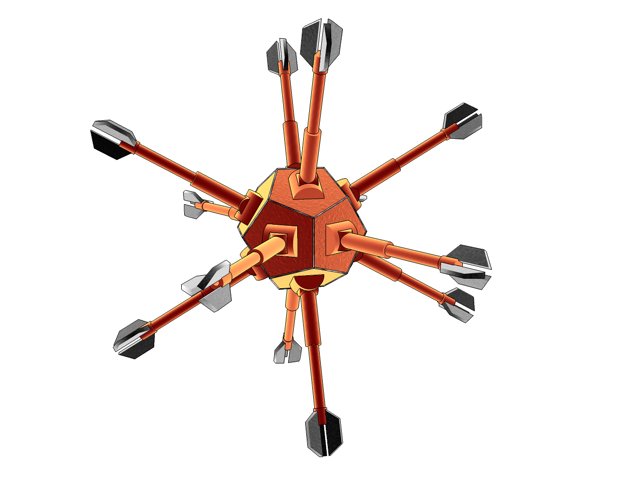 Once the coin detects a threat or an attack on the person carrying it, it would rapidly disassemble and the foglets leap into action. The usual response would be to for a shield to block an incoming blow, knife thrust or bullet. If there are multiple attackers, it might form a fine whip like filament and lash at attackers, striking weapons from their hands or trying to tangle and tie up limbs. Of course, given the small size of the reservoir, the filament could be fine enough to cut through skin and bone like a monomolecular knife. Depending on the sorts of constraints the developers have inserted, this might not be a problem at all, or it could be forbidden by the programmers. A cloud of "dust" flying into the eyes of the attackers might work as well, although a pair of shooting glasses would be sufficient to reduce the effectiveness.

The other issue is since the amount of "foglets" is so limited, the gold coin will not be able to deal with prolonged or large scale threats on its own. If the missionaries have seeded the environment with free floating foglets that join together with the ones released by the coin, then this becomes far more effective.

To make the overall program more effective, being able to eliminate violent gangbangers (either slicing them to death or calling enough utility fog to "bag" attackers and remove them from circulation) will reduce the overall amount of violence and criminality (lower level and opportunistic criminals will see what is happening and stop their activities or move away), but should also use the surveillance to identify the most promising individuals and families to be recruited and sent to space.

Give it some light projection ability to show pictures then it could personify the imaginary friends of kids. Even if you can't change the adults, the coins could do a major education campaign on the younger generation.

This scheme is likely to fail, because it fails to take into account human nature and the mechanics of social change. These gold coin talismans are reminiscent of A E Van Vogt's The Weapon Shops of Isher where citizens can buy weapons that can only used for defence against imperial power.

Apart from protecting talisman owners and keeping track of the coins if they're stolen, it's hard to see how effective they would be in transforming a society from apocalyptic to something more civilized.

Human nature being what it is, the challenge of people protected by a talisman will encourage the gangsters to try more and more ways to overcome the defences of the talismans and to take them off their owners. Old-fashioned phone booths were routinely robbed for their coins. Progressively increased theft-proof devices instead of inhibiting theft only increased the targeting of so-called thief-proof booths.

The talismans act are powerful surveillance devices. Nanotechnology can provide clouds of utility fog that might be used for defence. How the coins can have defensive mechanisms in and of themselves is puzzling, because it is hard to understand what weapons systems the talismans could be equipped with, and how they would carry them. If there are external weapons systems that can keep track of coin holders and can be deploy to protect them, that does make sense.

Many social change movements work effectively be recruiting persons who are likely to act as agents of change. Give them training and skills so they can become effective political activists, public service personnel which includes everything from local government, fire and police services, and garbage collectors. Even the most lawless society still has something resembling the remnants of civil government and a police force, the posthuman missionaries recruit and support these services and personnel. This is ordinary social and political change, presumably this will aided and abetted by extremely advanced technology.

Not the answer you're looking for? Browse other questions tagged science-based society nanotechnology or ask your own question.

34
Evolution of species with separate sapient and non-sapient forms?
10
In a nanotech future, how does government pay for itself?
3
What's strongest non-nuclear explosive I can make with nanotechnology?
12
Why do witches have non-magical bodyguards?
5
How Could a Disease that Lowers the Intelligence of Humans to Non-Sapient Levels Exist?
2
What makes magic artillery more powerful than a non-magic gun?
2
Scientifically plausible non-WMD parasite/grey-goo clouds?