Imagine a gas giant orbiting Sirius B, a hot Jupiter. 120 million years ago give or take, the star reaches its final stage as a red giant then collapses into a white dwarf, ejecting countless billions of tons of hot gas and plasma at high speeds. The death of the star and its subsequent release blasts away the gas giant's, well, gas, leaving just enough to form an Earth-like atmosphere around the gas giant's now exposed rocky core.

120 million years pass. Humans discover this planet, and decide to investigate it. Would it be possible for them to find prehistoric life when they arrive? Complex organisms too, like insects and land animals.

It seems like you've generated a chthonian planet, although typically, they're theorized to form when normal solar winds from a star slowly strip away the atmosphere, not the release of a star's outer shells as it evolves to become a white dwarf. For instance, Hébrard et al. (2003) estimated that HD 209458b may have lost only 1-7% of its mass over about 5 billion years, at a rate of $\sim10^{11}$ g/s. In fact, as a chart from Ehrenreich & Désert (2011) shows, this appears to be within an order of magnitude or two of the mass loss of most transiting exoplanets: 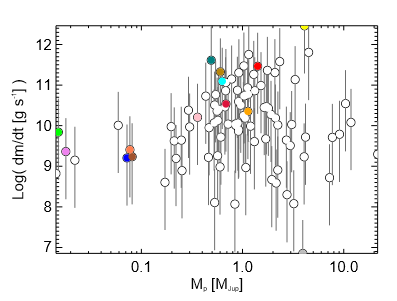 In other words, typical chthonian planet formation is a slow process, instead of a relatively quick and catastrophic one. I think the results could mean that the planet could be scathed by the shells of gas - relatively uninhabitable, compared to normal chthonian planets!

Things might be even more problematic, however. Check out this graph of the typical semi-major axes of hot Jupiters: 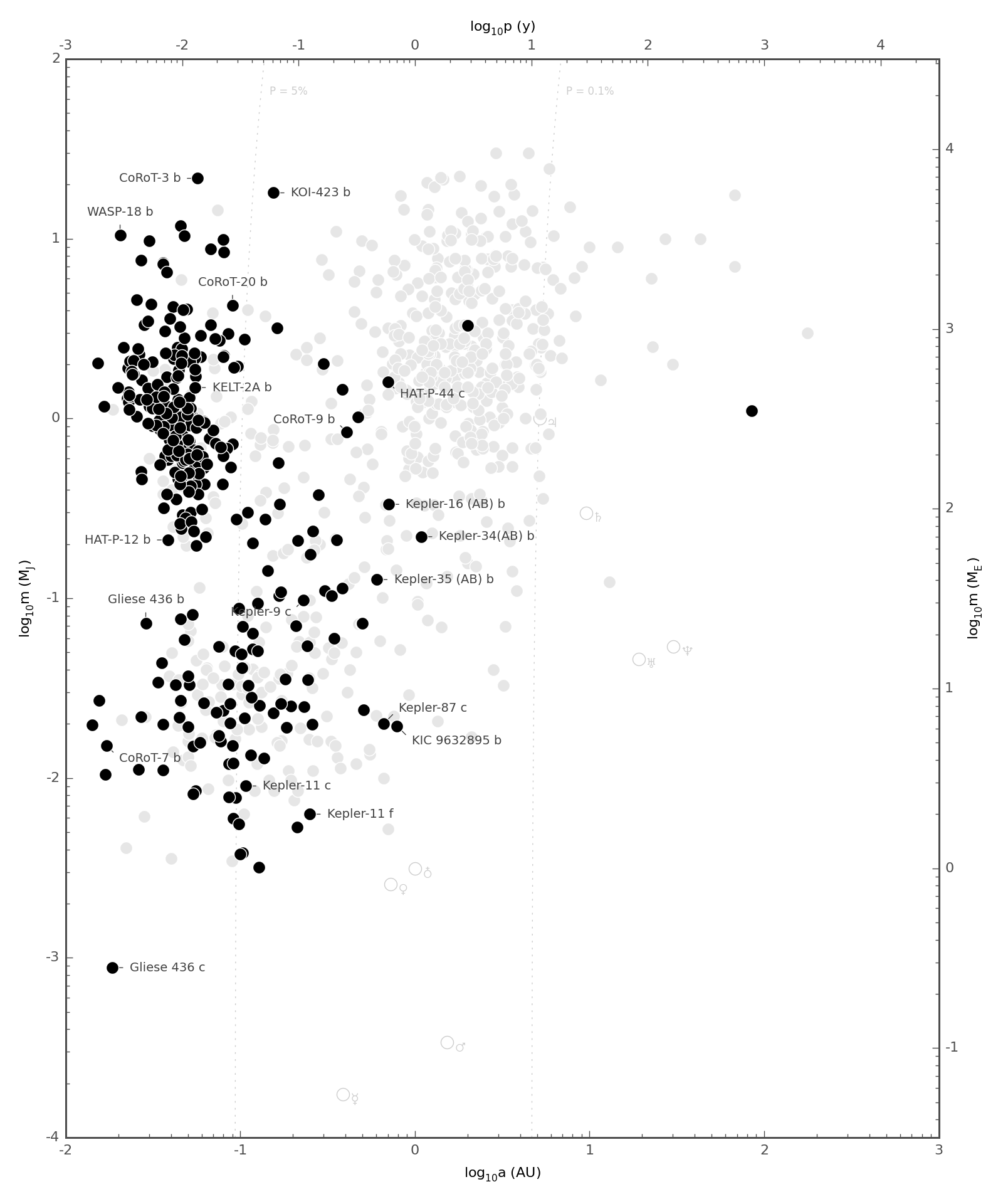 The vast majority of them are within about 0.1 AU of their parent star.1 Now, according to Liebert et al. (2005), the progenitor of Sirius B was roughly five solar masses. It clearly would have gone through the red giant branch prior to becoming a white dwarf. Current models (e.g. Schroder & Smith (2008)) calculate that Earth might be engulfed by the expanding Sun, which will have a maximum radius of perhaps 290 solar radii at the end of the red giant branch, 430 solar radii at the end of the asymptotic giant branch. That's a final radius of 1-2 AU!

Given that the progenitor of Sirius B had a mass of about five solar masses, chances are good that it would have extended even further. This means that any hot Jupiter around it should have been engulfed, unless it could have somehow gone into a transfer orbit that drastically increased its semi-major axis (see again footnote 1).

So let's say that the planet survives being engulfed prior to the formation of a planetary nebula. It still has some problems:

Yes, life can survive without oxygen, an atmosphere, or water. But I don't think any of those questions considered life on a scorched hellhole orbiting a pretty faint dying star.

1 As the star moves along the red giant branch, the planet's orbital radius may increase, but likely not by more than a factor of a few. It's maybe going to get as far as 0.2 or 0.3 AU - maybe.

It's very unlikely - but I don't think enough is known to allow for an absolute no (we only have data for 1 living world - who knows if the speed of evolution on Earth is at all typical).

It sounds like your planet starts out formed and cooled, so we don't have to include the time for that to happen.

Even if we allow for life to form essentially "instantly", you won't get Earth-type complex life anywhere near that fast: even when you have photosynthesis, it takes much longer for the oxygen content of the atmosphere to build up to the point where it sustains aerobic life (it has to react with a lot of minerals on the surface, etc. first).

The reason I say "probably" not is because an oxygen atmosphere isn't an absolute criterion for complex life. So, if the local life has some genetic characteristics that makes their speed of evolution very high, it might be plausible enough for SF.

You need some handwaving, such as life already existing on the giant’s moons. It has already gone through the steps of developing cells and a DNA code that is optimized for evolution, and formed complex eucaryote cells. Perhaps animals too, but they did not survive.

So after the reorganization of the star system, complex cells (eucaryotes) colonized the new Chthonian world. Maybe these were extremophiles living deep in the rocks of the original moon — but that would not evolve animals so rapidly. You need the recolonization to be done with life that already knows to make multicellular organisms. Maybe they were highly evolved biofilms that developed specialized cell types, depending on its position in the film, neighbors, and environment. That is, it already knows how to specialize different cell types with the same genetic code.

That’s the general idea. Recolonization took place with microorganisms that were able to survive the trip, but were already “advanced” in the features needed for multicellular plants/animals, even if those features had different uses.

HDE 226868 makes a good point that your proposed planet is contradictory. Let me try to improve on that:

First, it was distant to begin with, so the red giant left the desired result rather than swallowing it. Then it moved closer to the white dwarf to get warmer.

This kind of relocation involves something like the “grand tack”, as the planet interacted with a new debris cloud. Look at all the proposed mechanisms for planetary migrations, and see what you might get to apply naturally in the aftermath of the red giant phase. Another possibility is that interactions with other massive bodies can rearrange the system.

If you have another star (the companion), why not use it directly? Maybe the gas giant was a planet of the other star, and the two stars are rather close. It is close enough to the red giant to be reduced as indicated. Is it OK for the plot to leave it there?

If not, consider that the planet was originally circumbinary. In the aftermath, the orbits of the binary stars were affected (Mass loss and friction from the gas envelope), and the planet was captured by the new white dwarf in the final stages. Planetary migration mechanisms (involving the companion star too) circularized the orbit.

i mean, Earth need 3.5 billion years to evolve from basic single-celled to the weird worm that swam the Cambrian sea. And if the catastrophe completely wiped out life on your planet, it would take another 0.5 billion year for the microbe to evolve. Not to mention your planet isn't in a good condition for life yet.

This Chtnonian World should be needing a ton of luck, AKA a rain of ice asteroids carrying precious water and microorganisms, or some genetic material that could recombine with any eventual extremophiles left on this scorched world. Such extremophiles could have survived only deep inside the planet's crust, and the asteroid impacts would liberate them in conditions now adequate for recombine in some Primordial Soup...

But, I fear, after this stage the world would be again covered in a deep layer of ice, under which some microorganisms could still thrive thanks to the volcanic vents but not evolve beyond that stage in this horribly hostile environment

120 million years is an awfully long gap for the answer to be "no". The worst catastrophe life on Earth suffered, 252 million years ago, destroyed 70% of all terrestrial and 95% of all marine species. Complex ecosystems did not come back until ten million years later.

Not the answer you're looking for? Browse other questions tagged science-based space xenobiology .

17
Could complex, macroscopic life arise and exist without cells?
6
Would complex life evolve on this planet, and could humans survive on it without much outside help?
30
Humanity after 100 million years?
11
What is the maximum orbital time for my moon around my planet?
3
Feasible star + planet + moon combo? Did I miss anything that makes this system wildly unstable or otherwise impossible?
10
Relativistic Interstellar Combat
7
How soon does the Earth's surface re-solidify after the red-giant Sun is replaced with a different star?
6
The Earth and Moon resolidify under a bluer star, their outer layers evaporated and burned away. What do they look like now?
3
How to Create the Galactic Habitable Zone