I'm interested what would be the effects on human society if human sex determination system is different, while everything else is the same thus we still have both men and women.

In particular what if humans used Haplodiploid-like system, similar to ants & bees, where female gender (woman) develops from sperm and egg, while woman could produce sons via something like Parthenogenesis, if she decides to get pregnant.

Please note that ALL women & men are capable of reproduction, no hive/colony Queens ruling over infertile workers.

For my benefit, I'm laying out the heredity rules for this imaginary society. If I make an error and this isn't perfectly haplodiploid, let's just pretend this is how it works in this nearly haplodiploid society...okay?

So, in this society:

All men have no fathers, but do have grandfathers.

Daughters have mothers and fathers and are equally related to both, just like actual humans.

Fathers have only daughters, no sons, but their daughters all have 100% of their genes.

Mothers have daughters and sons, but 100% of their sons genes come from them, while daughters have only 50% of their genes (just like humans).

All son's of a single mother are 50% related, just like humans.

All son's and daughters of a single mother are 25% related from the sister's point of view and 50% related from the son's point of view. Insofar as a sister can expect a brother to carry 25% of her genes (she has an extra set of chromasomes he does not share) whereas the brother can expect his sister to carry 50% of all of his genes (since he has only one set of chromasomes).

All daughters of a single mother and father are 75% related.

Now assuming a Nuclear family with Mother, Father, daughters and sons, we could assume the evolution of this dynamic:

Fathers would care nothing for their sons and would want them out of the household so they would not take resources from daughters. But grandfathers would care and so sons might be expected to leave the house to live with grandparents at an early age.

Mothers would cherish sons, and want to lavish resources on them, placing them at odds with their husbands who care not at all for sons.

Mothers would care for daughters but to a lesser extent than sons (50% less).

Sons would be interested in finding a girl and having daughters.

Daughters have little interest in brothers, but still more than dad has in sons, but not nearly as much as granddad is rooting for grandsons.

So in one form of this society, males take wives. When a son is born he is tormented by dad and mom is punished for the impertinence of having a son. Sisters shelter him somewhat but he must flee the house for grandpa's protection. Daughters are doted on by dad. Daughters care for one another and the house hold has many daughters all encouraging mom and dad to get busy and make more sisters.

Mom continues to want to have sons and will do it on the sly if at all possible. Otherwise, she must periodically deal with punishment from husband and daughters when she produces an unwanted (to them) son.

That's just one imagining. The rules above could be used to come up with all sorts of other possibilities.

Whatever your model of sexual identity is now, historically most societies identified strongly with binary sexuality. Tolerance for people who deviate from that binary model has varied wildly from society to society, but the measure of binary as the "norm" has not. The overwhelming tendency towards patriarchal systems with varying degrees of repression of women is a strong indicator that sexual identity is fundamental to the human condition.

This thing you propose would change everything. Even physiological changes might well result. If you want specifics, cast your net more tightly, or engender a chat discussion.

Psychological changes due to different sexual chromosomes are none.

Psychological differences due to parthenogenesis would result in things like parents being more affected and collaborative to their haploids as being them actual clones, other societies however may develop farms of slaves where people simply clone themselves to make new slaves. This will result in a long history of division between diploids and clones like we had black and white schools and female and male schools the same will be for clones and diploids. Probably in some cultures enslaved clones will slowly become the norm and the situation will never change, this will lead to clone being less intelligence and more efficient at their work of slaves, they will probably also eat and live less than diploids and probably the clones would become the mainstream meat shields in all wars.

In the end you will have parts of the world where humanity would be exactly as we know it, while on the other side of the world clones would have evolved in emotionless tools and mankind would be weaker as the clones would do all the hard work...and some parts of the world where the only difference from our humanity would be instead of the Feminist movement the Clonism movement for the defense and equality of diploid and haploid rights. Then people on the internet would complain about ''third wave Clonism''.

For the same reason abortion would be easier, There would be no more people dead for infections after doing illegal abortions as they can now just get rid of the egg and solve the problem.

However, there would be also one reason less in favor of abortion, one of the main reasons for abortion other than being raped and the fact that everyone is a hypocrite that doesn't really cares anymore after the kid is born, is the fetus inside a person is actually a parasite.

But these are all possibilities, probably there will also be many religions worshiping clones or religions that think the clones are actually the soul of the individual reincarnated. Also, all the other religions wouldn't be the same for example if the fantasy characters known as Jesus Christ, Kali,Sophia, Thor,Zeus or Prometheus were haploids then everything would be different.

I'll start with fallowing assumptions to make matters simpler. And if I'm writing something wrong excuse my poor biology knowledge and just correct me.

So I draw the relatedness chart below and from what I could see: 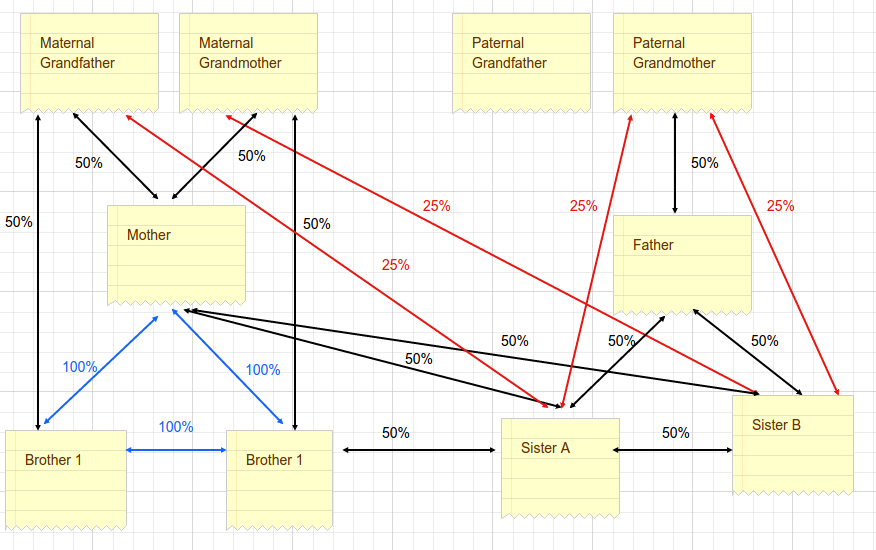 In short the world would be very different place then it's now. More cruelty & corruption, less development & sharing.

Not the answer you're looking for? Browse other questions tagged reality-check society gender or ask your own question.