What would happen if someone set a spear against a charging bison? [closed]

Let us say you are some young Lakota Sioux brave on the High Plains with your spear, and you have the misfortune of seeing an American bison headed straight for you at top speed while you are in a box canyon of sorts. Having heard apocryphal tales of how white-man was able to withstand horse-charges by planting the butt of his spear in the ground and angling it upward to cause the horse to impale itself during the charge, and not having many other options due to your unfortunate location, you decide to try setting your spear against the charge.

Do you wind up going home a hero, or being found dead on the plains three days later, gored/run over by said bison?

With a tough and dense enough haft, and a really solid set against a mass comparable to the animal in question, and most importantly, one of these: 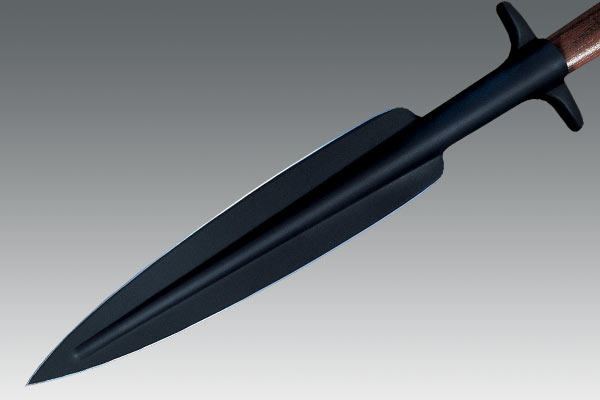 with a crosspiece to stop the animal in question from driving themselves right up the length of the spear and into you, you might accomplish that thing with minor injuries only.

Not with a light, short plains native spear though, which would probably bend and/or break on impact. Sorry, buddy.

When spears were used against cavalry charges it was en mass. Multiple ranks of soldiers would stand shoulder to shoulder presenting a wall of spears to the enemy. This is what would dissuade horses from charging into the formation.

In the case of a lone Lakota Sioux standing against a charging buffalo, its inertia will be enough to carry it into you, probably crushing you in the process. If your aim is true you may be able to fatally wound it. Which is a weak consolation prize when you've been hit by the equivalent to a hatchback crashing into you at 30 mph.

Now adding that the Newtonian force required to break a human femur bone is around 4000 newtons, the most likely occurrence in this situation would be that whether or net the spear impaled the bison it would quickly snap or be torn from the young man's arms, and the bison would continue to quickly run him over.

So this would probably not be our friends most promising course of action. Sorry!

Now I was asked about my calculations. To calculate the amount of force in any situation, we use the equation; Force = Mass multiplied by acceleration.

For the mass variable in our equation we can estimate the american bison at 2000 pounds (probably the worst case scenario). we can convert that weight to just over 907 kg. The bison in question will have a speed of 35 mph, so where do we get our acceleration? In this instance we are concerned about the acceleration of the young man's spear, as well as himself. The young man is not moving relative to the earth but he will be quickly accelerated when the bison collides with his braced body. Thus our acceleration (the speed at which the bison will collide with the man and attempt to move him), at 35 mph is 15.6 m/s.

Edit 2: Sadly I'm a bit rusty when it comes to calculating force, but thanks to some comments I was advised on what needed to change.

So heres our calculation of acceleration: 15.6-0 divided by 0.05(the time in seconds, about halfway between an estimate given me) multiplied by 15.6 m/s^2

So this equation will actually give us a larger amount of force, because now our estimated acceleration is 20 m/s^2

So when this best case scenario vs. worst case scenario are averaged out together it comes to about 16,300 Newtons! So after some recalculation and estimates, it seems the likely hood of surviving is even less likely, sorry again!

The shaft would snap; the tip would pierce the skin, then slide off muscle; the bison would get angry(-ier); and the idiot standing 2 feet away from an angry, charging bison would get trampled.

If he's extremely lucky, the bison would think this was a good enough job instead of doubling back.

Smarter money is on running to the canyon walls and staying there. If it comes after him, the bison will risk running into the wall and injuring itself.

Not the answer you're looking for? Browse other questions tagged fauna combat natural-weapons or ask your own question.

16
What fighting styles would claws lend themselves to in a bipedal intelligent cat-like species?
36
What would be the most effective melee weapon against heavily armored opponent?
22
What body armor protects against a laser?
12
How effective would a full set of plate armor be against wild animals found in temperate regions (bears, snakes, wolves)?
3
What would the fighting style of someone wielding a longsword-like arm blade look like?