What would allow a livable planet to have an always-night area, an always-day area and a day&night cycling area?

The "day area" needs to always be under sunlight and be hot enough to be unsuitable for human life.

The "night area" needs to never be under sunlight and be cold enough to be unsuitable for human life.

The "day & night cycle area" needs to have a cycle of day and night (obviously) and be suitable for human life.

Always and never mean that these areas should stay stable for a minimum of some thousands of years, with no specific maximum in mind. It also should have been in this state for at least a few hundreds of thousands of years.

The edges does not have to be absolutly still, as long as it does not have a significant impact over the course of this timeframe (i.e. it should not appear as a threat for sentient life in other areas by its motion).

The phenomenon needs to be natural (no intervention from humans or aliens). It has to be stable enough for life to have developed and evolved on the planet, and the planet should not be doomed in the near future because of it.

Each area should cover a significant surface (minimum 10–15%) of the planet. They can be positionned anywhere, as long as they do not form multiple small patches.

I asked an incomplete question with this problem in mind but merged with the first thought I had, a tidally-locked planet with two axes of rotation, that was answered as impossible (credits to rek).

Some ideas were proposed, but since I was too imprecise I have no idea if it can fills all conditions above (credits to John Feltz for both) :

Then add a small moon that orbits the planet at a very high inclination (for example parallel with the arctic circle and not the equator). (Add a secondary body in a geocentric orbit over the north pole that pulls the first moons orbit northwards allowing this) It's easily visible anywhere in the northern hemisphere, but completely invisible from the south.

Make the moon not out of rock but out of an incredibly reflective material.

Combine tidal locking with either high eccentricity or high inclination (or both).

You can see it now a little bit on the moon: it appears to rock back and forth and nod up and down a little, so the area at the sides will see the Earth bob up and down, rising and setting.

In a body orbiting a star, this libration will cause the terminator to shift, and anyone there will experience sunrise and sunset.

This effect can be significantly greater.

This effect doesn’t “doom” the planet. However, imagine interactions with other orbits that cause the inclination or eccentricity to change over geologic time. Life adapts to the twilight zone as it’s getting wider. Then it starts shrinking as the orbit circularizes, forcing life into narrower and narrower zones, with baked and frozen remains to show what once was.

Have a tidally locked planet with an axial tilt of 45 degrees.

The sun(star) will move, back and forth, along a 90 degree path in the sky. Adjustable Animation
One side of the planet will be facing the sun constantly, and the other side will face away from the sun constantly.

This circle represents the planet viewed from the side of the tidally locked face and not down the planet's axis of rotation.

The three regions that receives sunlight, are gradually fading into each other, with respect to planet curvature and the amount of sunshine at different locations.

I guess that this phenomenon is stable enough for life to evolve and not be doomed. Life would arguably have less surface area available and probably very strong winds coming from the dramatic temperature differences. I assume that the orbit can handle some eccentricity and other imperfections, without disrupting the tidal lock or the axial tilt.
I don't think this phenomenon is a case of an unstable equilibrium, like Lagrange Points.

But frankly I have no idea how to judge this properly.
Please supplement further judgements on stability.

Thanks for posing such an interesting question. :)

Tidally locked planet, so close to its star that even the "twilight zone" is uninhabitable. One glance at that hellish orb and you're literal toast. A super-powerful magnetic field keeps the atmosphere intact despite the intense solar wind.

Highly reflective moon, orbiting at 90$^\circ$ to the plane of the ecliptic. The habitable part of the main planet lies on the dark side, close but not too close to the day side. When the moon is visible - always a crescent, but lit up on that side by an ungodly hot sun - it gives decent light. When it's not, the place is totally dark, except maybe for a red, sinister glow on the horizon where the killer sun lurks. 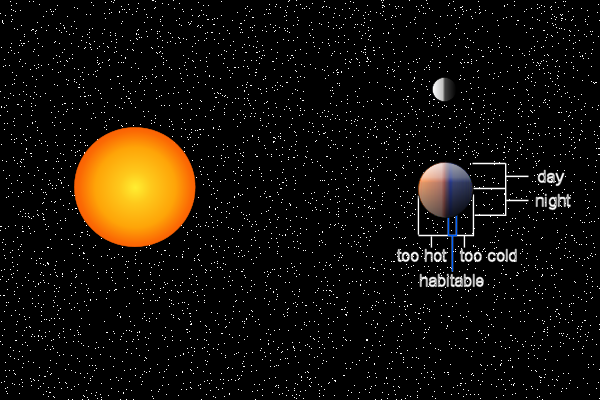 9
Can a situation exist where there is one pole that is hot and another cold on a planet?
5
Tidally locked planet with day & night cycle