In the never ending quest to get elves to live in trees, I am taking things one step further and attempting to get the entire city in a tree. Magic is not in the equation. The tree would start out looking like this from above: 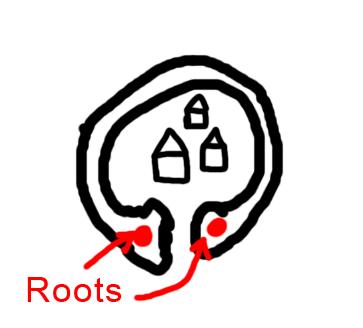 As time goes on, the tree would expand outwards, with the dual trunk marked 'roots' remaining in place while the circle grows. The city is within the circle, as shown.

You can think of it as people living in a hallowed out tree trunk, with one very large exception: the 'trunk' is only located in the area marked 'roots.' The circle part is basically one gigantic root, about as thick as a two story house. It would like this, from the side: 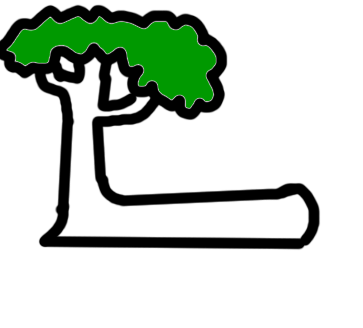 Is this design possible? Is there any reason trees like this would ever exist? This is for a fantasy novel, so you can make a few things up like creatures if necessary. My idea is that the tree creates a safe haven for animals (and people) within the circle, and then gets a lot of nutrients from them.

Details (as requested by Lord Dust)

It seems natural that elf trees grow out of elf circles (more commonly called fairy rings). These rings are formed by mycelia, or mushrooms. The mycelia alter the soil composition around it, causing the grass and other plants in the area to be affecting, causing the visual effect of the circle on the surface event when the mushrooms are not sprouted. Sometimes the mycelia depletes the soil nutrients, causing a circle of dead grass. Other times it produces chemicals beneficial to the plants, causing them to grow more lusciously than their neighbors. Our elf tree enjoys a symbiotic relationship with a type of mycelium. So much so, that the trees have adapted to grow their roots in the circle in order to maximize the amount of nutrients provided by their partner mycelia. The additional nutrients also cause the trees to grow spectacularly compared to their neighbors, large enough to protect a village of elves.

Imagine an area much like the eastern face of Canada's Rocky Mountains, but earlier in prehistory, when the central plains were, in fact, an inland sea. Giant prototrees inhabited the shallows of this sea, and root formations where the rooted tree did not begin by growing vertically were not unusual. Very wide roots systems and bases in the sedimentary swamps, on the order of hundreds of meters wide, were not uncommon, supporting trees up to 1000m in height.

Later on, the seas retreated, and erosion of the sedimentary sea bed began. Wide swaths of the giant forests died out, and were replaced by smaller trees more adapted to the drier environment, as in our world. However, in one region, this didn't happen.

Here, volcanic intrusions from beneath the seafloor (such as our own Devil's Tower were relatively commonplace. Over an area of roughly 200 km², these intrusions were revealed to various altitudes by erosion of the surrounding sediment. By chance, the formation of these extrusions included substantial amounts of minerals such as selenium that were very favourable to the growth of these prototrees. The root systems and broad bases of these trees would often grow to encompass these round intrusions, developing a trunk above a certain height on the "southern" (ie. dominant sunlight) side of the rock. Although single trunks are most common, double or multiple trunks are not unusual. Since these "trees" are not really trees in the modern biological sense, the method of growth and renewal is based on cannibalistic tendencies of the plant. Rather than a single specimen growing to an enormous age, young individuals attack the older main body constantly with a rapid growth, increasing the girth and height of the plant in successive layers. Thus, these "trees" are actually quite young, and largely unscarred.

The largest of these igneous intrusions was about 3km in diameter. This rock formation was eventually completely encircled by prototree growth. A number of smaller secondary trunks grow from this ring, but the primary trunk is a double trunk system facing just west of south. This particular rock formation, like many others, protruded quite far above the forest floor. At some relatively recent time (geologically speaking), the rock formation, intruded by root systems below the surface, broke off and collapsed off to one side. Fortunately, the trunks were not taken down at this time. Unfortunately, the spectacular size of the primary trunk means that without the protection and occasional support of the central rock, it will soon (relatively) collapse.

Our elves will have had to carve a gate through the encircling tree below the main trunk system, and will have to have found some way to arrest interior growth of the tree into the ring. Not only is it fortunate for them that the largest igneous intrusion developed in this unique way, but it is also serendipitous that they were there and required a home after the rock broke off, but before the central ring grew over.

It's all pseudoscience, or at the least highly speculative, but it seems plausible to me. The conditions for this seem highly unlikely; then again, stranger things have happened, generally in Australia.

Something similar to a Strangler fig, though rather than a single plant it might be many would work. Rather than a single large tree, it would be a fast growing population of trees, possibly aminable to coppicing, possibly this could be a combination of a primary 'structural' plant, with a vine like plant that grows fast and thickens to a woody, strong structure.

While nothing like this exists in nature, over time you have a central tree that dies and spreads, and strangler vines acting much like a natural lumberjack, and then dying as nutrients run out near the centre.

Due to this you wouldn't have a nice round circular trunk, but rather a interconnected series of naturally tangled living and dead wood.

Not the answer you're looking for? Browse other questions tagged reality-check biology flora or ask your own question.

21
City in a hollow tree

21
City in a hollow tree
6
City in the wake of the Yggdrasil: Engineering Considerations
9
Viability of an amalgam tree
2
How can I get a giant banyan tree with mangrove roots?
6
How can I achieve 1.5 mile (or even 300 foot) wide tree branches?
5
Reality Check: Low-Hanging Banyans
6
What could cause trees to grow large, hollow bulges about halfway up their trunks?
6
What tree type grows into the most dense forests?
5
What could explain this unique “fruit” tree?
4
What modification would make literal fire trees be able to grow?