How many plants does it take to breathe?

I'm working on a space story in which an astronaut is travelling to Neptune to validate our CurrentEarth™ corporation's findings regarding our Solar System. The setting is a moving ship similar to the Mars home base in The Martian, but I came across a bit of a boondoggle, he needs to breathe! Being the crafty astronaut he is, he's using hydroponics not only for food on the long journey, but also for his oxygen supply. Ingenious!

How many plants would it take for my astronaut to breathe while doing strenuous tasks in space?

BIOS-3, a sealed, underground compound designed to mimic a spacecraft, managed to generate oxygen for humans using algae. Its specifics are outlined in an article by Salisbury et al.:

Some of these figures are for the original setup; modifications were made to increase efficiency. Later experiments showed that "higher plants" could supply the crew with enough food to survive; they included beets, cucumbers and potatoes. In theory, to meet the full dietary and oxygen needs of one person, you would need 56 square meters of plants; to only meet the full oxygen needs and 35% of the dietary needs, you need only 13 square meters.

Gitelson & Lisovsky (2008) presented a slightly different overview, though with the same numbers. Here's a diagram of BIOS-3 from their paper: 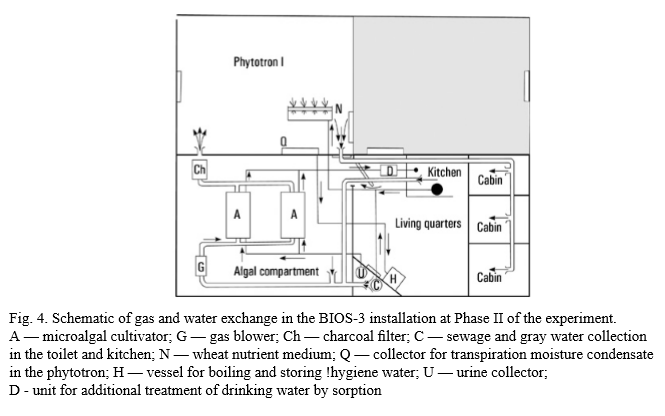 Keep in mind that technology has improved since the BIOS experiments; newer experiments, such as MELiSSA, may show greater improvements. See Nelson et al. (2009) for more information on other tests, and Johansson (2006) for an excellent comparison. There's also a great article on Science2.0.com.

Humans and animals use oxygen to metabolize our food, while plants produce oxygen while producing food. For example, the amount oxygen produced by a potato plant to produce a single potato equals the amount of oxygen the astronaut will need to metabolize that potato. Therefore, if the astronaut has plants to produce food, and they produce all the food he eats, those plants will produce enough oxygen for him to breathe.

In summary, the astronaut just need the plants to produce his food. They will produce his oxygen, too.

a mature leafy tree produces as much oxygen in a season as 10 people inhale in a year.

However a single tree is not practical because if it dies, you are f****.

The best thing is to have 3 sections in the ship that simulates day/night alternatively (because vegetation during night burn oxygen instead of producing). What you want to achieve is that at any given time you consume as much oxygen as you produce. Have many different plants of different species is another must, you never want all your plants dying because of some disease or some climatic effect of the ship.

You'll need roughly 10 square meters per section. (surface taken by a single tree, slightly rounded off) You also basically have one redundant section which can be handy if clever exploited in case of various emergencies (Sure putting more mass in orbit has high cost, but if this travel is really important you want to be sure the pilot don't die).

Not the answer you're looking for? Browse other questions tagged science-based science-fiction spaceships flora .

18
How might Plants produce flames?
4
Explosive plants
4
Plants made out of metals
27
Fireproof Plants
6
How realistic are ice plants?
10
Plants That Use Chitin in Place of Lignin
8
How much energy do plants produce?
9
Plants Without Air
4
How many generations does it take to domesticate plants?