Meta note: This is not about a dome over a city, so this is not a duplication of those questions. Instead, this is about a building that is a dome in shape.

For precise reasons unbeknownst to outsiders, China has found an impressive expanse of solid bedrock, and has decided to build a massive dome. The dome has a few requirements:

The dome doesn't have to stop every assault, just offer meaningful protection as much as can hoped to be achieved.

The facility should act as a refuge for the government to retreat to, and allow it to bring some amount of infrastructure and supplies into.

They want the center of the dome to be as large as possible an empty area that can be later repurposed as needed. It should be free of any support beams, etc.

There should be a means to provide an air-tight seal to the facility.

The government doesn't care about things like windows (who needs them?), and nor is it particularly concerned with any other issue of creature comfort. The people need to survive (for a short time, at least) when sealed in the facility but they don't need to be happy.

They want the facility constructed within 20 years. They have reached across the globe to architect firms to find the best minds to work on this project. The government discovered that the tallest buildings in the world (Burj Khalifa, Shanghai Tower, and Abraj Al Bait) cost \$1.5 billion, \$2.4 billion, and \$15 billion to make. They decided to set the budget at 10x this combined cost, \$190 billion. This will make it the single most expensive building constructed in modern times.

They feel like this budget will go a long ways since they have access to cheap labor and no egregious concerns about worker safety during construction.

Over a dinner meeting, one of the government officials sketched this design for a suggestion for the architects to look over.

How close to this dream can the Chinese government reach?

As a counterpoint to the posts by Rigop and Michael Karnerfors, building a dome does not have to be particularly expensive (certainly not hyper expensive) so long as you are clear on the parameters and what you can expect.

As the two posters pointed out, no dome, or indeed any structure build from current or foreseeable technology can provide absolute protection from modern weaponry. In the realm of "conventional" weapons, there are massive penetrators designed to pass through layers of rock, concrete and gravel to pierce deeply buried bunkers like the Fordo nuclear facility. If that isn't going to be feasible, then nuclear weapons are available and quite scalable. During the Cold War, it was speculated the USSR had a regiment of SS-18 "Satan" ICBMs fitted with a 20 megaton warhead each. The role of this regiment was to convert Cheyenne Mountain into Cheyenne lake, and reduce other command centres in the continental Untied States (Like SAC HQ in Omaha Nebraska) into deep holes.

Since brute force is usually an expensive option, there are also ways of creating shaped charges out of nuclear warheads (see Atomic Rockets for details). Fending off a slug of liquid metal moving at @ 3% of the speed of light is not going to happen in the physical realm. 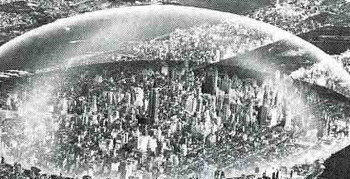 These domes can moderate the temperature inside the city, as well as eliminate the need for snow removal in the winter, or excessive rainwater flooding the streets and sewers in the summer. Other benefits are in the realm of communications (placing a node on the apex of the dome provides line of sight to everyone, for example). The cost savings in energy consumption and city services (no trees are going to knock down power lines in a storm, for example) will repay the cost of the dome over its lifetime. The long term savings in energy and other costs can be repeated over all the cities in China (or anywhere else, for that matter), providing some economic benefits for the cities and the nation.

In terms of protection, this type of dome can certainly slow the injection of outside contaminants, including radioactive fallout, chemical weapons and aerosolized bioweapons, and even deflect the overpressure and thermal energy of nuclear weapons which detonate at a distance from the dome, making ABM defences more practical and feasible.

So in terms of using a dome to protect your society, the real benefit isn't in passive defense against weapons, which isn't particularly feasible, but in eliminating costs and providing a real economic boost to the inhabitants of the city by reducing their energy consumption and costs of city services, providing more capital for them to save or invest.

The best defence can become the best weapon, for the enemy

In the olden golden days of World War II, when the enemy had no kind of precision bombing to use, this might have been a good idea.

Today, not so much. The reason is that the enemy is quite good at "threading the needle" and putting ordnance in the same spot, many times over. Not only that but the enemy has also become quite good at bashing their way through solid rock. Even if you build this thing 15 meters thick, after 3 to 5 hits in the same place, they will have punched through. Now your defence has become a liability, because suddenly it is raining down huge blocks of rock over your population. The enemy now has the ability to bury your population under 15 meters of crushed rock.

And even just assuming they punch holes in it, the enemy can now start sending quite nasty stuff down the hole, such as thermobaric weapons / fuel air explosives. Start a good fire down there and not only will that start using up oxygen and fouling up the air with toxic fumes that you cannot vent out, but the dome will start reflecting the shock-waves of those explosions and sending them back to the ground. Double trouble.

In fact, the enemy might even consider dropping a small tactical nuclear weapon down the hole because you have provided the enemy with a very nice containment. And again: reflected shock-waves. They can use a fairly small nuclear charge, maybe only a few kiloton because with the shock-waves bouncing back and forth, this will wreak utter havoc in the city.

So a dome? No, that is probably a bad idea, because once your enemy turns your defence into their weapon, you have no escape at all.

As I said in the comments: burrowing down into a mountain or the ground is much more preferable. Then you can go deep enough to not have this be a problem.

You try to bring back the old good castle in warfare. The thing is the castle is out of the game since guns are powerful enough to disintegrate them.

Today's weapon are adapt to modern war so we don't have the giant canon we used to made but if you bring back castle they will come back and what you built in 20 years will be destroyed in a week.

https://en.wikipedia.org/wiki/Schwerer_Gustav The biggest cannon ever made could pierce through 7 meters of concrete plus 1 meter of steel in one shot. How many shot will it take to take down your dome ? Unless you have a fantasy indestructible material to built it, it is a very bad idea on the military side.

This is why nobody even try to build it in the real world, I know nothing in architecture. However it is a really cool idea. Your problem is find a reason to build a useless expensive giant structure but it is impossible to make people believe it will solve all the problems... oh wait => "LETS BUILD A DOME!"

So in my opinion a project like this is possible if it is a symbole and nobody expect it to protect anyone.

Not the answer you're looking for? Browse other questions tagged reality-check architecture or ask your own question.

7
Genetically preventing a rebellion on a generation ship
9
Airship Aircraft Carrier Dimensions
8
How plausible is this form of government; where you get votes depending on the amount of income tax paid
6
What will be the consequences of opening secret-research facilities to public (e.g. Area 51)?
5
How do you keep magical creatures trapped in a closed village while allowing for expansion?
7
Catching Rainwater in a Safe and Efficient Manner?
75
How Long Could an “Eternal” Fire Last?
5
How would a private global security force receive funding?
9
How to build the Cube Prison from Cabin in the Woods?
23
Dungeons for Real: 1. The Bottomless Pit