What would night look like on a planet orbiting Sirius B?

Assume the planet's orbit around Sirius B is much closer to its parent star than we are to the sun so it still receives enough light and heat to form an Earth-like environment. What does night look like on this hypothetical planet? Would Sirius A shine brightly in the night sky like a full moon? Would there even be a night the way we think of it if Sirius A in the sky? If you were to lie back on the alien grass at night on the top of a tall hill, what would you see?

Sirius B has an eccentric orbit around A, at its closest it is about 8AU from A; at its most distant, it is 31AU. It takes about 50 years to complete an orbit.

When close to Sirius A, the main star would be as bright as the sun is on Earth (mag -27). When at its most distant, the Sirius A would have a magnitude of -25: Still too bright to look at, Far brighter than the moon. If the star was above the horizon it would be "day".

Sirius B is much less bright. From any reasonable orbit, it would appear as an intensely blue-white point of light.

The eccentric orbit is going to play havoc with the climate. There would be a 6 year "summer" as you pass close to Sirius A. 10 years of cooling, and then a long winter lasting over 20 years, before slowly warming again.

In the absence of Sirius A, and using a procedure to calculate the habitable zone puts a planet in the goldilocks zone of Sirius B at about 0.09 AU from the white dwarf. But since this planet is also going to be significantly heated by A, you should probably double that: about 0.2 AU. That is closer than Earth is to Venus, but barely enough to show a significant disc.

Now this planet has been through a lot. It's host star used to be a bright white star, somewhat more powerful than Sirius A is now. This star has passed through a red giant stage, then has disintegrated as a stellar remnant nebula, losing most of its mass. During the red giant stage, the planet would have been thoroughly baked.

To have survived the red giant phase it would have had to have been a long way from the star (So far that it's hard to place it in an orbit that is stable) And then somehow migrated to 0.2 AU.

Go there in the Celestia program, and look around. 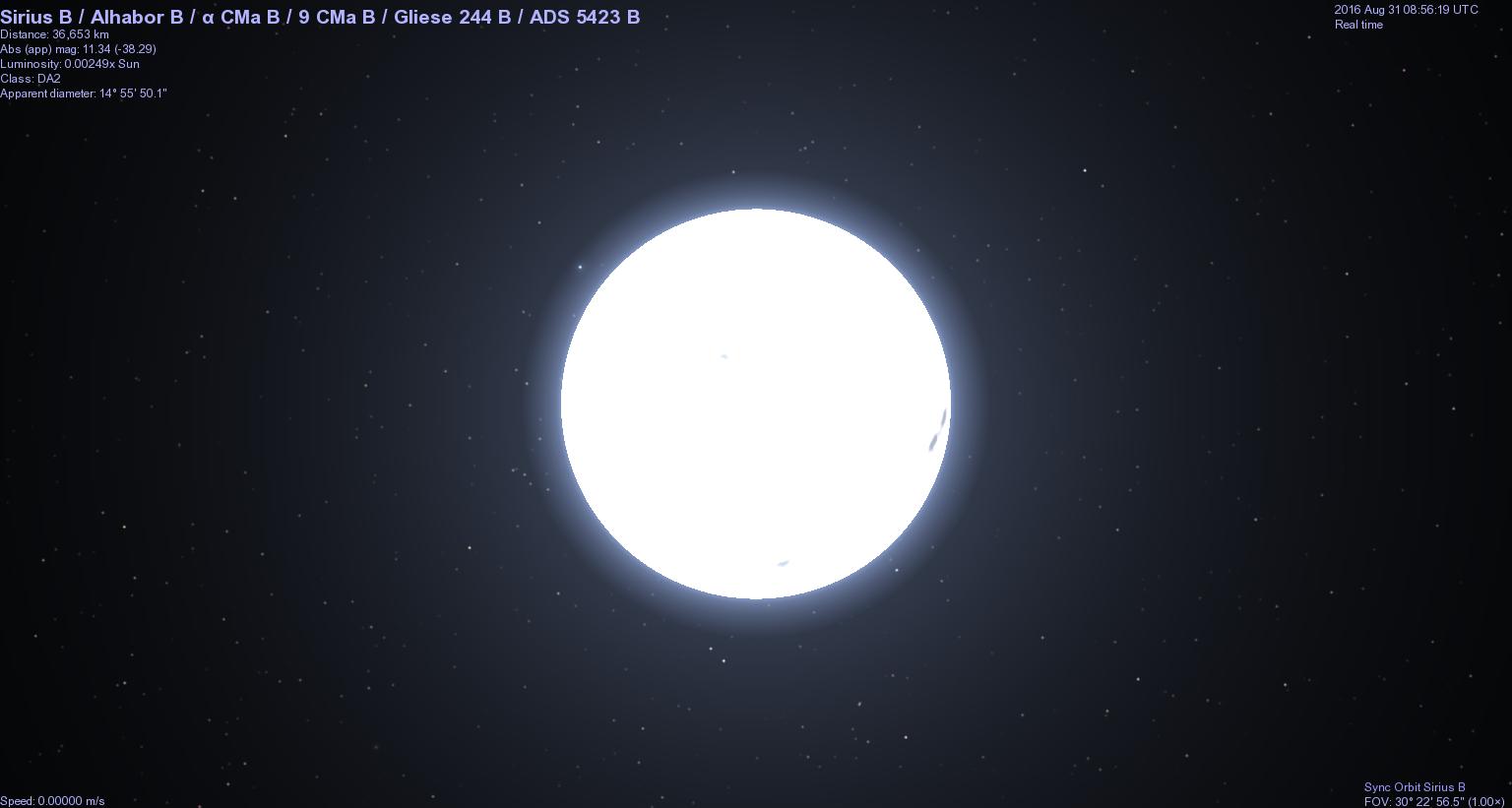 Celestia is a 3D astronomy program created by Chris Laurel. The program is based on the Hipparcos Catalogue (HIP) and allows users to travel through an extensive universe, modeled after reality, at any speed, in any direction, and at any time in history. Celestia displays and interacts with objects ranging in scale from small spacecraft to entire galaxies in three dimensions using OpenGL, from perspectives which would not be possible from a classic planetarium or other ground-based display.

The map it uses for this (HIP) is a high-precision catalogue of more than 118,200 stars. Since you are looking from a point nearby us, as such things go, I think it will be more than enough for naked-eye constellations.

If Celestia doesn’t have a planet around Sirius B in its database (since it’s not a known exoplanet) and you can’t find it in an extension and don’t care to add it yourself, just plug in a location for your POV that’s the same distance from the star that you have in mind.

The picture below is what the sky looks like from a point near Sirius B, looking at midnight up towards Sirius A. (View full image at 100% to see the stars clearly. Well not clearly; the jpeg doesn’t do it justice! Use the program directly if you want to compare the constellations to the familiar ones. You can adjust the visible brightness within the program, too.) 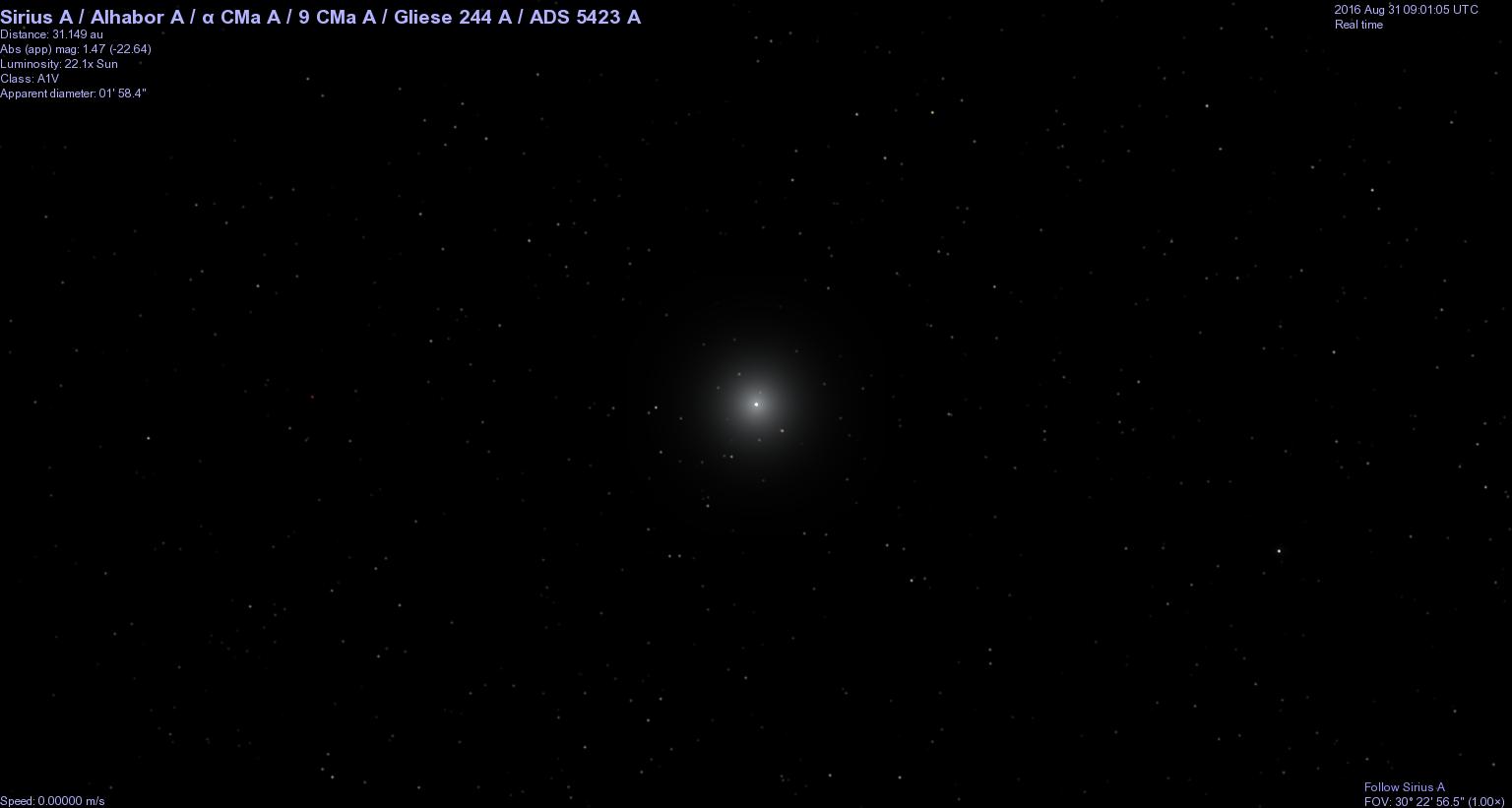 You can adjust the angle of view to show what you would see looking up from the hill at night, or what the suns look like in the day. The overlay shows that at this distance the apparent magnitude is about −22.6, making it much brighter than the moon but not as bright as the sun. It has 1/40 the light that the sun does on Earth, or (more familiar to me) about 5 photographic stops. So it will be what we consider to be well-lit for indoors. (Anybody have a more direct reference to relate the brightness?)

15
Orbiting one star in a binary system: what are the effects of the second star on the planet?
8
Moonlight and the night side of a tidally locked planet
12
How would the night sky appear from the inside of a star cluster?
12
Earth-like planet orbiting neutron star?
12
What would a planet with no moon look like?
20
What would the sky look like in the SHADOW of planetary rings?
22
Is a "long exposure"-like night sky possible?
4
Describing a planet on a comet like orbit
8
How to navigate a ringed planet at night?
2
If Earth had a smaller second moon, what would the sky look like?