Can charmspeak be scientifically explained?

Charmspeak is defined as mind control through the medium of speech - that is, the user tells the target what to do, and the target has no choice but to obey. Is there a way to explain such a phenomenon scientifically?

The author Hoffsteader's theory goes like this: Any physical device has some vibration frequency that creates resonance within its structure and will tear that device apart. See Tacoma Narrows Bridge Disaster and a lot of research into preventing such in skyscrapers. Combine this with Godel's Incompleteness Theorem which proved for any system of axioms, there will always be some statements that are true but cannot be proved such, and at higher levels of complexity will tear apart the axiomatic framework. He demonstrates that in theory at least, although the amplifier may not be sufficient quality to render the sound, there should be some vinyl record that when placed on a given record player, will cause that player to destroy itself.

So there seems likely to exist a statement that when thought about by a given mind will cause that mind to collapse, blanking out higher level thought. Think about what happens when people confront existentialism or nihilism or have a crisis of faith. Charmspeak could be the sort of thing that guides people ever closer to that precipice, and they instinctively do whatever the speaker asks in order to keep the speaker from saying the phrase that brings their whole mind to a halt.

Such a phenomenon already exists - It's called hypnosis; except it can't really be explained by science (especially because it doesn't always work), and it doesn't work the way you think it does.

At the end of the day, what you're describing simply is not possible.

Computers (well, operating systems to be more specific) can be exploited, hacked and forced to do things they are not intended to do.

With enough research of human brain "operating system", it is possible to find vulnerabilities and exploit them to take control of human person against it will.

In fact there are already enough examples of that happening. Hypnosis, manipulation through mass media, mass panic and so on. With further advancement of neurobiology and with fully digitally simulated human brain ("Blue Brain Project" for example), it would be much easier to find input sequence to do "charmspeak".

Yes, this, or a similar effect could be achieved with some work and study. It wouldn't be foolproof or 100% guaranteed, however.

There are certain frequencies which mammals react to with unease and fear. While human vocal cords cannot produce these frequencies, a little scientific boost could do the trick.

The rest would be up to psychological manipulation, and of course the all important 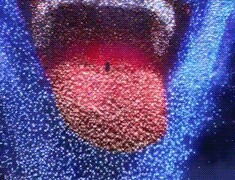 Scientist can already control the mind of animals by putting light sensible cells inside their brain, then with the use of lasers they can cause animals to do whatever they want or even feel things such as pleasure,pain,fear or happiness just by shooting a laser on their forehead.

A similar system could be used on humans but with cells sensible to sound but it will not work by saying what a person should do and they will just do it, it will work by making certain sounds and noises and the person will translate the sound into an action or feeling.

Speech alone can't really do it. You generally need some psychological or chemical factor that makes the listener want to obey, disables ability to reject outside influences or something similar.

So for "scientific charmspeak" the trick is to make that enforcing or disabling factor implicit and invisible. The details unfortunately depend on the technology available in your setting, but the base idea is that the target has been somehow altered before so that when a specific audio pattern is recognized he switches to "slave mode". Hacked cybernetic implants, nanomachines, or bioengineered microscopic lifeforms are examples that have been used in fiction.

Charmspeak in literature is arguably at least sometimes a metaphorical expression of the fear of being convinced out of your social group's belief system. In this case, the proper scientific account of charmspeak is to be provided by the logician (ideally to those of a rationalist bent, for the logician can lead us to a rationally inexorable conclusion) or the rhetorician (in actual effective practice, since people are not great at logic in general and it is therefore not an ideal tool for manipulating their ideas.)

This is the point of Friedrich Nietzsche's claim "And if you gaze too long into the abyss, the abyss also gazes into you." If you engage for long with "foreign", "alien", or "heretical" ideas, you may find appeal in some of them.

In some trivial senses it is possible— for instance Pavlov's dogs, who you could say got their mind and actions controlled by the sound of a bell ringing. Another example is subliminal messaging, although the accuracy of that method is questioned.

19
How can I explain mind control without using magic?
5
Memory manipulation as a weapon: how could it be deployed most effectively?
6
Can a brainwashed American president end the human race?
9
Mind controlling device - how to go on making one?
0
Realistic (sci-fi) ideas on how biological mind control could be possible through a virus infecting a person?
4
How could I scientifically explain a world with day/night cycle only on the equator?
6
Is telekinetic cooling plausible?
3
How could someone recognize another person as being magically mind controlled?
2
What kind of organs, anatomy or modifications are needed for my alpha creature to mind control its kin?