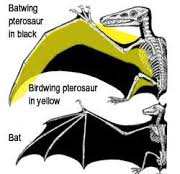 The major problem is that by the time of the K-PGe Extinction, the pterosaurs were already in decline and had been for quite some time because of the avian dinosaurs which had outcompeted them in just about all niches aside from "Giant flying thing". And big things didn't tend to do well in the extinction. So you need a lineage of small pterosaurs that can somehow deal with competition from the birds.

Make them small. Small pterosaurs survived 2 extinction events, but alas, since there were only big pterosaurs at the end of the Cretaceous, thus, they became extinct. Your pterosaurs would need to be small, as big as the pterosaurs in the Triassic. Than, take advice from the carnivores. The creodonts died out because they ate meat exclusively, but the carnivores were omnivorous at the time, thus allowing them to survive. Your species would need to eat everything that's smaller than them, or hunt in packs to bring down larger prey. At the right time, of course, they could become big.

Not the answer you're looking for? Browse other questions tagged reality-check evolution dinosaurs extinction .

12
What anti-aircraft magic adaptation would be better for dragons than flame spitting?
17
How to justify digging claws and opposable thumbs in the same being

10
How long could life survive The Night?
2
How to tour Cretaceous Period on economic class?
3
How long for a KT style event meteor to be visible from the ground level?
3
What aquatic creatures would survive a large-end mass extinction?
2
How big animals could survive on an island the size of Madagascar
31
What can we eat in the late Cretaceous?