So a man who was about to die was given a chance to evade death under the circumstances that he must travel to parallel world earth where magic exists and has only medieval level technology.

He has 3 years to prepare before his departure, the date of his death.

One of his preparations is about a powered assault armor.

With near future technology and virtually unlimited funds. He must achieve the following for the powered assault armor. 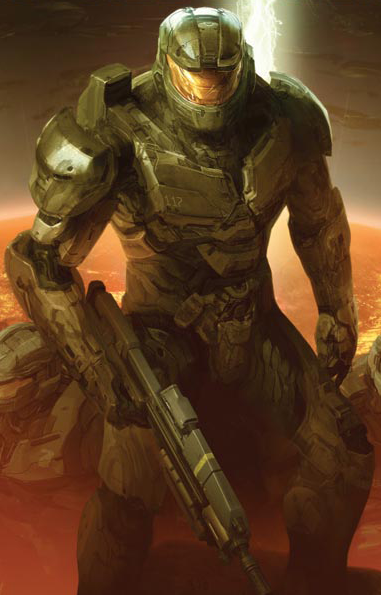 We know its impossible to get that kind of armor with the current technology, so what i want is that what could we achieved with near future technology to come at least near it.

The main goal for the armor is that it could at the very least survive an encounter against magicians who uses 5 basic elements Fire, Water, Earth, Lightning and Wind

SO is there in anyway to achieve the above specifications with current to near future technology?

What i had in mind is that the Non Newtonian fluid has multiple function such as being non newtonian to be able to resist? blunt blows, coolant and power storage to mitigate the problem of protection and power issues which can severely hamper the operation of the armor. I don't know how this can be achieved but that is one idea from my mind

If not then What kind of technology would it need to be able to achieve the specifications above realistically?

While exoskeleton technology is getting pretty advanced, and plating over an exoskeleton with armour is quite plausible (although it would be mostly composite material like kevlar with metal or ceramic strike plates covering vital points), the real issue is the power source.

Currently, battery technology simply is not viable for high density energy storage, and there are fundamental issues that seem to limit battery technology. The Chevy Volt provides an automotive example; a battery pack weighing a ton provides enough energy to drive 40 miles, but an 8 gallon fuel tank provides the chemical energy to drive for 300 miles. While GM has laid a lot of smoke, the Volt is a hybrid electric car like the Toyota Prius, and the engine does indeed drive the wheels (it is not a serial electric vehicle as GM has tried to imply).

However, a person wearing powered battle armour will be carrying a significant amount of weight with a generator set strapped to his back, and the noise of the generator and the potential danger of carrying a fuel tank has some tactical issues in a combat environment. For the foreseeable future, this is going to be an issue for using and deploying exoskeletons. Ironically, rather than Starship Troopers we may see exoskeletons like the "power loaders" in the movie Aliens, since they can be plugged into the wall to recharge at the end of the shift, much like forklifts today. 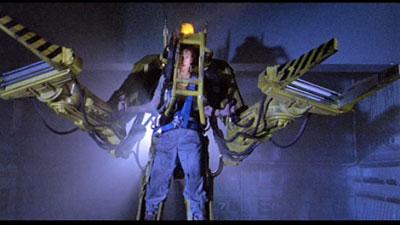 Of course, if you get into it with an enemy inside your warehouse, they will have a very bad day.

Since you are looking for something closer to the Marauder suit of Starship Troopers, or maybe the powered battle armour from Forever War, then the real issue is going to be a compact and high energy power source, and environmental protection. Using current technology and understanding of physics, the suit is going to be nuclear powered, probably using an RTG to create the compact and dense power source needed. Since the RTG is going to have to be very close to the wearer, there will also have to be some heavy duty shielding, both to protect the suit's user, but also other friendly forces nearby, not to mention the armourer and technical staff who service the suits. As an alternative, suggested in the book "The Next 100 Years" is to beam power to the suit from orbiting solar power stations, but issues such as focusing and targeting the beam on a small target like a solder without frying him, or preventing the beam from being interrupted were handwaved in the book. 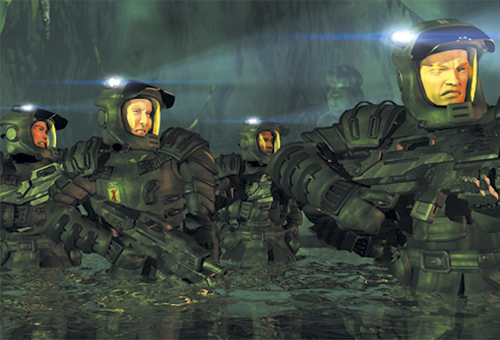 One other issue which seems to have been overlooked is the suit is essentially a spacesuit, since a human being inside needs to be protected from extremes of heat and other environmental hazards. There will need to be either some sort of heat rejection system (radiators) or a heat sink contained inside the suit which can be vented once the heat capacity is reached (a tank of frozen water would have the highest heat capacity per unit weight), but there should also be oxygen systems, systems to dispose of waste and provide some food and water while buttoned up. While spacesuit design is relatively advanced, current spacesuits require fairly massive backpacks to supply the environmental support to the astronaut. Comparable devices like hard deep divine suits are often tethered to a surface support ship to supply power and air to the diver. Either way would encumber the wearer or limit the range and flexibility of the wearer. 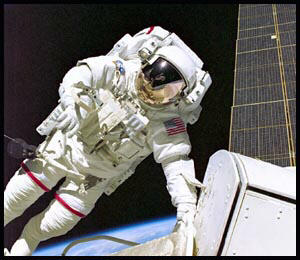 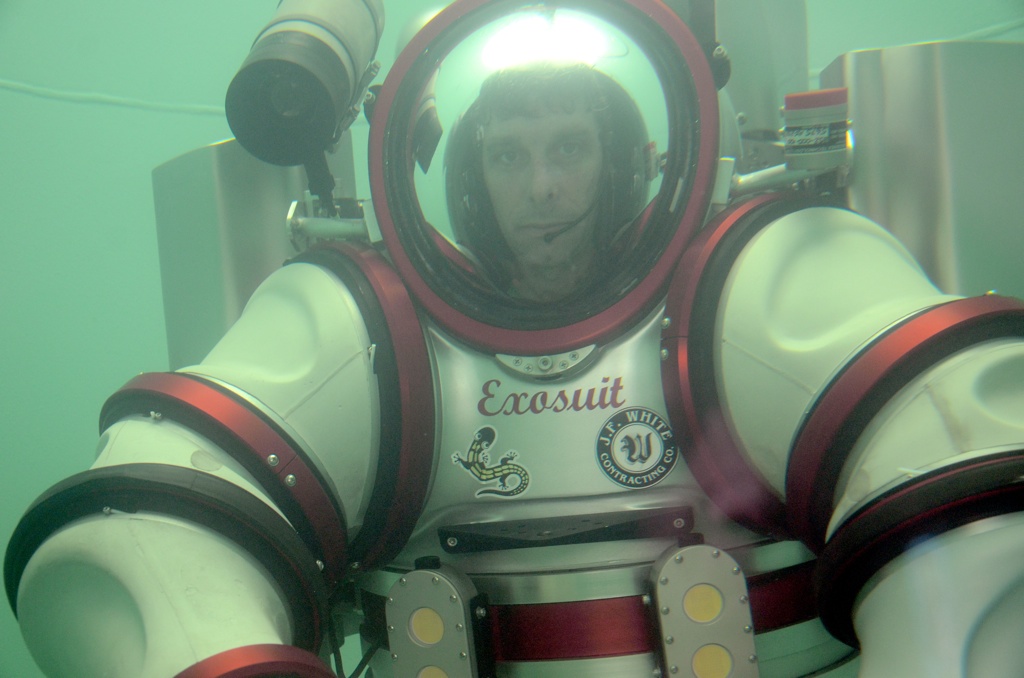 So short answer, it is marginally possible to build a suit with some of the capabilities you desire, but it is not possible to power the suit for extended periods of time, or protect the man inside without very cumbersome additions to the suit itself.

First things first, after reading some of your requirements, Halo armor also came quickly to my mind as a possibility. However when you also mentioned that it needed to be light enough for a horse to carry that quickly negated such a suggestion. Halo armor weighs in around 1000 pounds due to it being composed of large sections of solid titanium. The only reason Spartans can even move the armor is thanks to a small neural in plant on the wearers neck.

We have been making leaps and bounds in the field of armor, and even exoskeleton armor. But full body armor is still not in use because once again, there is a very large amount of weight to be considered.

Some of your specifications could be met. Firemen use entry suits which can withstand up to almost 900 Celsius for a prolonged amount of time. So a slight advancement in such a field could bring about armor which could withstand almost 1500 degrees Celsius.

We have had exoskeletons which can increase human strength by immense amounts since 2007 so the probability of a suit with charging capabilities is not unlikely at all.

I would say that such a suit however is not very probable in the near future, however 100 - 200 years down the road and we might be much closer. One of the major problems comes around to energy and weight. Materials are getting lighter and lighter, however a suit with all of the specs you need will still be very heavy and use massive amounts of energy depending on the situation. A miniature nuclear reactor could be a possible prospect.

I think it comes down to how far into the future you are willing to go, and how generous you can be with the development of such technologies.

1
Modern/Near Future Melee Armor
7
Anti-concussion brain gear?
0
Siege technology for massive migratory fleets in a fantasy world
14
Could the development of a body armour that completely stops any small arms fire make a civilization go back to medieval-style combat?
36
Is there a liquid that could protect a human inside it from impact?
7
Realistic hovering mechanism for my sci-fi drone
2
Scientific explanation for extreme fighting strength
2
Large projectiles vs heavy personal armor