What would be the most effective feet design for sustaining massive weight and also allow for the ability to climb?

The organism in question has 12 limbs, 8 of which are large and strong legs that sustain the weight and give mobility. It weighs from 200 up to 400 kilograms depending on the species.

It also has to be able climb vertical rocky walls 90° to the terrain.

I was amazed at seeing video of goats on the sheer face of a dam. Mountain goat feet are not what people expect.

The goat hoof has hard, sharp edges surrounding a soft inner area. Four hoofs are on each foot, two of which strike the ground. The two halves of a mountain goat's hoof can move independently of one another, giving a better grip while climbing. The soft, inner pad acts like a suction cup when weight is applied, providing much better traction on rocks than the hooves of deer or antelope.

For a large number of limbs, I would consider mountain goat below for standing and pushing from the ground, and reaching hooks for upper limbs that pull from above.

As for evolved vs designed, what if they were “designed” by being domesticated and bread for a purpose?

A closely-related group of animals on the planet could include smaller climbers and larger forms that use the powerful upper limbs to pull down trees. These can be bread to produce strong pack animals that climb, either because of the great variation across the gene pool of closely related species, or by cross-breeding mules for the job.

Or if they cross-breed naturally, but normally have climbing and size is separate animals, that would explain the contradictory traits.

You want to make it hard, huh? Heavy weight and ninety degree climbing? There is some question about how feasible that is in general, but it might work.

I could think it was possible of they had relatively thick limbs that were fairly flexible but capable of locking (like the "latch" that horses have that allows them to sleep while standing up). That way, they could reach up, grab or brace it, and then lock in place while dragging with the other limbs.

The ends are the hardest. I guess it depends on which terrains it will be crawling. The ends of the feed need to anchor securely. I would start with semi-prehensile claws that can dig into cracks. They would have to be relatively strong to force themselves into softer material but also enough to have 2-3 of the limbs be able to support the full weight of the creature. They would also have to have a number of claws to ensure a tight grip.

I think prehensile because a common climbing maneuver is to jam your hand or body part into a crack and expand or twist it to lock it into place and then pull up. They could do the same, but maybe specialized to "swell" into place either by bunching up the muscles or fluid sacs.

Now, the ninety degree requirement is the hardest. Very few creatures in this world frequent that type of climbing for any length of time. Most of the ones that do are very small.

I don't think this is possible for a multitude of reasons, one being how large size comes about. Animals become very large when there is not much effort involved in getting their food. Look at all the largest animals to exist, even in recent evolutionary history: whales, elephants, mega sloths, whale sharks, etc. All of these animals put very little energy into living unless necessary.

Out of all things an animal can do, other than fighting, climbing takes up some of the most energy. As a result, animals that climb don't evolve to be big. Another detail to keep in mind is that it is vastly easier to climb the less you weigh; so of two climbing animals of equal size and build but different weight, evolution will favor the lighter one.

But this is speculative biology and we can get crazy. Let's suppose that its limbs are simply half, half. 2 pairs are used for supporting the weight while on the ground. Only 2 pairs are needed to support its weight on the ground as at its largest, it only weighs 1/15 of an elephant. Spread hoof feet, a la elephant, will work best here. 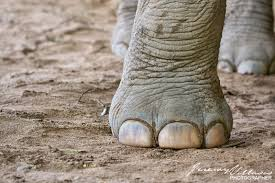 The other 4 pairs will be... weird. For one, the animals climbing limbs will need to evolve from a hoof as did the elephant foot. For two, natural climbing limbs we see on earth will not cut it here as the animal weighs more. I imagine a singular hoof that perhaps evolved a shape similar to a climbing axe. 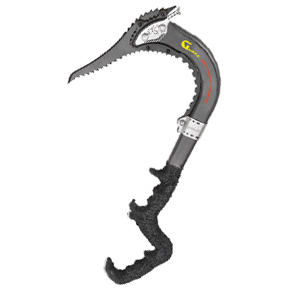 These limbs will be very powerful, perhaps even twice as much as the legs. The shape of this hoof will also allow for a good defensive tools as well as grabbing high up food or escaping prey (depending on whether it is herbivore or carnivore or both).

One good feet for the purpose must have a "pillow" right under the end of the leg bone to hold all the weight, and short and strong fingers with claws to pull him up. Other feature in his feet could be suction cups, like retractile fingers in the side of the feet, in order to solve the problem of the vertical wall.

My first post in this Stack, sorry any mistaking.

Not the answer you're looking for? Browse other questions tagged science-based creature-design aliens fauna xenobiology or ask your own question.

11
What would be the best fighting styles for a humanoid with a low center of gravity?
3
How heavy would a Naga be?
7
Muscle mass required for organisms to jump
5
What would be the ideal terrain for promoting the evolution of blade feet that sink into the ground?
4
Arachnid fingers
7
What Changes Are Needed To Make A Land Vertebrate More Than 100 Tons?
3
Hand mouths evolution
3
Flying lamias and flying angels dynamics