How to carry a spear?

I'm writing about a human character in a medieval fantasy novel, named Gaheris, who fights exclusively with a short spear. This spear is 180cm (71 inches) long and Gaheris is 190cm (75 inches) tall.

Since Gaheris travels all over the country, walks forests, goes into marshes... it would be easier for him if he could use his two hands at all times. But then, how can he carry his spear ? Probably in his back but how would it be attached ? With the spearhead up or down ? Does something like a spear-sheath exist ? And how would he "draw" his spear ?

If you think carrying a spear in the back is not possible, how would Gaheris climb up a mountain in your opinion ?

It seems that the most convenient way to transport a spear is on the back/on your shoulder. With a string tied to the upper and the lower part of the spear, you just pass your shoulder between the string and the spear and you are good to go. You just have to lean a bit to go through doors. For walking in the forest I think holding the spear with at least one hand is better to avoid to stuck it in a tree.

Or you can make a convenient cover, with two straps to use it like a backpack. But it is really less convenient if you have to use it quickly to defend yourself...

But depending on the technology used you may make it telescopic, it would be much more convenient to transport. If the weapon is the main one of your character it could be unique and customized, and a telescopic spear could be really cool.

As a HEMA practitioner:

Use it like a walking staff. Walking staves are useful, both for traveling and fighting! This one just has a pointy end. It's about the right size for a walking staff, too. (Although a little short for a quarterstaff or two-handed spear.) If the pointy end is a concern, it can be covered it in some leather, making an effective "scabbard." This runs into the problem of rendering that pointy end unavailable for immediate combat. This, of course, may negate some of the advantage in carrying such a short spear.

This scheme runs into a problem if the opposite end has a spike. This is more common with halberds, but it could happen with a spear, as using the blunt end is suggested in multiple manuals, such as Fiore de'i Liberi's "Flower of Battle", and were sometimes not so blunt. In the case of one end being very pointy with smaller but still pointy other end, the spear ought to be carried over a shoulder, placed on a cart, or placed on a horse. Let's not destroy that pointy end!

People have occasionally covered the blunt end of staves and spears with metal, which prevents the wood from splintering at that end. This increases the durability of the blunt end in battle and everyday use. Really, though, the spear shaft is fairly easy to come by; it's the head that's the valuable part. If the spear must be abandoned, save the head.

Medieval people didn't carry spears in general on a day to day basis, but if they were to use a spear on an "every day" basis they'd carry it on their horse. If for some reason they didn't have a horse they'd carry the spear in their hand and possibly use it like a staff.

The link in EngelOfChipolata's answer of a backstrap would never have been used and is a completely fictional thing that LARP and fantasy creative types came up with that is void of reality.

It may be that this character is carrying a special spear type weapon used for 1 on 1 fights which is designed differently than you average weapon. If that is what you have in mind then he might use, as suggested above a collapsible iron spear, designed much like today's collapsible weapons, but with different grips and overall worse iron. This would drop your weapon length to at least half size or smaller depending on the craftsmanship.

Just to be clear, you'd never carry this weapon on your back, but if you did you'd carry it point up, same with on your hip. The reason is while they have the tech to make something like this it was still not very reliable due to lack of science and lack of standardization. The most likely way to carry this weapon would probably be a horizontal back sheath or an upper leg sheath that is specially fitted to the blade head (point down), so that it's open, but holds it from falling down if something happens.

None of these may be what you want, but you did say fantasy, so I figured we should cover all the bases. It might help your story if the spear isn't always getting in his way, and sometimes a magical solution is better for the tale than a a real-world solution.

Bag of holding. Telekinesis. Give it to henchman to carry. Holstered in his own collar bone (see Woundhealer by Fred Saberhagen). Let it sprout wings. Make it telescoping (a la Babylon 5 ranger staff).

With a simple locking mechanism, this simple design should suffice: 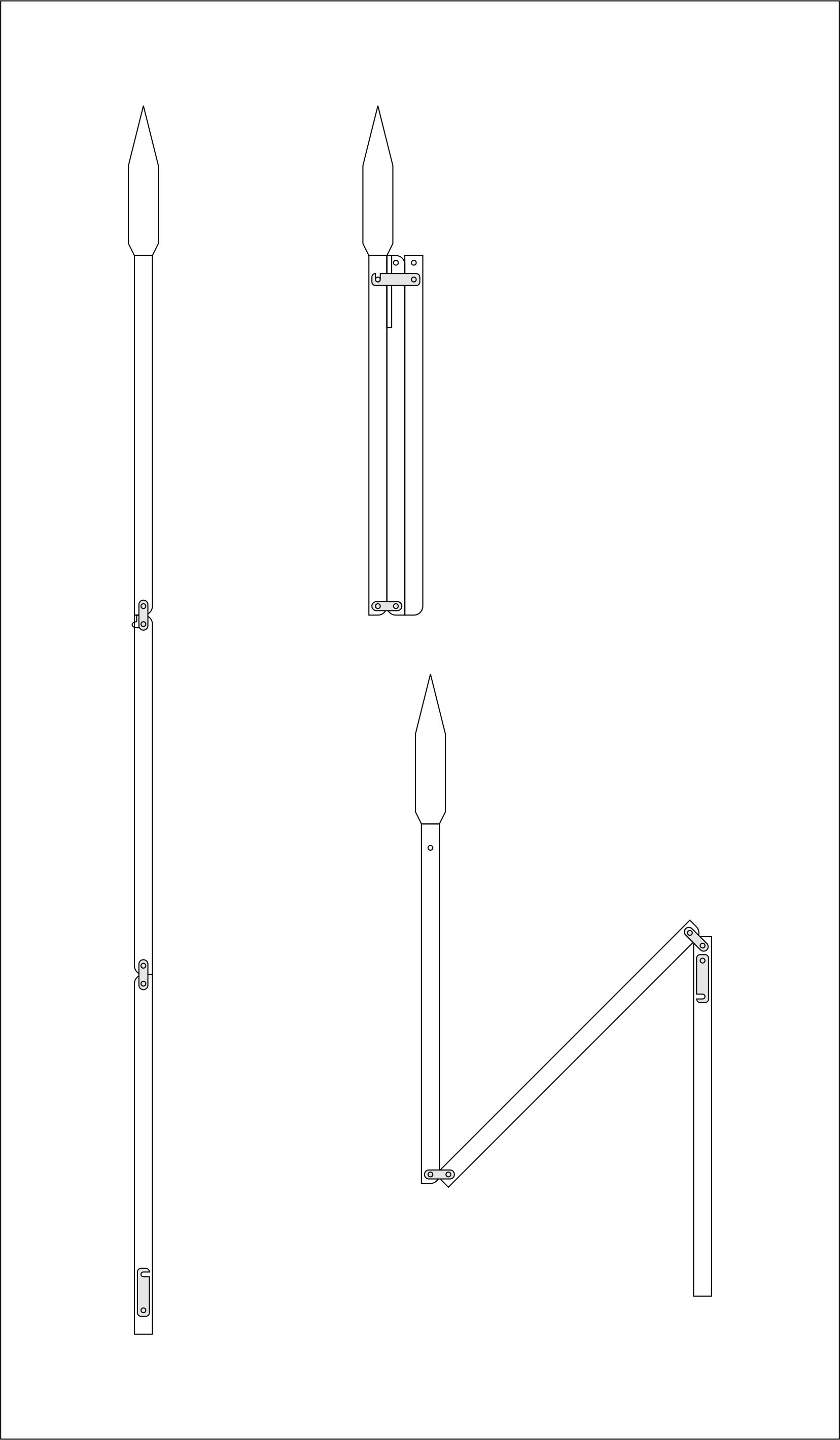 Give the Spear a Sauroter

PipperChip has the right idea about using it as a walking stick, but kind of dismisses the metal spike on some spears as a problem, when it is actually the solution. The metal spike is called a sauroter. It was invented around 400BCE at the height of the Hoplite revolution after Greek armies transitioned to mainly infantry forces. These armies often had to walk for very long distances with their spears in hand; so, the sauroter was designed to facilitate this.

While the Sauroter is often described as an "extra spear tip" this does not appear to be its primary function at all. Greeks already carried backup weapons (a xiphos or kopis) for if thier spears broke so an extra spear tip would be a silly amount of redundancy, and harder to bring to bare. Furthermore, the spike on the butt of the spear was very different than the spear head. While the spearhead was typically a light weight, thin blade of steel, the spike at the butt of the spear was much thicker, heavier, and made of bronze or brass. It was also blunted as you can plainly see in better preserved examples of them suggesting it was not meant to be used as a stabbing weapon at all.

This choice of metal and design suggests that it was instead made to be able to plant into the ground over and over again without rusting, getting stuck, or braking actually facilitating its ability to turn your spear into a better walking stick than... well a walking stick.

They also functioned as a counterweight to bring spears center of gravity farther back extending the effective range of the spear, but that has nothing to do with them being spike shaped. 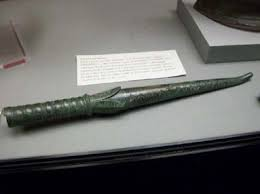 Either over your shoulder in the approved fashion, or as a walking staff if the weight and balance allows. Climbing a mountain is easier with a mountain than without one --and pre-modern types stuck to the paths anyway and did not go 'mountaineering' in the modern of technical sense. 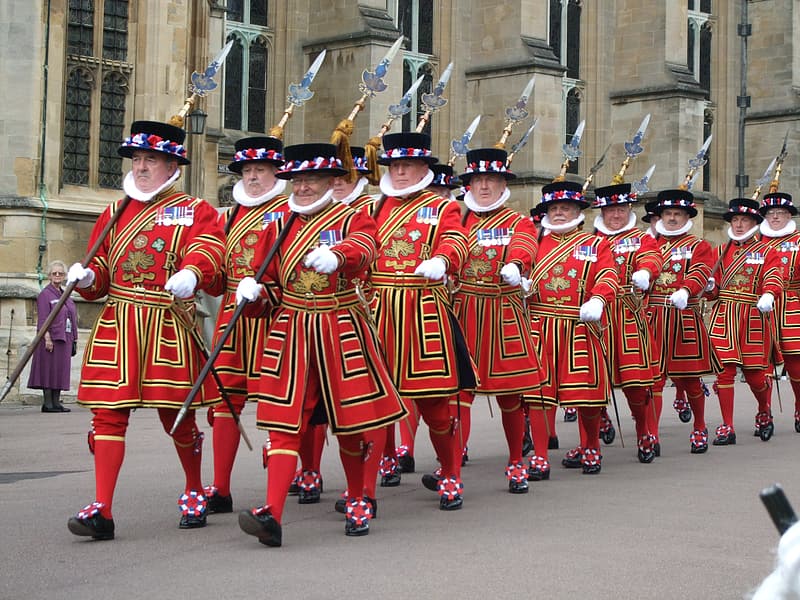 10
How would the rules for carry and use of weapons be affected by reliable stun guns?
1
What would be a viable alternative self defense ranged weapon that is not a firearm and also that are not primitive like a crossbow or a spear?
6
Fantasy Concealed Carry -- Pros and Cons of locations
40
Modern soldiers carry axes instead of combat knives. Why?
38
Why would someone carry a traditional longbow instead of compound bow?
21
How would sword design change if the aim was to cause as much immediate bleeding as possible?
1
Would it makes sense for medieval warriors to carry giant bladed weapon on weak gravity?
17
Could an army armed with only spear-like weapons be effective?
6
How practical is a spear-rapier (fencing foil) hybrid?
12
What's the safest way to carry and throw marble sized high-explosive grenades?