I am taking a page from the Anatomically Correct Series here. But instead of a living organism, I'd like to ask about a special kind of vessel.

I like ships. They are big and confortable. They have rooms for crew, for loot, for cargo and for dance parties. However, they don't usually fly high in the sky.

I like helicopters. They can hover in one place, they can take off vertically and they don't need strips of specially paved road orders of magnitude longer than them to land. However, they aren't really know for being spacious.

What I would really like to have is an aerial ship that flies by using propellers, as we see in so many different media and styles. 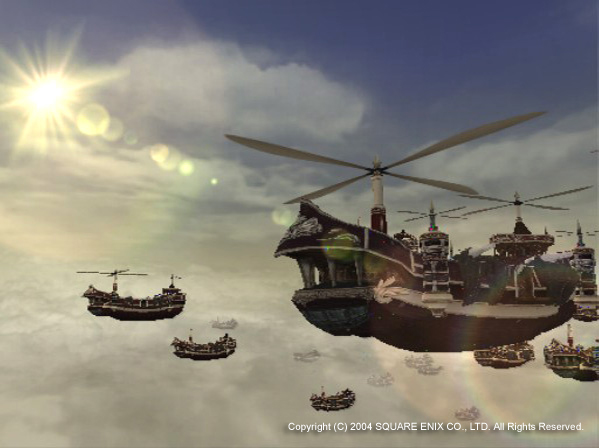 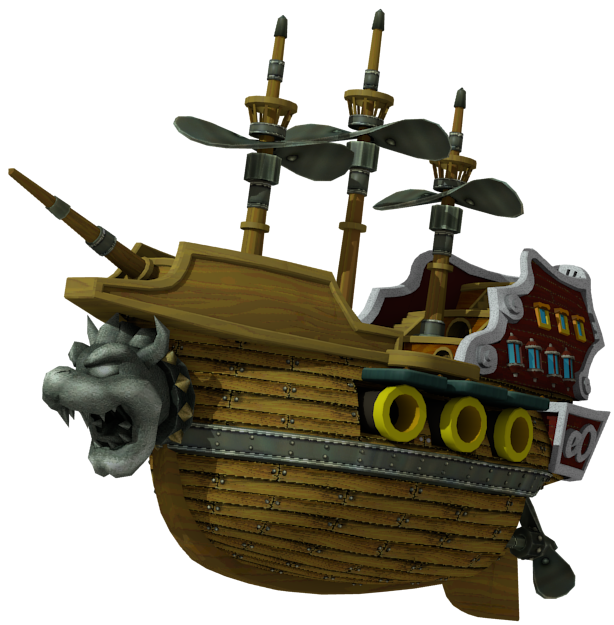 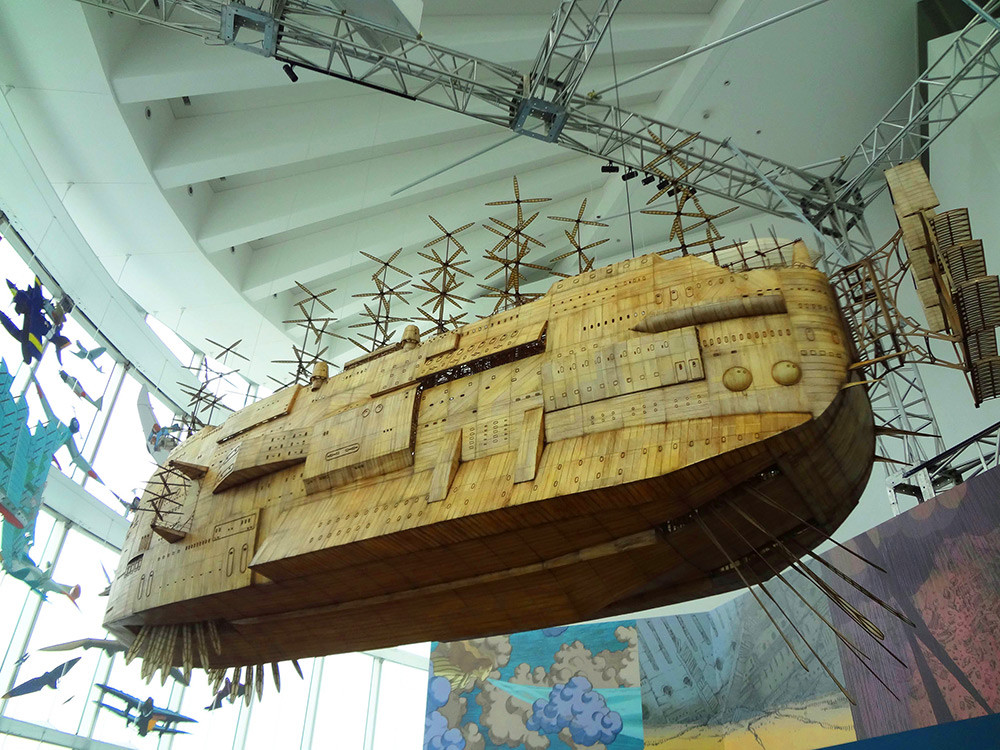 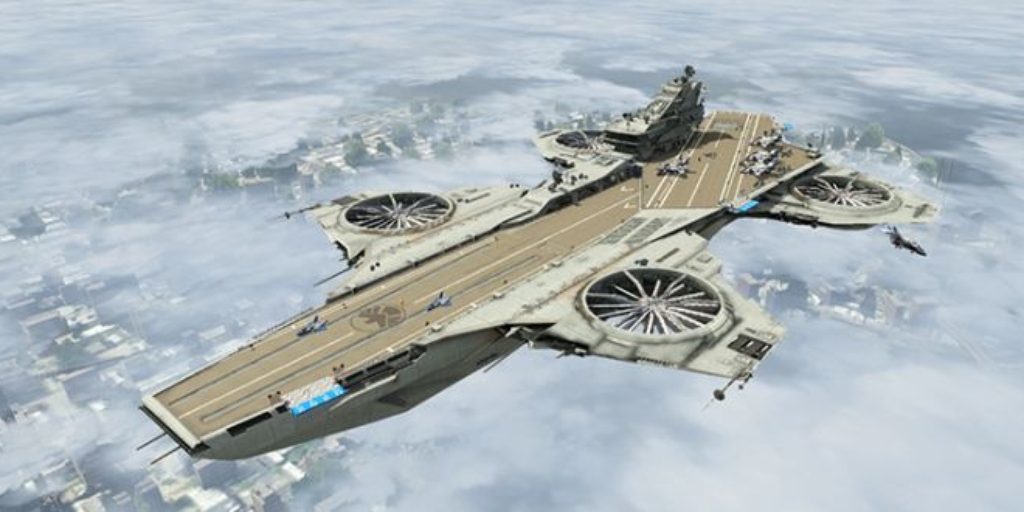 Why not a zeppelin, then? Because unlike a ship, a zeppelin will dedicate most of its precious volume for gas. I'd like to be space efficient here. Also I think that this more easily allows for an armored hull.

Also please notice that the two most closely related questions (this and this) that I could find are about airships that require lighter-than-air gases to stay afloat. As I said before, I'd like to avoid that requirement.

There are two separate problems with this:

The first is the difference between helicopters and the vessels in your pictures. The fantasy pictures show craft with lots of small rotors, largely or entirely pushing air down onto the deck of the ship. This does no good at all: the upward thrust on the rotors from pushing air downwards is mostly cancelled out by that moving air pushing down on the deck.

Helicopters, in contrast, have one or two rotors that are much bigger than the body of the helicopter so most of the air goes downwards without hitting the craft. Many helicopters are also somewhat streamlined in the vertical direction, so that the down-thrust on the body is reduced.

Your high-tech example picture doesn't have that problem, but its fans are fairly small, so they'll need to spin fast and move air downwards at high speed to develop enough thrust. This takes much more power than moving a large mass of air more slowly: helicopters do the latter because it's more power-efficient and they can thus carry enough fuel for a few hours of flight.

And fuel, or some other source of energy, is the big problem for anything that wants to fly with rotors and stay up for days at a time. Helicopters were pretty marginal with high-powered lightweight piston engines, and only became practical when turboshaft engines were developed. They're still small compared to fixed-wing aircraft, can't carry much, and have limited flight duration, because they can't carry very much fuel and burn through it quickly.

There's also a limit to how big you can build a helicopter rotor, because if you make it too large the tips are moving faster than sound, which is very noisy (which wastes power) and very bad for efficiency.

So if you want to build a very large helicopter - which is what a ship-sized rotorcraft would be - you have to have lots of rotors on outriggers, like this Mil V-12, only more so. This isn't absolutely impossible, but fixed-wing aircraft have been far more effective so far, and nobody has had a motive to build a super-giant helicopter.

Most of the reasons why it is hard are basic physics and the properties of air, rather than a lack of technology. A magical power source that doesn't need fuel would solve flight duration problems - but would also work for fixed-wing aircraft.

These guys seem to have a solution (pdf).

The present study aimed at assessing a novel annular-ducted fan lift system for VTOL aircraft through computational fluid dynamics (CFD) simulations. The power and lift efficiency of the lift fan system in hover mode, the lift and drag in transition mode, the drag and flight speed of the aircraft in cruise mode and the pneumatic coupling of the tip turbine and jet exhaust were studied. The results show that the annular-ducted fan lift system can have higher lift efficiency compared to the rotor of the Apache helicopter; the smooth transition from vertical takeoff to cruise flight needs some extra forward thrust to overcome a low peak of drag; the aircraft with the lift fan system enclosed during cruise flight theoretically may fly faster than helicopters and tiltrotors based on aerodynamic drag prediction, due to the elimination of rotor drag and compressibility effects on the rotor blade tips; and pneumatic coupling of the tip turbine and jet exhaust of a 300 m/s velocity can provide enough moment to spin the lift fan. The CFD results provide insight for future experimental study of the annular-ducted lift fan VTOL aircraft.

Unfortunately (at the time the paper went to press) it's still entirely theoretical, nobody has built one to test.

Not quite an answer (I don't really know if flying boats could be done or not based on current technology), but I felt like explaining a bit of the simple physics as to why such a thing would be difficult, and it didn't fit in the comment box so I put it here.

For the airship to be able to hover in midair, it needs to have no net force acting upon it, meaning that the downwards force of gravity has to equal the upwards force produced by the rotors.

The downwards force on the ship is the ship's total mass multiplied by gravity (on earth, 9.8 m/s/s). For your ship to be able to hover, that force has to be matched by the mass of output air multiplied by the speed of that output air "caught" by the rotors.

To explain that a bit better, let's say that you have a 100 kg airship at sea level. (Amounting to about 1000 newtons of force due to gravity) To be able to lift off, you need to be able to match that 1000. That could be 100kg of air (about 81 cubic meters) moving down at 10 meters/second, 50kg at 20m/s, and so on. As your flying thing's mass gets bigger, the rotors need to output more power (and thus need more power fed into their rotation).

While rotors work for helicopters, you can't necessarily simply scale it up to flying boats; without getting into the details (mainly because I'm not qualified to explain them), I will say that gas/fluid dynamics will start to work against you if you try to move too much air too quickly, and your rotors will fail if you spin them too fast.

In case it helps, such an idea would be more practical (though still less so than airplanes) on a planet with less gravity and/or a denser atmosphere.

Not the answer you're looking for? Browse other questions tagged reality-check vehicles flying-machines or ask your own question.

-1
Pirates, IN THE SKY?
14
Realistic Airships
9
Airships without huge balloons/gas bags that can still “float” in air, using minimal or no energy
6
Airship Aircraft Carrier Dimensions