Could the Aztecs have domesticated the Collared Peccary

The Collared Peccary is not the name of the greatest man stripper under the sun, but is a species of mammal in the family Tayassuidae found in North, Central, and South America. They are commonly referred to as Javelina, although these terms are also used to describe other species in the family. The species is also known as the musk hog.

Although somewhat related to the pigs and frequently referred to as one, this species and the other peccaries are no longer classified in the pig family, Suidae. 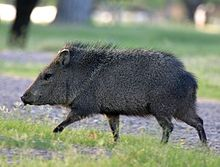 Now, theoretically, if the Aztecs had domesticated these animals, the history of the Spanish conquest may have ended differently and as CGP Grey explained in one of his videos, just because a species looks like another, the internal behavior affect whether or not ancient people could domesticate them.

Horse vs Zebra is his example, but does pig vs Peccary fall into this as well?

Could the Aztecs have domesticated this pig-like animal? If they could, when is the earliest they could have?

Domestication can happen very quickly, given the correct environment. We can take a look at the domestication of pigs (which are related but not in the same family), dogs, and foxes.

In the Russian Fox experiment it only took a scant 25 years to domesticate them as pets. But first, there had to be individuals within the population which exhibited the "tame" traits that were needed.

Zebras and horses aren't an apt analogy simply because it takes longer for a horse or zebra to mature and they don't have litters.

With dogs, pigs, and foxes sexual maturity comes relatively early, and they have litters. This means a larger population to select from, much, much more quickly than something like a horse or zebra. Horses were an easier target than zebras, so they were domesticated.

Take a look at this article on pig domestication, which outlines some of the selection and the fact that they bred with wild populations quite often. The same thing happened with dogs, which is one of the reasons why they can reproduce and have viable offspring with wolves.

My answer is simple: any darn time you please, but it will be more difficult because they only have litters of 1-3, which is not very much compared to wild hogs (average of 4-6, up to 12). Of course, wild hogs may have the characteristic of higher litter yields because they interbred so frequently with tame pigs, which were more fecund (as they were selected for the trait by breeding) and later, natural selection also favored this trait. It's difficult to know what the litter yields were prior to our domestication of them.

Domestication will change their characteristics. Not just in behavior, but also size, distribution of fat and overall appearance. You've got to keep in mind WHY they are being domesticated to decide what the changes will be.

As far as I know, no one has tried to domesticate the collared peccary, so I don't know if it's possible, however, it is not beyond the pale, and could likely be done in just 40-50 years, which is an evolutionary eye-blink. As long as there are places and a society that can support it, this would not be as difficult as you may think.

Not the answer you're looking for? Browse other questions tagged culture geography fauna domestication tribes .