Atmospheric pressure on a giant mountain

I have this dnd campaign set in a world where the only continent is a giant mountain with a mesa on top. I've made it "big enough for the top to be as large as Europe", but never went into details with my players. I was thinking, is there a way I could solve the problem posed by the atmospheric pressure changing dramatically as you go higher and higher on the mountain? Is it the only way to say "because magic world"?

Turn the problem around, or ignore it

No there is no problem that the air gets thinner as you go up the mountain, because if everyone lived there and evolved there, then those are the conditions they have been adapted to.

There might be a slight problem in going down the mountain though where the air pressure increases. Ordinary air can become toxic under the wrong circumstances when it comes to pressures.

But in any case, unless this aspect of physics is important to your world I would say: ignore it all together. Just assume that the atmosphere is right for humanoids to survive both being at the mesa and being at sea level, and that that the evolution of humanoids and mammals and whatnot is adapted to all these atmospheric conditions. Only consider this if it is important to your world, your storytelling and the game-play. Otherwise just do some hand-waving and say "This does not affect them, because the Game-Master says so".

If you want to attempt to explain it:

Or a force field, or a magnetic field so strong it can (Warning! Incorrect science!) pull air molecules towards the mountain. Perhaps not...

Have a moon which is SOOOO big that it pulls the atmosphere into an egg-shaped shell around the world. This requires the moon to be geostationary (always above the same point) and to coincidentally always float above said mountain for some reason or another. (Let's not go into what would happen to all the water on the planet.)

The world might not be a planet! What if it is a big hollow sphere with the sun floating in the middle? Maybe the centre of gravity for the earth is off-centre due to one side of the sphere being really thick and heavy (there being a continent-sized mountain on it)? In this case the atmosphere would collect around the mountain and be thinner around other parts. Problem: no atmosphere on the other side.

Maybe there is a moon or something that is a source of anti-gravity, pushing the atmosphere (by coincidence, of course) away? The result: Thin atmosphere on one side of the planet and think atmosphere on the other.

Let me just draw a picture for this one: 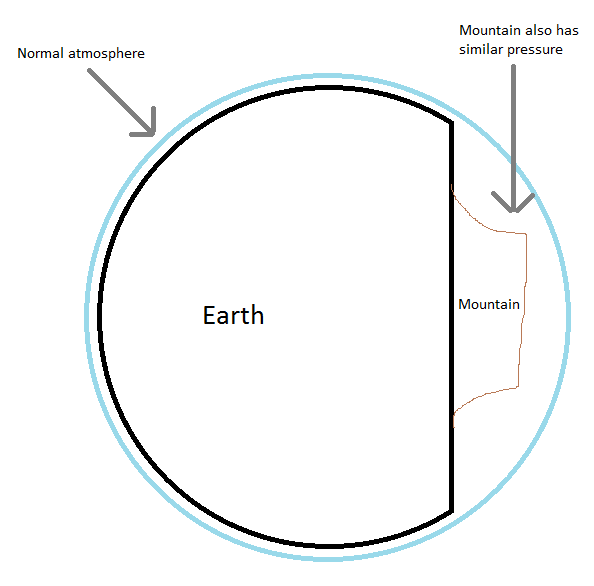 Problem here is you're going to have a big ocean acting like a moat which surrounds your awesome mountain... Still, its plausible if not easy to explain.

The explanation for anything which cannot be explained.

If the mountain is small enough, this can be solved by climbing slowly, in order to trigger acclimatization to altitude: after few days, the human body can function normally in hight altitude.

Additional, human in this world could be stronger than human in our world, allowing quicker adaptation or higher maximal altitude.

Short answer : Or your mesa is empty from all sort of life (except some micro organism) and if your crew wants to go up there they will need to be well prepared. Or your mesa is populated but there must be some construction (or magical device) that allows life up there (e.g. something like domes over cities and tunnel that links them).

I think the reason you care about low atmospheric pressure in high altitude is because you want your mesa to be populated right ? So there are several consequences to high altitude that are not really suitable for life.

To allow life up there you need to solve all of this problems. Some people, animals or plants are fitted to live in high altitude (e.g high hematocrit level). But in really high mountain live is almost impossible (except maybe some micro organisms). I think a good solution to solve them all at once is to inspire from planet exploration/colonization, the problems are pretty much the same. So I would suggest a big dome (glass, energetic, magic, it's up to you) that protects cities/towns from radiation by filtrating the light, and with an inside atmosphere constituted with the outdoor air, compressed and heated. The connections between the towns could be made by tunnels or by well paid people that have suits to go outside.

Another solution could be to replaces those domes by (natural ?) hermetic caves.

You did not mention how tall the mountain is, but if the mesa is significantly wider than it is tall, there are some factors that could make things more feasible.

First, something that large could actually offset the center gravity of the planet. As air will fall towards that new center of gravity it should help a bit, with the odd side effect of the air being a bit thinner on the other side of the world.

Second, remember that planetary gravity always pulls planets into a roughly spherical shape. That's part of the definition of a planet, that it has enough gravity to do so. Rock will bend under many miles of its own weight. It is likely that if such a geological feature were created, it would quickly settle into a different shape. At the edges it might appear only to be a raised mesa, but the outskirts would have actually been pushed lower, possibly well below sea level. Then while the edges of the mesa might be raised, the center would inevitably be pulled down. So as you travel inward from the edge your altitude is gradually lowered, even if it's too gradual to discern visually.

If however you want the mountain to be hundreds of kilometers tall, and of consistent altitude on the mesa, I think the only other feasible solution is that the planet, as Aric Fowler suggested, has much more atmosphere than earth. Consider Venus for some inspiration in this case. At the surface the pressure is 92 times Earth's atmospheres and the temperature is a broiling 462°C, but 50 km up the atmosphere is about the same pressure as Earth's and the temperature is 75°C.