Using physics - How can a character fly

I am writing a story in which the characters have some power over the physical world - literally able to transform their knowledge of physics into powers. I am trying to determine a good way for them to fly. Literally anything is available to them that has some kind of physical law attached to it.

My current plan is just to say that they can choose to cancel out gravity, but I realize it means they would just start floating, not necessary moving in any particular direction. If they change the air pressure around themselves, then they'll have to do all sorts of odd things in order to not pop their eardrums and whatnot. If they create explosions by concentrating oxygen and spiking the temperature, then they're going to die from being exploded (hah).

Edit: I'd like to say that I really appreciate everyone's input on this question and I hope it helps other people playing with such a world. I accepted the answer that worked best for me, but there's still plenty of great answers in here! Please upvote everyone, they deserve it.

$m_2$ does need to be another object, the closer and larger the better. However, if in one direction (i.e. down), $G$ is reduced to $0$ or less, this negates gravity's usual downward pull, and may provide a localised upward thrust. $G$ could also be increased in the direction of desired travel, so the character could be both pushed away from the earth and pulled toward it. The secret of this is the differential between $G$ in different directions relative to the character.

However, other objects in space could also be used - just increase $G$ enough in the appropriate direction, though that might cause other problems if it was increased too much...

...The ability to manipulate $G$ in a localised way could also be an incredibly powerful and dangerous weapon - imagine that pretty much anything could be shot off into space, or a miniature/quantum black hole could be created from any convenient mass. Resetting $G$ to its usual value after having created a tiny black hole would mean that the black hole would probably then promptly evaporate, in an explosion equivalent to the total conversion of the mass involved to energy - think megatons to gigatons of explosive power - or more.

Another, related idea occurred to me:

If one of these physics-bending characters carried an object of significant mass, they could make its mass negative, allowing it it be used in a diametrical drive.

In this answer, I discussed a "pufferpolyp" - essentially, a (fictional) creature$^1$ that can fill itself with a lighter gas and thus float up through the atmosphere. I think this could work here. Here's what you do:

You then have the issue of moving forward, backward, or to the side - after all, you can rise here, but you can't go anywhere! So let's say that when you expel the unwanted gas, you can direct the flow in nearly any direction, propelling you in the opposite direction. Need more propellant? Just take in some of the outside air, undergo electrolysis, and fly higher and farther!

$^1$ It's a figment of my imagination, by the way. Just in case anyone was thinking of buying one, which would seem to be a bad idea due to their tendency to float away. Get a good leash.

An old Soviet-era sci-fi had a flying protagonist who could directly control the direction of Brownian motion in his body. Instead of all his molecules moving randomly and having a net force of zero, he was bio-engineered to be able to introduce a bias so that the Brownian motion in the molecules of all his cells did have a non-zero vector sum.

The novel is called Ariel. However, I don't know if any English translations exist.

If they have finesse of these things, then cancelling gravity in one direction and increasing it in another could work, it would be more like falling horizontally. By strengthening and weakening the forces could allow for speeding up and slowing down.

"When I cancel gravity, I can't control which way I float."

First make a costume with plenty of fabric that you can use as a control surface. This may be an ankle-length shirt, as worn by John Darling of Peter Pan or the squeaky-voiced Seville kids in 1980s Alvin and the Chipmunks. Or it may be a cape, as worn by Mario of Super Mario World. Or it may be a dress with a full skirt, as worn by Peach of Super Mario Bros. 2. If you're not worried about fitting in, it could even be a full-on flying squirrel costume, as the technique you're about to learn is derived from gliding.

Then take a running leap, and as you push off from the ground, cancel gravity. In some settings this may involve various forms of technobabble; in others you need only cover yourself with a form of dust and think happy thoughts.

While you're in the air, move the control surfaces with your arms and legs to control your trajectory. Eventually you will stall. Temporarily allow gravity to work again, dive until you've regained speed, pull back into a climb, and cancel gravity again.

We are left with:

Conclusion: The animal is absolutely ridiculous, assuming that all my units were proper. The smallest number here is the $28.4 \text{ m}$ one, which would weigh $69047 \text{ kg}$.

Deep psychological hypnosis. A study on metaphysics and superhuman capabilities was conducted in Germany during both World War One and Two in which hypnotism and subliminal suggestion were used to recreate a 'virtual' environment so invocating suggestive response in human subjects.

Top secret experimentation did lead to specific technologies common in the marketplace today. Such 'benchmarks' may be used as marketing devices for further psychological assessment. Additional capabilities in human conditioning may be attributed to geographical location, dietary restriction, selectivity and ethnic purification; respectfully.

Other psychological drivetrains may entail an agent provocateur relationship between a host and subject in which routine examinations help build the subjects 'skill' according to the agent-agency protocol. The subject may or may not be concious during the sessions, but depending upon the extensibility of the research the virtual reality will be quite realistic with minimum degree of negative deviation.

A newer question on magic & conservation laws reminded me of this question.

What if the super AI was like Maxwell's Demon? It can cause improbable things to happen, and specifially reverse anything that happens easily. A minute expendature of normal energy and knowledge allows reversing of entropy in our physical world at the expense of having to dissapate the information entropy somewhere else or consume large amounts of power.

Unlimited hero with limits imposed: if he doesn't get back to home base in time (to discharge the divice with its special dock) then it, he, and everything around within a few feet will catastrophiclly give up energy, freezing to liquid helium temperatures.

In the Jumper series of novels(I think I was reading Exo; something like that), it was pointed out that teleporting to different latitudes etc. Required a change in momentum as well as position. She figured out how to jump in-place while adding momentum. I was thinking "I guess that's how Superman does it."

If you're making it a point to be physical for teaching and illustration (like the early stories by Robert L Forward) you need to follow conservation laws. If some other thing took the opposite momentum, and a non-instantaneous energy-carrying field linked the two, that could be interesting.

A way to have a seemingly reactionless drive would be a dark matter rocket. Particles in the air can be converted to dark matter through supersymmetry laws, liberating energy by choosing an unbalanced reaction, and having all the produced particles fly off in one direction.

But what are the boundaries of the rules? By using physics, what can be done (that doesn't work in the real world) and what can't? What's the unifying principle? The story needs a succinct super rule that the audience can grasp and understand what is allowed or not.

If it's a matter of a manipulation of rules of physics, how about having someone with the ability to stretch out their arms and use material of some sort (or if you'd like to be somewhat disturbing, their arms themselves) to generate a 'Magnus Effect'[1]?

A sufficiently powerful electromagnetic force would do the trick, such as magnetic levitation.

All you'd then need to do is alter the strength of the magnetic field in the direction you intend to travel.

Make use of the butterfly effect.

A butterfly flapping its wings in one place can cause a tornado in another. If you could harness this then, for very little effort on your part you could be propelled around by your own personal hurricane.

Maybe you would have small wings on your heels (like the god Mercury) but instead of flapping them to provide lift, you use them to cause a boomerang butterfly effect. There would be a time delay but you could learn to control this with experience.

In chaos theory, the butterfly effect is the sensitive dependence on initial conditions in which a small change in one state of a deterministic nonlinear system can result in large differences in a later state.

If you are willing to change laws of physics, the answer is quite obvious.

Negate the law that says every force has an equal opposite force. No the character can pull themselves up by the bootstraps or something similar. They are actual a couple ways this could be realized, from tag teaming to magnetism. I provide a gallery of different demonstrations of the principle. 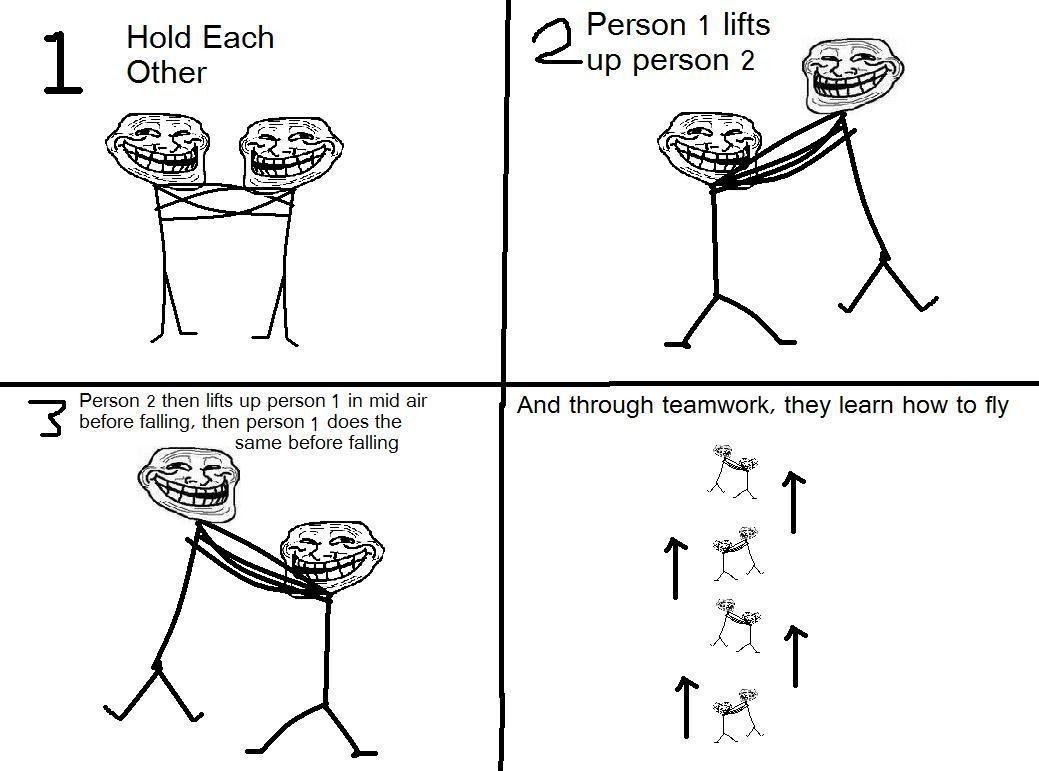 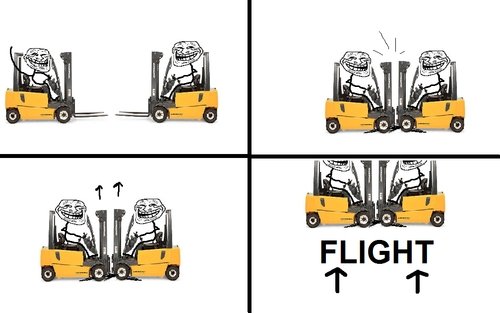 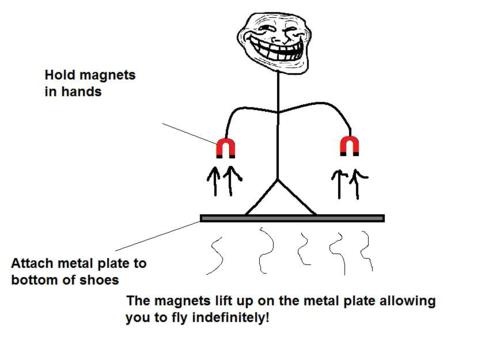 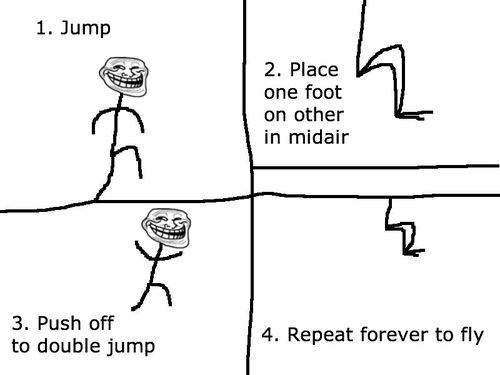 Why not manipulate gravity so that it pulls in a different direction, so that you could fall in the direction you want to go?

Your current version sounds a lot like a basic form of what Brandon Sanderson uses in Stormlight Archives - cancel out gravity. What makes it flying is that they can also let gravity act upon them in any custom direction. So the flying becomes a bit of falling with style.

My personal preference would be a combination - cancel gravity and then use wind to steer yourself where you want to go. If you're weightless (NOT massless), you will accelerate a bit slow (because of your mass relative to the air), but you'll be blown away by any wind.

Not the answer you're looking for? Browse other questions tagged technology physics magic flight or ask your own question.

43
Is a jet dragon possible?
21
Life on a planet with multiple gas layers
6
High-Altitude Life?

18
Making the Enterprise Fly
7
What could be the physics behind witches flying on broomsticks?
8
How would it be possible to fly with Talaria (winged sandals)?
28
How could a lightning magic user fly?
3
Could an aircraft fly or hover using only jets of compressed air?
5
Can an Io-like world exist in such conditions to allow this character to fly?
2
How would a horse-like animal fly using artificially engineered wings?
9
Can a "knockout bird" fly?