So Murlocs. I'm referencing Murlocs from World of Warcraft since I never actually found any other novels or games that have them. 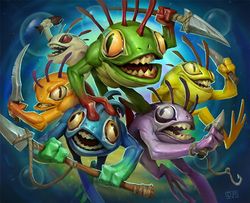 Murlocs are basically carnivorous frog so you can start from here.

Initially, you have frogs in an environment with mixed water and land but with little amount of bugs, so classical frog hunting method of capturing bugs with theirs tongues and switch to hunting like small predator and evolve to a jaw with small teeth.

Next, murlocs begin to need to hunt bigger prey due to a lack of small comestible prey. In order to be able to kill taller animals, murlocs are forced to hunt in group, thus developing communications abilities and improved intelligence.

Over time, murlocs grow bigger due to better feeding, this increase in size allow a better brain, that lead to increased intelligence and therefore better hunting tactics that allow to kill bigger prey improving the available food, continuing the cycle.

Eventually, murlocs reach the limit in size of 3-6feet due to the available prey.

Not the answer you're looking for? Browse other questions tagged reality-check evolution creature-design mythical-creatures sea-creatures .