What would be genetic and social result of artificial selection of people who would survive? [closed]

There is a standard, generic incoming doom.

The general population is already roughly aware how nasty the situation is. (with both people overreacting and underestimating the problem)

There is an Organization that can save approximately 1 million people (with soft SF means, sorry about that ;) ). It is effectively flooded with prospective applicants who want to be taken.

Only select women… and sperm.

Women work better together and will be far less violent. Sperm can be frozen and transported easily. Men would consume resources without providing a useful womb (assuming there are no artificial wombs). The women can easily be trained to fill all science and technical positions. You can't afford to have any dead weight.

With frozen sperm you can also bypass all inbreeding issues for generations to come, maybe indefinitely. They can easily select for sex while they screen for genetic problems. All pregnancies will be artificially inseminated anyway. The oldest verified mother was nearly 67, so there is no reason to worry about age. Science and hormones may be able to extend that even more.

You certainly wouldn't allow a couple to have TWO children with the same zygote parents, and you wouldn't leave such decisions up to random Friday night dates and mood lighting. If your entire population is women, they could pair off into couples (or triples) to co-parent. Some women might actually enjoy pregnancy while others would delay or abstain, but with an all female crew you've doubled your capabilities for pregnancies.

If you also bring frozen eggs, the scientists and engineers are not necessarily reusing their own DNA. The 1st generation could have maximum diversity with every individual being no genetic relation to any other – although you would still screen for genetic disorders so I'm not sure how useful this would be (maybe very useful if you suspect future generations will not have the same invitro technology).

They should not create any male births until the crisis has safely passed (when they reach a new planet, or however your ark works). Men carry less genetic information – most people are surprised by how much less – and the whole point of a breeding program is to be able to safely select for recessive genes. Y chromosomes would compromise that. 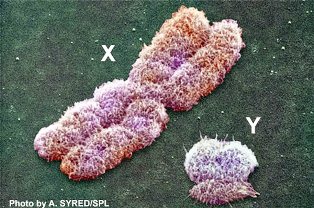 People actually might not feel as bad about being left behind if they believed they would live on in some way, by contributing to a future human colony. I would hard sell the sperm/egg bank idea upfront to your general population, and tell everyone they are accepted. It would be up to future generations to decide if and when to use the bank anyway (and they might actually use it for gene splicing spare parts).

There are a lot of unknowns here, since we don't really have an understanding of the Organizations goals.

Firstly, what sort of apocalypse is being mitigated here? If there is a world destroying cataclysm which will strip away the technological infrastructure of the world, then the survival traits will be built around strength, endurance, agility and hand-eye coordination in order to survive long term as hunter-gatherers. Your best bet in that case might be to sift through the pool of Olympic level athletes and SoF soldiers.

OTOH, if there is some sort of soft apocalypse where organic life is seriously impacted but there is still functioning infrastructure, then you might want to select for intelligence, cognitive ability, problem solving, memory and other aspects that would allow the survivors to quickly control, maintain and repurpose machinery and equipment.

Other issues that need to be addressed are the long term goals of the organization? Do they intend to repopulate the world as quickly as possible? Then they may have to select for youth, reproductive fitness and possibly mental attitudes which would allow for polygamy (since most humans respond best to monogamy). Breaking down long held biological and cultural taboos should also be looked at very carefully in case undesirable second and third order effects become manifest (one taboo which might have to be broken if rapid repopulation is a requirement might be incest).

Trying to use this for Eugenics is going to be fraught with problems as well; there is a tendency called reversion to the mean where children of exceptional parents (intelligence, height, beauty or other inherited attributes) tend to resemble the genera population rather than being even taller, more intelligent etc. You are not going to create a society of supermen, and will probably not even breed out diseases to a large extent either.

Seriously trying to use Eugenics to create a different sort of society (which is what is being attempted here) is going to run into the much larger problem of trying to move a massive object with a toothpick. Human evolution has taken place over between 2 and 5 million years (depending on where you want too assign your start point), and much of human biology is underlain by this fact. We also are not very clear even on which genes do what, how the genes are expressed and what so called "junk" DNA really does, so a quick and dirty breeding program over a few generations isn't going to make very many changes.

Human behaviour like gender roles, family structures, super groupings like family, clan, tribe or the various size groupings that human beings can recognize (family 7-10, Clan @ 30, Tribe @ 100 people) is likely not going to be impacted through breeding. Indeed, the only reason that things seem so different today isn't due to biology, but the fact that technology frees us from most of the traditional roles and limitations, and we have the wealth and surplus energy and resources to allow for experimentation. A post apocalyptic environment with limited numbers of people will likely see a quick reversion to traditional roles and values, as they were evolved over prolonged periods as being the most efficient means to ensure survival in a world with limited resources and energy.

So the Organization will have to define the nature of the apocalypse in order to determine the best possible pool of survivors, and the rate of replenishment (i.e. how fast to repopulate the world), while accepting that the various post modern ideas of human organization and gender are likely going to be swept away as humans draw upon the well tested responses that allowed us as a genus to survive for millions of years, and the Ancestors to survive through ice ages, megafauna and other hardships to migrate across the globe and become the Earth's dominant species.

The hard part for your colony is that they're taking people from a wide variety of ethnic religious and racial backgrounds.

This might cause some tensions at least for the first few Generations. Let me be clear I don't think that the colony would necessarily split. But that it would be impossible to prevent the colonists from forming factions within the colony. Factions don't necessarily have to be hostile to one another but the possibility for hostility between factions would be there.

The IQ test my crazy overall average human intelligence but not buy as much as you think. True smarter people tend to have smarter kids, but they can also have stupid kids.

Another thing you might want to consider is adding more professionals with the skills you need to start a colony. Right now you're only considering skills in 10% of the cases I think we need a lot more doctors, Hunters, biologist, leaders than you think. Me personally I would raise it to around 25% or even maybe 30%.

There also the problem with the loyalty test there is no way for your test to work properly because the people will just say and do what ever they think will get them in the program.

Not the answer you're looking for? Browse other questions tagged society post-apocalypse space-colonization genetics or ask your own question.

39
What effects would a change in the nature of human sexuality have on society and infrastructure
18
If no children were born for 40 years, what would be the social and economic impact after births resume?
5
How long would it take for inbreeding to become a problem within a certain population?
8
Planetary Colonisation; how to retain ethno-racial appearances over millennia?
10
How to govern marriage and family law for system recognizng polyamory or short term relationships?
5
What is the result of a genetic mutation that disallows female offspring?
3
What genetic modifications would be beneficial for post apocalyptic warriors?
4
How can a terrorist group link a biological plague to a specific genetic signature?