Could it be possible to build a Pew Pew Laser?

What I'm talking about is a gun that shoots red laser beams at the speed of light in pulses in an equivalent of semiautomatic fire, delivering electromagnetic damage to an enemy that melts through his armor and slices through body parts while making a pew pew sound of some type? Something that makes cauterized holes and slices through the target, plus or minus lighting nearby tissue/clothes on fire.

Think blaster from Star Wars, if the beam traveled at the speed of light and not a crossbow bolt, but otherwise behaving as a blaster does in all other respects. Is this possible, unlikely or not?

Man portable laser weapons and sidearms are not going happen soon at our current level of technology, mostly because the energy density of portable power sources is too low, and the heat rejection issues of lasers (especially visible light lasers) is pretty high (something like 20% of the input energy is converted to laser light). Even Free Electron Lasers with a theoretical "wall plug" efficiency of 65% would have issues, especially since an electron beam moving at close to the speed of light would be a source of pretty intense radiation.

There is a reason laser weapons are currently designed for use on ships, aircraft and large ground vehicles. More on the mechanics of laser weapons on the Atomic Rockets page.

As for sound effects, a pulse laser (which is what you are describing) would actually sound much like a current semiautomatic rifle or machine gun. Ne "pew pew" but rather "crack-crack-crack".

As for the mechanisms of damage from a laser weapon, Atomic Rockets has pages devoted to that as well (although the general thrust of that section is massive megawatt+ weapons for spaceships). The principles are the same, however, and by filling in the appropriate numbers, you can calculate the potential damage your laser weapon can cause, range and other important information.

Now the theoretical workaround for a man portable laser weapon is going to sound strange; use chemical energy stored in disposable cartridges. Each cartridge is pushed into a chamber where the energy is rapidly released. The hot gasses pass through a MHD generator, and the electrical energy is converted into laser energy while the empty cartridge is ejected and a fresh one inserted. 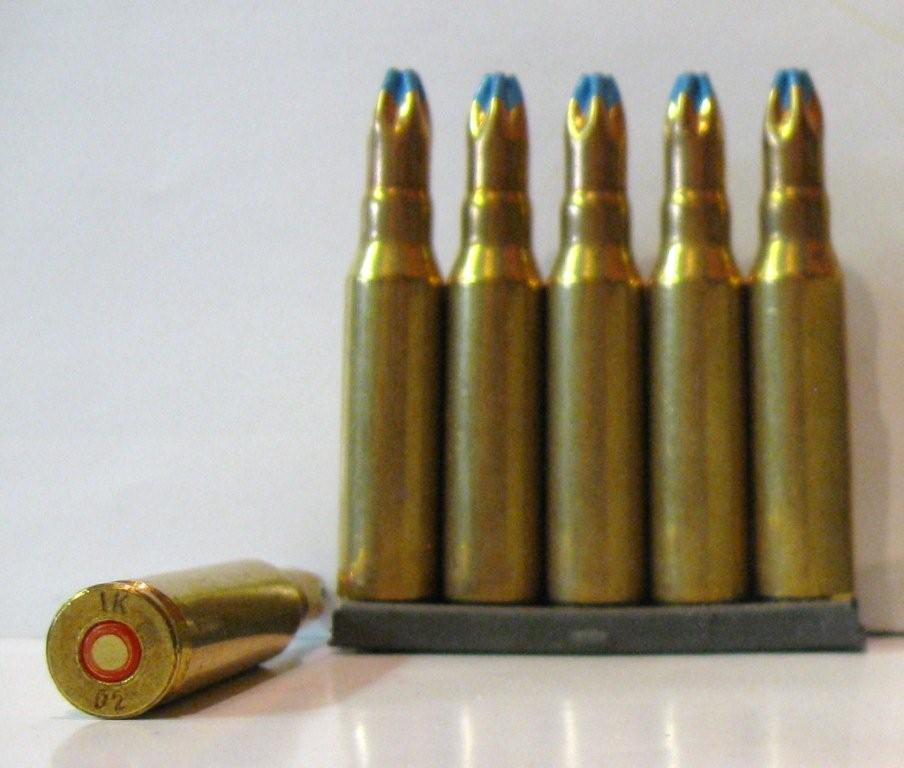 Of course, you could make things simple and just have the chemical energy drive a projectile directly... 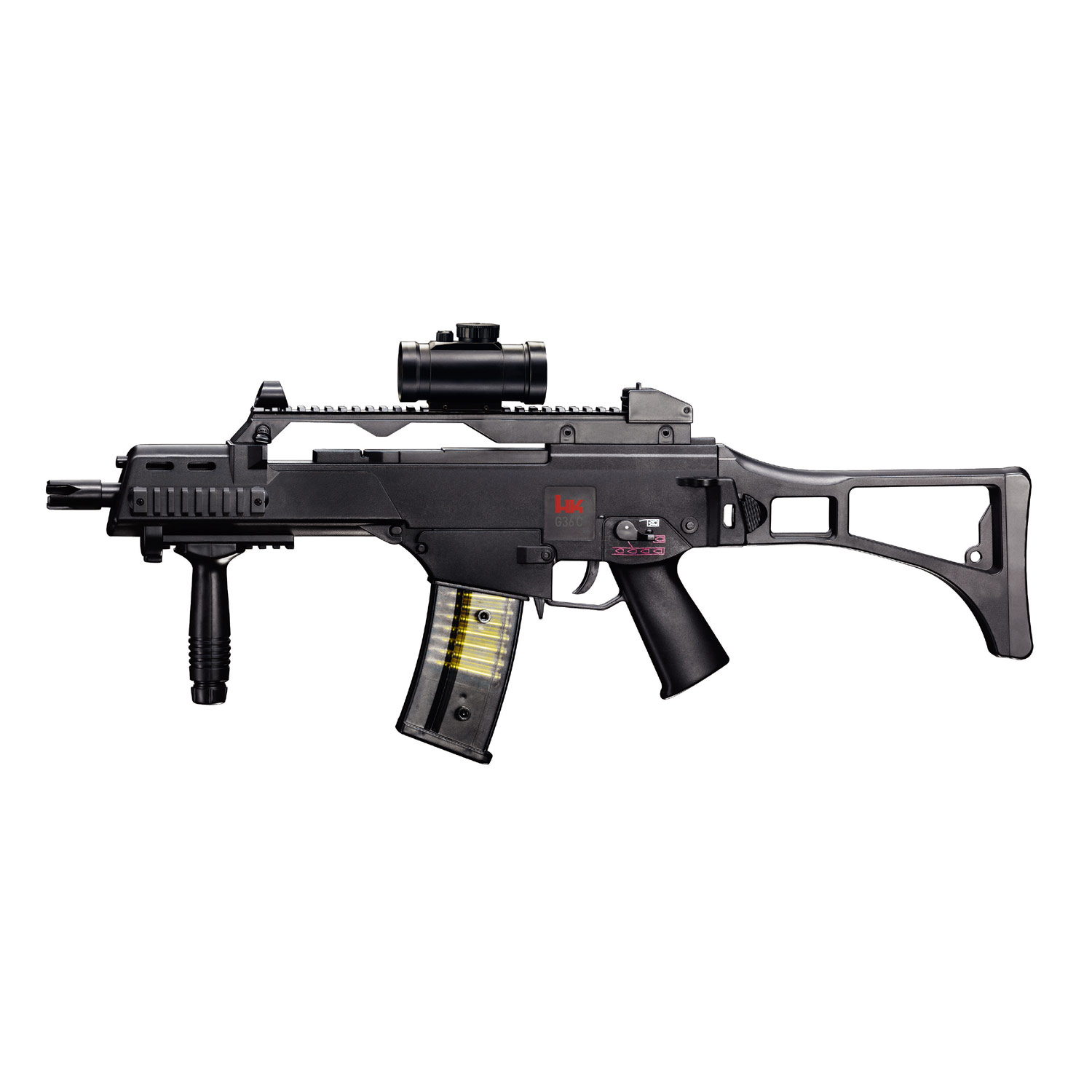 Pew-Pew sound would definitely not come from the laser beam itself - light doesn't make any discernible sound. I could see you making it an artifact of the power rapidly charging and discharging, though it's not necessary for the device to function. Typically solid state electronics are pretty silent.

As mentioned in a comment, light moves way too fast for you to see. Assuming you could shove that much electrical power in a blaster-sized package (not possible with modern technology), you might have something slightly close. Some differences includes that there would be no recoil to the shot, and no explosive impact - it would burn the target, and not much else. Also, even the most powerful modern lasers take time to put a hole in a target - a sustained beam, not a gun-like shot in a single instant.

Closest existing thing I can think of to your answer is a magnetron gun... You mentioned electromagnetic and laser as the same thing. They are not at all. You should touch up on some scientific articles regarding this, it's quite interesting. Even in a magnetron gun you can not see the radio waves going through the air (it is a HERF, high energy radio frequency), unless you covered it in flammable gas... :/. Also pew pew sounds don't really exist in this kind of thing unless you are slowly deflating a balloon with it. :)

I know that this type of weapon is not a laser, and probably not exactly what you think, but there is a theoretical weapon explained in this video called Plasma Railgun. Basically, it shoots plasma "bubbles" with electromagnetic fields that can reach speeds of 200 km/s and higher temperatures than the sun.

It could be visible for the eye (200 km/s is REALLY fast), but it's not a laser, I don't know if make Pew Pew sounds, but I really hope this helps you.

Several people have commented that light travels too fast to see it travelling in bursts.

Here's how you can overcome that and produce any apparent speed from zero to C. The gun fires pulses of say a metre in length in very rapid succession. Thus the pulses overlay each other. There is a critical level of overlay that causes the air to ionise. It is the maximally overlaid portion that travels at visible speeds. (I'll add the maths here when I have time).

The main problem is that you want red. Air fluoresces in what is called electric blue. https://en.wikipedia.org/wiki/Ionized-air_glow

You could use overlaid bursts of a red laser without having to cause ionisation. The apparent slow movement of the beam would be caused by an animation effect of rapidly repeating pulses combined with persistence of vision. However there would have to be sufficient dust in the air for it to be visible from the side. Maybe the gun could project a cloud of powder or smoke for some unfathomable reason. Maybe the anti-hero has bad dandruff.

This is pretty easy. You amplitude modulate the pulses. As they pass the listener and the air is distorted you get the characteristic Doppler effect. Only an observer at the side would notice the pitch change. For the shooter and the victim the pitch would be constant but the volume would still vary.

This is another possibility that doesn't use lasers. I'll have to flesh this out later.

Not the answer you're looking for? Browse other questions tagged weapons lasers .

20
Can a laser in outer space really appear as visible "bullets"?