In our universe infinite energy is not possible, at least given the known laws of physics.

But in another universe what would allow for energy to be in the same amount as space?

But how large is space, as we know our universe doesn't have magic walls that say ''hey the space ends there'' therefore,probably it's possible that our universe has no limits in space,that's why it never stopped expanding faster than the speed of light and it accelerates as it grows.

This other fictional universe has the same amount of space as ours which is infinite plus an equally infinite energy.

How to make that work?

The answer to this is very dependent on details. There's many ways to approach this and they lead to very different results.

The first question is whether you ever have infinite energy density. This causes all sorts of equations to break down for the same reasons as a naked singularity breaks down all the laws of physics. Since energy and mass are entwined in relativity, this would also imply infinite mass, which causes even more problems. More than likely the answer to this is "the physics of this universe would be completely and utterly unrelated to anything in this universe." This sort of thing only shows up in the big bang models, and we readily recognize that they're just models to describe what might have happened. If singularities like that were discovered in our universe, it'd be a big deal.

Another option would be to have infinite energy but finite energy density. If you have infinite space, you can pull that off. This can be done in a few ways. One approach is to have the entire universe be "warm," so there is some base energy available at all points permitting change to occur over time. This energy, however, may not be available for doing thermodynamic work. If that energy is in the form of waste heat, then you can't use it for work.

Another approach would be to have the infinite energy in a form which is captureable for work. To do this, we would need to toss away the laws of thermodynamics. The laws of thermodynamics that we are so familiar with only apply to systems that are at thermal equilibrium, and you would be able to ensure the universe never reaches equilibrium. The field of non-equilibrium thermodynamics is a very open field at this point. We're constantly being surprised by results found in that field, so I won't speculate as to what might happen.

You can have the energy density decrease as you get further away from some magical "origin" point. In this case, you could build a universe where you could simply exist forever, because you'd always be able to find an energy gradient, which is the key requirement for doing mechanical work. This would be a departure from our physics because in this world, "we cannot define the position of God's Throne in space." There is no point which is any more central than any other, or any more "fixed" in space.

A final intriguing option would be to change the boundary conditions. We typically assume that energy approaches 0 as we get far away. However, you could have an oscillating boundary condition that has energy going on forever in a repetitive pattern.

This one is rather interesting because we've got examples of it in the world of simulated automata. One interesting class is the 1 dimensional elementary cellular automata. These are simulated automata consisting of a line of cells which are either alive or dead, and change states each timestep based on their state and the state of their two neighbors. They are typically known by their "rule" number, which is a number describing the entire evolution function of the automata. One of these, Rule 110 is particularly beautiful and interesting: 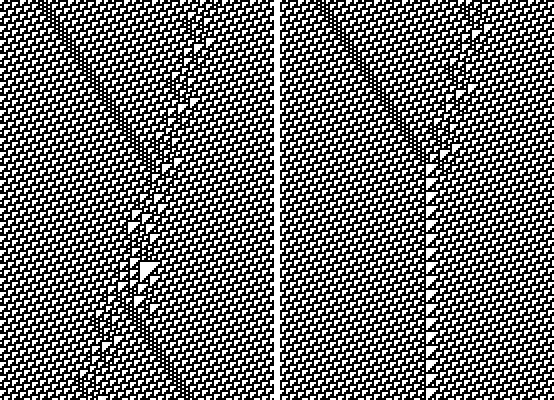 In these pictures, the top row is the "starting state," and each subsequent row is a new generation created by applying the rules of Rule 110. All you have to do for any cell is look at the cell's left neighbor, itself, and its right neighbor, and replace the state of the center cell using the following rule.

What's interesting about this is the pattern of small triangles of size 3 that build the "backdrop" for rule 110. This actually appears as long as you have at least 1 "live" cell in your initial state. Accordingly, it is common to explore the movement of the more beautiful triangles on an infinite repeating array of these size 3 triangles.

This would correspond to an oscillating boundary condition. Anything "interesting" in this world can assume that there will be a continuous influx of energy from this osculation which can be harnessed.

As it turns out, Rule 110 is considered to be very special because it is Turing complete! That's right. Anything you can do with your computer can actually be simulated using these little triangles. They make streams of them collide in very particular ways to execute operations using something called a cyclic tagging system. 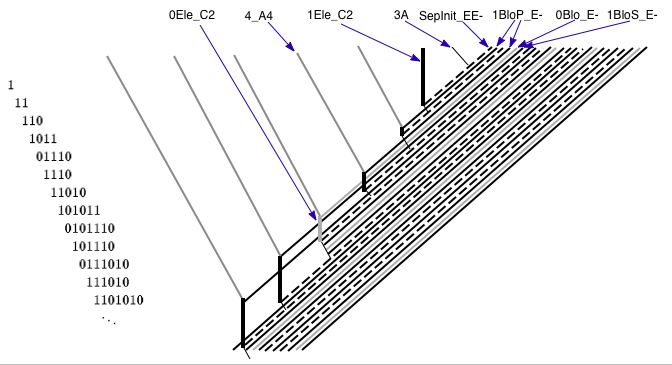 Incidentally, this is very similar to a rule we see in nature, Rule 30. Rule 30 is:

We see this in cone snails, used as camouflage. 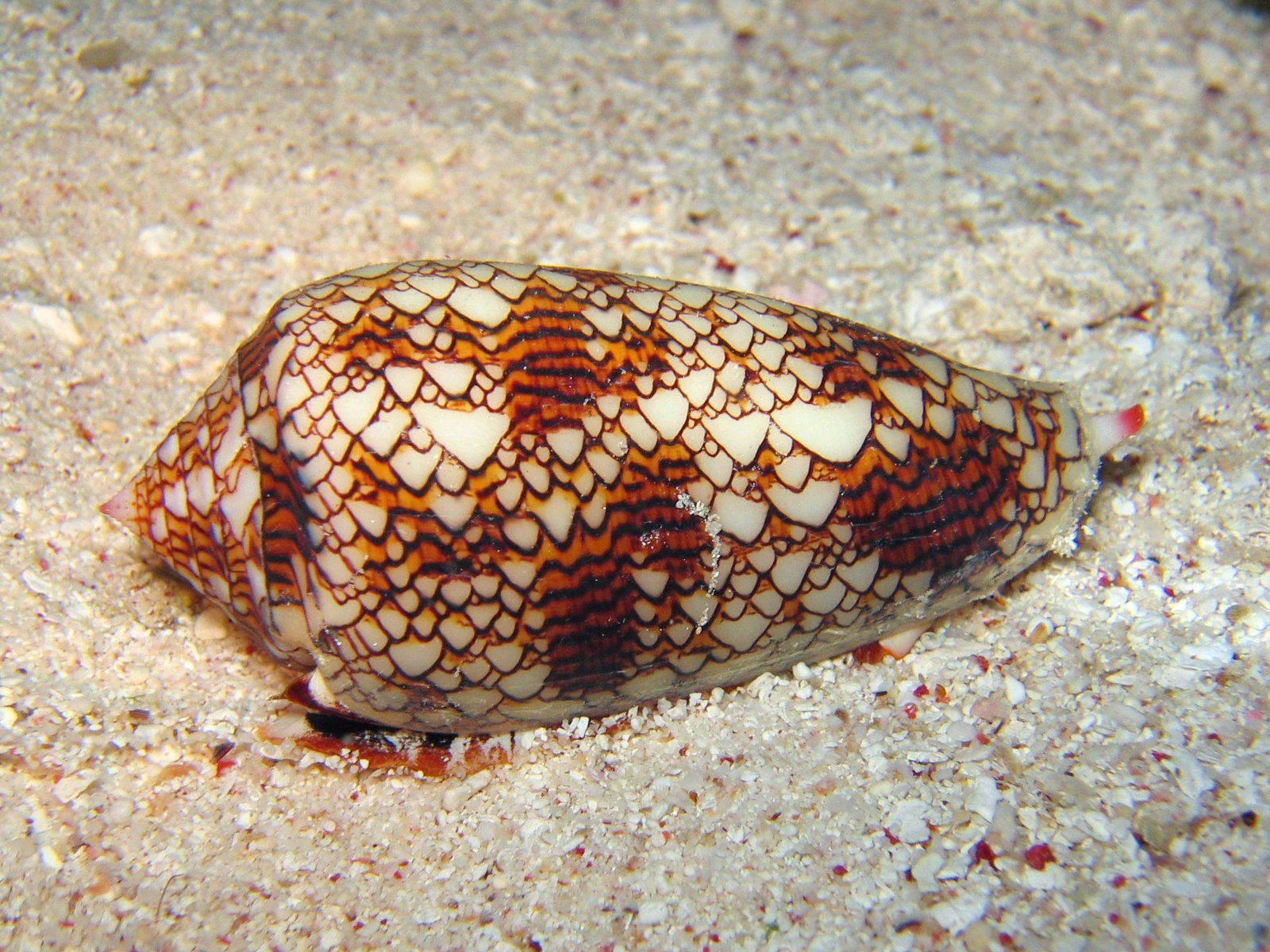 So, in short, infinite energy changes everything, but there are ways it can be kept tractable, such as having oscillating boundary conditions. Some of these cases even have really interesting beahviors!

You should make the energy distribution of the universe uniform. In your universe, there is no big bang, universe came to be in an instant and has no bounds. Your universe does not expand, but it does not collapse either; as dark energy, similar to our universe, prevents it.

One hypothesis for what 'dark matter' might be in our Universe is a parallel Universe that is intersecting with our Universe. The hypothesis holds that gravity can permeate through parallel universes but nothing else.

Well, in your Universe, how about allowing some form of energy to permeate across the intersection between our Universe and another (it doesn't matter what type of energy, as energy is transferable. For example, energy in the form of IR waves to heat water to turn massive space turbines). What we think to be limitless energy is 'dark energy' stolen from another Universe. The question becomes, what happens when that Universe finds out?

To allow infinite energy in your universe, you simply need to have some sort of thing which creates energy from nothing. Unobtanium, magic, or some specific physical property or reaction that produces energy from nothing will make the amount of energy available infinite, while still allowing it to be useful.

The important distinction is between "energy" and "available energy" - as has been pointed out, if the universe current contains an infinite amount of energy, then nothing can happen; it's frozen into an eternal stasis of frenetic motion, in which nothing can live.

If, alternatively, you make the total current amount of energy finite, but allow it to increase indefinitely, then you can end up with a universe that looks very much like ours, but that allows the possibility that matter - and life - might last forever (see: heat death).

It's the same with space. If your universe had an infinite amount of current space, we would already be in the heat death; instead what we have is matter gradually spreading out, so that effectively the amount of space is increasing. It might or might not increase infinitely; we don't know yet (see: Big Crunch).

Not the answer you're looking for? Browse other questions tagged science-based physics science-fiction hard-science universe or ask your own question.

8
Slowing the Heat Death of the Universe
1
Escaping the universe
1
Could the principle of the zero point energy universe be used for infinite energy?
2
What would entropy look like in an infinite number of universes?
13
How small can the universe be while still appearing infinite?
1
energy sources for intergalactic travel in fictitious universe with similar laws of known physics but different evolution
9
What would be some ways to balance energy/mass from a parallel universe to another when someone - or something - travels through a wormhole into it?