Can humanity survive on red planet

Research is done each and everyday, challenging the boundaries of what we used to think was impossible. After all, it used to be thought impossible to land man on the moon.

Is it possible, give today's technology, to travel to the Mars and start a colony? And if not, what advances would we need to make it possible?

According to my understanding and personal knowledge discovery. this is how humanity can survive on red planet. 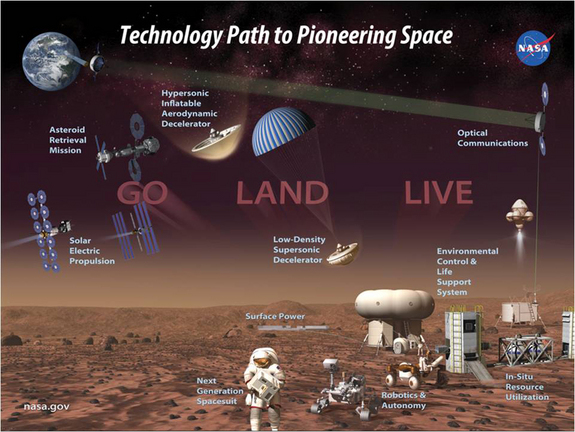 Mars has usable resources such as water ice that could help sustain future expeditionary crews on short missions, or pioneers living permanently on the Red Planet.

But accessing and exploiting Martian water ice and other resources,a process known as In-Situ Resource Utilization (ISRU) is easier said than done. So I think experts have to strategize what’s needed to allow astronauts to maintain a Martian lifestyle on the Red Planet.

Long answer? We have so much research to do, so much innovations that will be needed before such a feat becomes even remotely possible. Why? Where to even begin...

First is the most important: radiation. Because Mars has no magnetosphere, its denizens would not be protected from the background radiation of space (cosmic radiation), nor the blasts from the sun (solar winds). These are things that astronauts (and cosmonauts, and essentially any space traveler) can tell you about, and many have. They tell tales of 'flashes of light as they close their eyes', which is in fact the background radiation striking their retina. This radiation can attack DNA directly, increasing the risk of cancer.

Second up is the lower gravity of the red planet. Yes, it is almost like earth, but it has 0.8G, so 20% less gravity than Earth. This would mean that our muscles and bones would be stronger than the gravity needs it to be, meaning we would lose muscle mass and bone density living there. Though the difference isn't excessive, it is important to keep in mind. Especially when people want to go from Mars to Earth -- their bones and muscles would have exactly the opposite problem.

Then comes the biggest issue: housing. Mars would need a stable habitable area. Check out Mars 1 Project, seeing as they have the idea already.

So, yes. This is possible, and though it is within our current technological reach, we have so much more to learn and so much growing to do as a society. Time will tell when (not if) this becomes a reality.

Not the answer you're looking for? Browse other questions tagged solar-system mars exploration or ask your own question.

5
Effect of red giant phase on the Solar System
5
Can we land on a planet with methane-oxygen atmosphere?
11
Two countries have a five thousand mile desert between them. How can a city survive there?
13
Is it possible to have a Earth-like planet with a red moon, similar to the color of Mars?
9
When did humanity have the knowledge to prove this semi-flat world is an octagon?
6
Planet Orbiting a Red Dwarf
29
Can a planet have a day that's always longer than night?
7
What would be the effects on a planet orbiting a shedding red giant?