Cerberus was a three headed dog, commonly depicted with a collar and tail of snakes. Such an organism is quite difficult to justify, but how can such a creature appear that way? Is there a realistic way that Cerberus could evolve?

No, not without some really contrived circumstances

To evolve three heads, Cerberus would need to evolve, for a long time, in a niche where it's better to have three sets of eyes, noses, teeth and brains than a single set of highly adapted eyes, nose and teeth. Let us note that evolution doesn't usually just sprout a new feature to achieve a given purpose, it starts with an existing anatomical feature then molds into the ideal shape for a given niche. Two extra heads with duplicated skulls of the first head is highly redundant. Practically everything you'd expect from three heads can be achieved more cheaply with a specialized single organ. Need to see in 360 degrees? Get chameleon eyes. Hear behind you? Articulated ears. Need to eat quickly? Get a giant mouth with lots of teeth.

I can't think of a set of circumstances where it's a clear and long standing advantage to have three heads instead of just one. There are real costs to metabolism, neurological complexity and over-all competitiveness that come with three heads compared to a single head.

Now, if you have a magic gene splicer and nursery, anything is possible...but that's not typical evolution either.

The side heads are actually hands

Multi-headed animals are not very effective from an evolutionary standpoint, since there's not much you could do with three heads that you couldn't do much better with only one. But a quadruped with extra hands could be useful - four legs for stability, plus hands for manipulation and carrying things.

To evolve this structure, you'd probably have to start off with a six-limbed body plan. On Earth this didn't happen with vertebrates, but there's no real reason why it couldn't happen on an alien world. (This means that Cerebus could be in the same clade as centaurs, griffons, and dragons!)

Over time, a centaur-dog could become more specialized for hunting and killing, and its hands could develop into powerful claws with pseudo-teeth that could tear prey apart from multiple directions like a pack of wolves sprouting from a single body. From there, the hands might evolve to look more like heads in order to confuse prey, who might fight back by attacking the false heads instead of the real one.

It's probably possible, but extremely unlikely, to find a Cerberus that would live more than a day. Many advanced mammals experience polycephaly but nearly all of them die within weeks of birth. 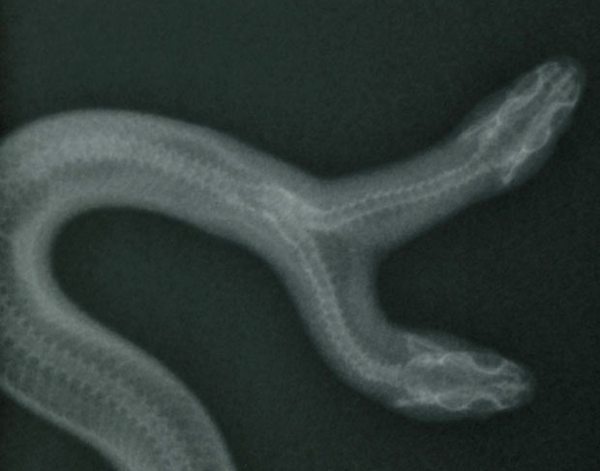 If let say a dog like the Rottweiler, Doberman, German Shepherd or maybe even a wolf was born with polycephaly and survives to mate and pass on its three-headed gene to its offspring then Cerberus is plausible. But what could likely have happened was that the acquiring of the third head was a gradual process. This could be supported by the fact that Cerberus was also depicted as a normal 1 headed dog, this let call it as Cerberus Senior. Cerberus Senior could have had the Polycephaly gene in it but as a dormant gene probably from some distant or recent ancestor. This gene however might have been activated in its offsprings or descendants, which could be supported by the fact that the three headed Cerberus was portreyed as the brother of the two headed dog Orthrus. If this gene was activated correctly in the two offsprings or descendants,Orthrus and Cerberus , that is if their brains each work in harmony with each other, then it is a successful recreation of Cerberus and Orthrus.

The snake tail could have been caused by a mutation in the tail hair of the Cerberus Senior or its predecessors that made the tail hair scale like, like the scales of a pangolin which is just mutated hair. This can be supported by the fact that both Cerberus and Orthrus are depicted as snake tailed.

Therefore Cerberus and Orthrus are scientifically plausible but it is however highly unlikely that these mutations will be perfect and that Cerberus or Orthrus will survive till maturity.

It's a wolf with 3 heads. 3-headed animals are not unheard of, so it would be possible for a 3-headed wolf to exist. The snake tail could be a symbiote, trading protection of the rear in exchange for blood and poop as nourishment. I'm not so sure about the mane of vipers, but our Cerberus could have snake-like locks of hair that look so much like snakes that people would think that the mane was made up of real serpents. Therefor, Cerberus would be scientifically plausible.

My answer is actually going to be a variant of my answer to THIS question based on some creative developmental handwavium. I would imagine a fantasy world where a developmental mutation occurs, is somehow taken up by a common virus, and spread to many new species. In this case, you need a stable genetic shift that causes essentially all fetuses to create conjoined twins. Fortunately, we're talking domesticated animals, so the evolutionary pressures have a lot more to do with what humans like, rather than what is adaptive.

You start with a dog that consistently creates conjoined twins that re-merge due to developmental genetic variants. Maybe this is because the dog is a fun chimaera with two heads and neat growth patterns. Maybe they think guard dogs with extra heads are terrifying (this is especially true if there are superstitions about multi-head dogs). Who knows? All the variants that are non-viable die, and the ones that are merely dysfunctional are kept as really cool pets. But they could be at least partly functional, as humans with two heads and conjoined twin syndrome are sometimes reasonably functioning. So for argument, one head is consistently functioning, the other not so much. The more functionality, the more people love them and select for them.

Now that you are selecting for crazy heads, A second mutation occurs. The non-functioning twin is getting different developmental signals (which is why it's the non-functioning one) and this one starts consistently growing two heads in a polycephalic manner. Now the resulting conjoined twin suddenly has THREE heads. This creates a huge stir among the breeders, who select for this like crazy. It LOOKS like a Cerberus, which may have been the original reason for the two-head breeding craze.

You could end right there, if you wanted. But with a selective pressure to have more function, eventually the two "minor" heads become able to move and articulate. Now your three-headed guard dog might actually have some real usefulness, and the lesser versions are phased out. Because this is all developmental, you'll probably still get a natural failure rate where variants regularly occur. As long as people like the three-headed dog, they will keep selecting for increasingly stable versions.

Any other Cerberus-like characteristics would be largely cosmetic and easy to select for.

In the Ringworld books, the "Puppeteer" aliens have their brains located in their torsos, while their heads are more like a hand/eyestalk combination equipped with a mouth. An apex predator with a similar body plan could look very much like Cerberus or the Hydra.

As for the "mane/tail of snakes", how about jellyfish-style stinging tendrils? If they were muscular hydrostats, like tentacles, they could be used to actively attack prey or defend the creature.

33
How could polycephaly evolve as a byproduct of natural selection?
19
Would an evolutionary predecessor for winged quadrupeds start with four legs and gain wings? Or start with two legs and wings and gain extra legs?
7
What evolutionary benefits does a hexapodal body plan have?
6
Would dragons be less popular if their skeletons were as frequent as skeletons of dinosaurs?
6
What would change in a dominant/predatory animal given two heads?