I need help figuring out how a species of already low intelligence(orcs) can somewhat efficiently tame and use something like an ogre or a dragon to use in battle against humans.

The intelligence of the Orc compared to an Ogre is comparable of us to apes. Also when you think of Ogre think of something like you'd see in Warcraft not the type that turns to stone when in daylight

I'm developing a game where a race of orcs somehow enslaved the surrounding ogres and can make them fight or gather resources.

It needs to be something they can defeat themselves, with numbers. They'd capture it, cage it, and use pain, plus the threat of more pain, together with food, and the threat of no food, to break down its resistance. Once you have it co-operating, then you can start to train it. This approach doesn't take a lot of brains, but it does require an appetite for being cruel. Most versions of orcs fit the bill.

This will work on D&D-style ogres, but not on a dragon, which can simply kill too many orcs to make the attempt worthwhile.

I wouldn't 100% base your ogres/orcs/dragons off Warcraft. Indeed, tweek the levels of intelligence. For example, since it's your world, you can make the dragons low-intelligence (maybe smaller in size) and maybe instead of the orcs being the smarter ones, you can make the ogres smarter. Or even dragons enslaving those two races to fight for them.

But as another answer states, think about how whatever race/creature will be captured and enslaved also.

The intelligence of Ogres verse Orcs tends to differ from one fantasy universe to another. However you mentioned Warcraft, so I will go with that. 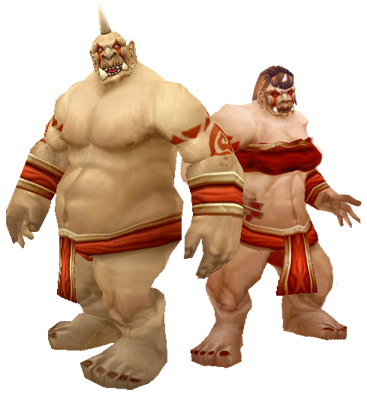 Ogres are originally from Draenor like the Orcs. Orcs, particularly some of their shamans, have been shown to be highly intelligent, comparable to that of a human. The Ogres in Warcraft aren't as smart as the Orcs but they still possess some basic intelligence.

Many of the Ogres were enslaved by another race from Draenor called the Gronn, 20ft tall beasts that towered over the Ogres (who were 7ish ft tall). The Orcs helped the Ogres rise up against their cruel masters, and together they defeated the Gronn. Ogres have been fighting as part of the Horde ever since, they were not tamed.

Later on Ogre Mages were created, much smarter ogres who would cast spells, presumably at least of equal intelligence to an average Orc.

Sorry to go on, just upsets me when people go picking on Ogres for being stupid. They have feelings too ya know.

Not the answer you're looking for? Browse other questions tagged mythical-creatures fantasy-races or ask your own question.

16
Cohabitation with large creatures
11
What can a human offer an intelligent badger-like animal for trade?
27
How would you design a dragon-like creature so it could sew?
4
Can a continental scale creature develop it's own ecosystem? How?
3
How can a creature caught between realms feed on mortal prey?
8
How can an amorphous creature change viscocity at will?
6
How Can a Creature With Focus Come to Exist?
4
How Can a Creature With Knockback Come to Exist?