I request some help with the design of one particular denizen of my fantasy world, tentatively named Boar Troll. It needs to be an ungulate or closely related creature with emerging sentience, and that's as far as I am right now. In fact, some of its requirements happened while drafting this question.

I want to go from some member of the mesonychia order about 25-30 MYA to the creature described below. What real though extinct species might have gotten started on this path? Where would this creature's evolution have split from the real world? What living species might it best resemble (i.e. ox, sheep, warthog, etc.)

These are the desired characteristics, though none of this is set in stone.

Please do not get too hung up on the name Boar Troll, nor either image. I needed a name and mental concept for rough drafts and this is what came to me. Answers here could influence the final name and appearance. 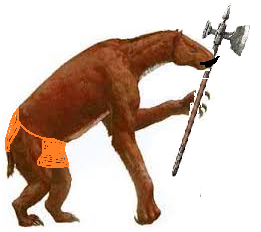 Inspiration for the Boar Troll includes Tolkien's orcs, Paolini's ra'azak, and Sanderson's koloss. However, I also want to clearly differentiate them from anyone else.

Boar Trolls may be mentioned tangentially in a handful of stories, but their central role will happen during a succession crisis where a corrupt cousin of the would-be rightful heir captures some and trains them under the whip. Blah blah blah minion horde blah blah reign of terror blah blah comeuppance.

This question is a proud alumnus of The Worldbuilding Sandbox and part of the Anatomically Correct Series.

When it comes to the evolution of 'beastmen', I've often considered it much more realistic to start with a hominid and find a reason to give it animal features than to start from your base animal and find a reason for it to become both sapient and humanoid. When you get right down to it, a boar-troll is basically just a human with a piggish face and tusks - all you really need to do is adjust the morphology of a human face and you're golden.

That being said, despite being common in fantasy settings, evolving a humanoid with a pig's face is tricky no matter which kind of creature you want to start with. The flat snout and tusks that define a pig's face are mostly adapted for digging and rooting around in the soil, something that's hard to connect with a bipedal lifestyle. Tusks, at the very least, are useful for fighting, even so, most animals that have them use them primarily for digging, fighting being a secondary feature (fangs are more suitable for straight fighting).

One possibility is to have the creature use its tusks for breaking open trees in order to get at healthy insects underneath the bark. Perhaps they do this while climbing, so their hands are usually occupied.

Alternatively, maybe their ancestors hunted pigs, so those who could blend in easier were more successful hunters. If a boar-person is hiding in the brush and sticks his head out to get a closer look at his quarry, the pig might not realize it isn't another pig until his whole body emerges, giving him a head start.

The best answer, though, is probably the old evolutionary handwave of sexual selection. If the ancestral boarfolk women find men with big tusks and piggy snouts attractive for whatever reason, over time the species will grow more piggish. This works well with the typical subversion of beauty standards trope, as boar-folk will likely still find the same features attractive and will consider humans ugly.

Since you're insistent on it evolving from a non-hominid, let me direct your attention to Chalicotherium, or as I'd like to nickname it, "Gorilla Horse". It was a large browser that fed by rearing up on its hind legs and using its modified hands to pull itself up onto tree trunks and pull leaves down. Although it was a member of the odd-toed ungulates (and likely started with a longer neck that could reasonably eat low branches already), it is possible that a pig relative could evolve into something similar if it started by placing its hooves against trees and scraping off bark with its tusks to get at insects, as mentioned above. Chalicotherium probably didn't use its front legs for digging (some scientists thought it might but its teeth don't show signs of eating dirt-covered foods), but a pig version of it might be an opportunist that could both dig up roots and feed on bark, insects, and branches. From that point, it could develop tool use, intelligence, a hunting lifestyle, and full bipedalism the same way humans did. (Hey, pigs are already pretty smart, so you've got a head-start.)

The question concerning why it would retain a pig's snout and tusks after it stopped using its face as a digging implement still applies, but the reasoning used with hominids still works.

To answer your question, I will go through the requirements step by step.

Everything else is culture related and does not need to be justified.

Not the answer you're looking for? Browse other questions tagged science-based evolution creature-design fantasy-races .

33
Why would orcs have tusks?
7
Would a humanoid creature with pointed legs/feet be able to stand, walk/run and maintain balance?