Is it possible to have two or three planets in a stable orbit together?

I have three planets. Let's call them Un, Deux and Trois.

Is it feasible for all three to be orbiting one another, close enough to be seen clearly by eye? All three are large enough to be earth equivalents.

What would the days be like? Let us say that each planet rotates once every 24 hours, performing an orbit with the other planets every three days? I'm thinking there would be hours/days of twilight as one planet blocked another.

Two planets in an orbit works fine: either a conventional binary system or a co-orbital system such as is found with Saturn's moons Janus and Epimetheus.

Three planets don't work. The conventional stable solutions to the n-body problem (the L4 and L5 points) are only stable if the objects in the Lagrange points are small relative to the primary objects. The unconventional solutions are all unstable.

This is a variation of the Three Body Problem. While one might imagine a situation wherein three bodies orbited each other, any variation in their mass, any cumulation of impacts, the passing of another body, etc. would all quickly throw off the balance and cause the orbits to destabilize. Such destabilization would likely cause two to collide and the third to spin off.

Most orbits are stable because one body is so much more massive than the other(s), and dominates the equation. However, even in these circumstances over time you might see real changes that suggest they are only in equilibrium on short time scales. Three roughly-equal bodies would not, in classical physics, find themselves in this situation.

If there was a non-classical situation (magic, crazy technology, etc.) that forced the situation of three Earth-like planets orbiting each other around a more distant star, all along the same stellar plane, this is what you'd probably see:

Ah! My internet connection died while I was writing my answer, and it seems Mark beat me to the punch. So allow me to elaborate on the horseshoe orbit of Epimetheus and Janus, if I may.

As previously mentioned: three planets in such close proximity just isn't plausible. There are several realistic alternatives for 2 planets however, including a binary planets and the co-orbital horseshoe.

Binary planets are more in the vein of what you're looking for and relatively easy to explain. A binary/double planet is a system with two planet-sized objects, orbiting a common center of shared mass, orbiting a star. But we don't know a lot about systems like this.

But I think the other option - the horsehoe orbit - is certainly notable and just as, if not more, romantic. We also have a very good example right in our very own solar system.

Epimetheus and Janus, both moons of Saturn, are co-orbital. Technically. It’s weird.

Their semi-major axes (think average distance from Saturn) are slightly different. Not a lot - less than either’s diameter - but still a bit.

Kepler’s laws of planetary motion dictate that the moon that is slightly closer to the sun will complete its orbit slightly faster than the other. In this case, the inner moon completes its orbit 30 seconds faster than its partner. That might not seem like a lot, but every day, the distance grows… and it adds up.

Eventually, they meet each other. And when they meet, it gets even weirder.

As they tug on each other, the inner moon loses speed, falling into a slightly more distant orbit, while the outer moon accelerates into a closer orbit. The cycle repeats. 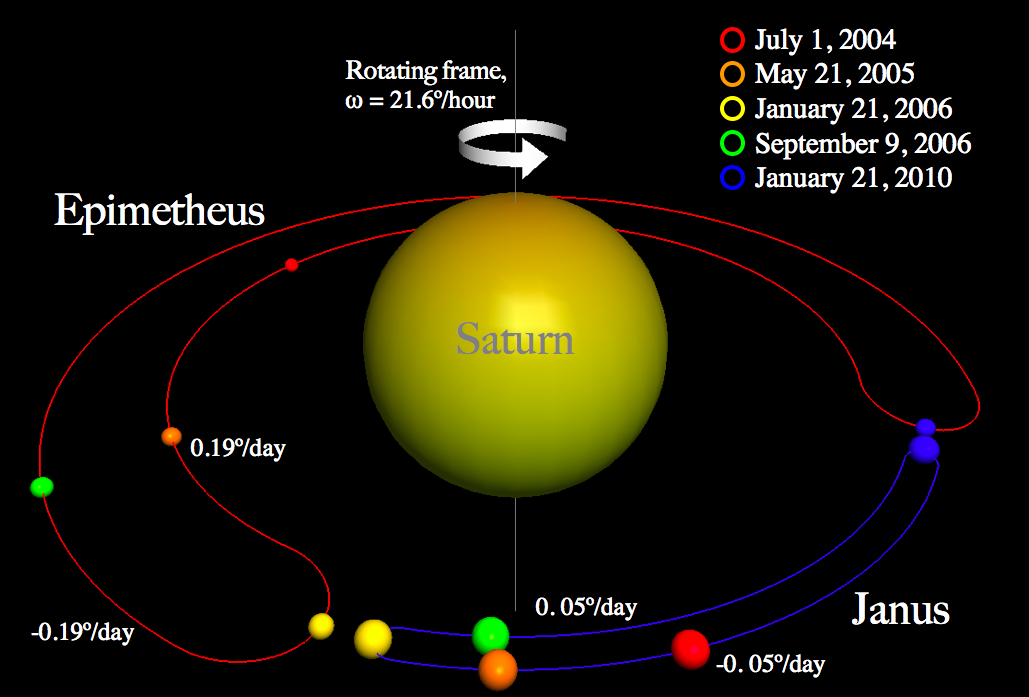 Imagine seeing this from the surface of either moon: standing on Epimetheus, watching as Janus races toward you, getting closer and closer, larger and larger, then fall away into the darkness. Or maybe from the surface of Saturn? It would look weird.

There’s a lot to play with here. Who is to say they have to be moons? It could be possible for two planets to behave this way.

The idea of a binary planet + lone planet together in a horseshoe orbit springs to mind. I really doubt it's plausible, but it sounds neat. And who knows? maybe there's a way to make it work somehow. There's a lot of strange stuff out there.

You can find more information about horseshoe orbits here:

https://en.wikipedia.org/wiki/Co-orbital_configuration#Co-orbital_moons (this is the link Mark provided)

I know for at least 2 planets, it is theoretically possible. Pluto and Charon are close in mass, though not classified as planets. The term for these kind of systems is a double planet or binary planet, I don't think they have found any actual planetary systems that meet this criteria, yet. I'm not an expert in orbits, but I believe that a triple planet system should be possible, as well.

As far as their frequency of rotation / eclipsing, etc, that could vary. Eclipsing may not even have to occur. Say 2 (or three) planets are in a binary group but their orbits with each other are always perpendicular to their orbit with their star, then they will not eclipse.

There are several ways for 2 planets to share the same orbit. The simplest is for them to be in each other's mutual L4/L5 Lagrange points, essentially staying 60 degrees apart along their orbit. 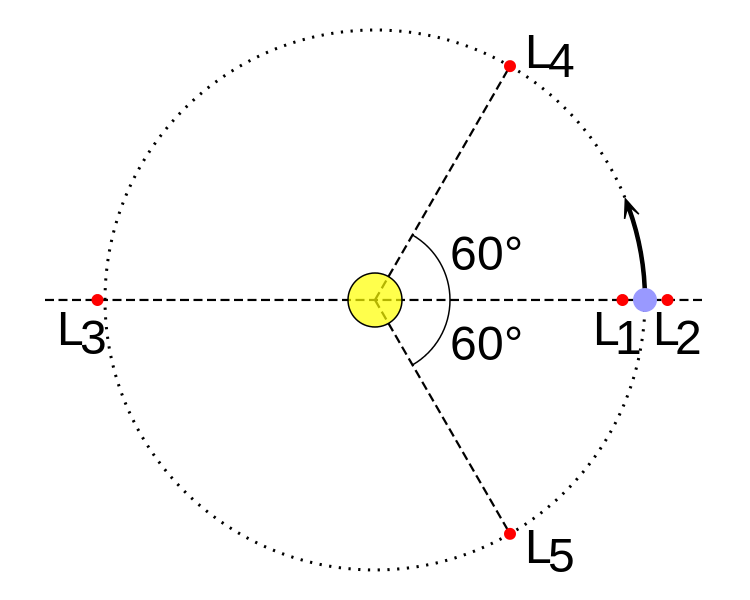 This configuration is generally stable. You can add a couple more planets in by making each of them a binary planet, with two Earths orbiting each other. (see here: https://planetplanet.net/2014/05/22/building-the-ultimate-solar-system-part-4-two-ninja-moves-moons-and-co-orbital-planets/ and here: https://planetplanet.net/2014/05/23/building-the-ultimate-solar-system-part-5-putting-the-pieces-together/).

With two planets orbiting in a co-orbital setup separated by 60 degrees, their rotation rates are not affected by the other planet. But, in the case of a binary planet, tides are likely to be strong enough to make the two planets tidally locked, so they always show each other the same face. In that case, both planets will have the same day, whose length is simply the time it takes the planets to orbit each other.

Two planets could also be in a horseshoe configuration, which can be stable but can only fit two planets, not three.

There are some other exotic classes of orbits that come close to satisfying your criteria (e.g., quasi-satellites and eccentric 1:1 resonant orbits).

Not the answer you're looking for? Browse other questions tagged planets space .

1
Three planets in a braid like configuration. Is it possible
5
At what distance from these planets should this moon be placed?
3
What are the required proportions of a moon that allow it to orbit around a planet?

5
Day/Night temperature variation on tidally locked binary planets
11
How can three planets be close enough to see each other
10
How would this tidally locked planet be affected by its moon and would the moon have a deaccelerated orbit?
18
How short can Milankovitch Cycles be on a world with a stable orbit?
45
Could two planets follow the same orbit and never "see" each other?
13
Can two stars orbit each other but each have their own planets in stable orbits?
7
What are the day and night fluctuations for a moon orbiting a planet the size of Jupiter?
11
How long would this eclipse last?
5
Could a binary planet system have a shared magnetic field?