I wonder if it would be scientifically possible, and what would be the explanation for an Earth-like planet with average surface temperature of 14°C, but a very hot ocean, like 80-90° C, covering 2/3 of the planet.

And how come the continental and air temperature remains stable with this hot ocean there? This world would be inhabited by earth-like mammalians and humans.

When you have a gap of 70°C between the atmosphere and the ocean.....well, you can't really have a gap that large, because heat is going to continually transfer from the oceans to the atmosphere. That heat transfer is actually what keeps the night side of the Earth from freezing; the oceans store heat and moderate temperature swings, releasing that heat overnight as the atmosphere cools. This is a big reason why coastal areas generally don't have the temperature extremes of inland areas, incidentally; they're much closer to that moderating influence.

Earth has only a few degrees of difference between oceans and atmosphere on average; the temporary fluctuations when the temperature gap is greater due to various circumstances are typically what produce hurricanes and other such storms. I'm not an expert on hurricanes, but that large of a temperature gap is likely going to create perpetual storm weather all over the planet, which is probably detrimental to life and is certainly not Earth-like.

Another huge problem: the boiling point of water under standard conditions and pressure is 100°C. The average temperature of Earth's oceans is far, far below that, but we get evaporation regularly that is the ultimate root of pretty much all rainfall. Spike that average to 80°C, and you're not going to have oceans for much longer; they're going to boil away. Raising the atmospheric pressure enough would raise the boiling point to where that doesn't happen, but that carries its own problems. I can't tell you precisely where the pressure would have to be at sea level, but I suspect it would be several times what Earth's air pressure is at that level. Whatever that kind of atmospheric pressure leads to, it probably isn't going to result in anything resembling Earth.

My final answer: No, your planet could not exist, at least not as anything Earth-like.

Heat flows from hot to cold at a rate in proportion to the difference in temperature.

Without something to cool the air significantly, the temperature would equalize, probably near the temp of the ocean, as that's the largest thermal mass.

There is no natural way to make that sustainable.

Because @Seeds already pointed out the implausibility of keeping such a temperature difference, let's assume that the land is magically kept insulated from the ocean at 14 degrees, while the atmosphere is not, and look at the weather consequences.

Approximately 35 degrees is a reasonable number for the core temperature of a typical hurricane. The vapor pressure of water at 80 degrees C is 355 torr, compared to 42.2 torr at 35 degrees. This means that the air in a typical storm can hold eight times as much water as an Earth tropical cyclone, and that, as a first approximation, rain would fall eight times as densely as in the middle of a typhoon. Rivers would have 8 times the flow rate as Earth rivers during monsoon season. This means 8 times the flooding, and at least 8 times the erosion potential. In some places, canyons could be carved out of solid rock in just a few tens of thousands of years.

The temperature difference between the 80-degree ocean and the 14-degree land would be 3.5 times greater. Again as a first approximation, storm wind speeds would be 3.5 times greater. This means that, rather than an ordinary gale with 50 km/h winds, coasts would experience winds of around 170 m/s, the eyewall of a Category 4 hurricane. Ordinary humans cannot walk outside in these winds. There will be no sand on beaches except in drifts and dunes.

These numbers aren't just maximums. They occur on every coastline, everywhere on the planet, every day.

At a high tech level, electricity production is much easier. Small wind farms and hydrothermal power plants are in every coastal settlement in the world (the settlements themselves are all underground, of course).

@Palarran said that the oceans would boil/evaporate away at a high enough temperature. This would happen, but I don't think it would be a problem for your world. 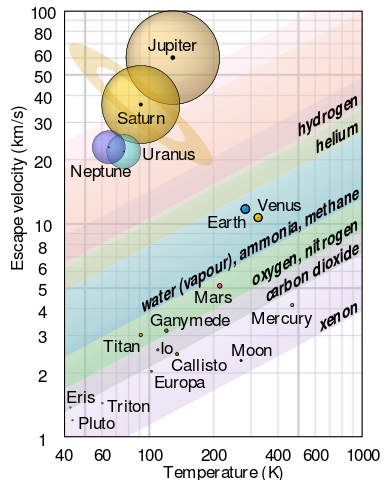 As you can see, water (and ammonia and methane) will not escape from the planet's atmosphere if its size is similar to Earth. Therefore, the evaporation of the oceans will stop once it reaches equilibrium, so we can assume that there's just more water to start with.

Life originating in the oceans would have had a difficult time surviving to land even over millions of years of evolution, since the environments are so different; I cannot go into how or even if it's possible. But organisms will use this temperature difference to thrive: possibly through harnessing the mechanical energy of wave action. Many may still use photosynthesis or chemosynthesis.

There's no way to do this without magic or technology indistinguishable from magic.

It is necessary to assume the planet would be naturally extremely cold and that there is a constant source of heat maintaining the hot oceans. Possibly the planet is a long way from its primary star, so it very cold.

While the oceans are hot, their thermal mass might not be too great especially if the oceans were shallow. The transfer of heat from the oceans to the land will keep the average land temperature in the 14 degrees C range.

If the shores of the landmasses are hot, which is reasonable to expect, then their interiors will be extremely cold. This suggests almost tropical coastlines, sweltering hot and humid, and effectively polar hinterlands with extremely subzero temperatures and covered in ice and snow.

The oceans could be heated by massive lava outflows like the Deccan Traps here on Earth. But this would need to be sustained for geologically long periods of time, for example, hundreds of millions of years to make life possible on the landmasses. This is reasonably feasible, although it's not possible to say how probable this might be but conceptually it makes sense.

Outside of the very obvious relation between atmospheric temperature and ocean temperatures...if this was somehow feasible you'd hit some really odd issues pretty quickly. Life evolved from the oceans for starters...so any life on this planet would have to have evolved in 90 degree water. Not sure how well life adapts to being boiled, but you'd likely have a very different set of creatures on this planet.

Weather. Weather in short form is the redistribution of energy over the planet. Which means weather is going to redistribute this heat across the globe regardless. More extreme features such as hurricanes fuel themselves off the high surface temperatures of a body of water and usually kill themselves by churning up cold water from deep down. You'd get a hurricane the size of an ocean here pretty readily.

Water - water forms an equilibrium with the air and transitions to gas. Hot water means more steam in the air and ultimately a lot more clouds. Very unlikely that the sun would ever be seen at the surface through the cloud cover you'd get here. If the air was somehow kept this much cooler than the rest of the planet, you would also have dense thick fog as the warm moist air (okay, hot moist air) from the oceans hit the cold air.

If you've heard the term 'snowball earth' before, this would be the steamball earth...unfortunately describing the planet as 'earth like' isn't reasonable with this change.

It is possible to have your planet by the help of peltigea. There are devices called Peltier effect devices which generate energy from the heat difference on their sides. This device draws the heat from the hot side and converts it into energy.

Now assume that your world has very active volcanoes under the sea. Normally the heat produced by them will escape to the atmosphere. However in your world an algea like creature with the same capability as Peltier effect device is evolved. These creatures would, over a million years, cause oceans to heat up, while not letting any heat to radiate to air. Obviously paltigea will cover up your oceans like a thin, invisible blanket.

These creatures will process carbondioxide to oxygen and will provide food to the land devellers. I think sapient creatures will be favored on such a world as you will need tools to harvest paltigea.

Peltier effect devices work by preventing heat exchange, instead of the exchange, they drain some of the heat and converts it to electricity. They are very good heat insulators. As the temperature difference increase, their effectiveness increase as well. So these, creatures could evolve to create pockets around the vents, preventing heat to escape from the vents. Then with this ever increasing energy source, they grow to cover more area. In time, they cover the entirety of the oceans preventing heat to dissipate from them. Obviously some heat would be drained by these creatures, but there will be an equilibrium between sea temperature and these creatures. So at some point, which is 80 degrees to fit to the question, paltigea covering the entire surface of the ocean can drain all the heat that the vents can produce, staying in equilibrium. These creatures will use the energy gained to split carbon dioxide as plant do. They will of course radiate heat and heat up atmosphere but this doesn't mean that equilibrium cannot be at the said temperatures.

One final note, a similar process is already on going under hot vents in oceans. Not exactly the same mechanism, but similar. This process is called chemosynthesis.

A planet like this would be very close to the thermal runaway which happens when cloud cover reaches 100% and water vapour acting as a greenhouse gas turns the planet into a "cool Venus" with a thick steam atmosphere and no liquid water on the surface. This is the ultimate fate of Earth as the sun ages and gets hotter.

Let's just speculate that some quirk of biogenesis gave this planet a biochemistry that works right up to 100C rather than suffering denatured proteins at much lower temperatures. Then with a bit of handwavium you could have humanoid aliens realizing that they have not very much time at all to relocate to another planet, before they all get boiled. Unlikely, yes. Impossible? Maybe not.

Assuming the rest of the planet is Earth-like, if all the landmass was 1km tall spires and/or plateaus, the oceans could in fact stay that much hotter than the surface.

The temperature of the oceans could be used to explain the formation of the structures. Waters that hot could form a very sturdy mineral walls on the coasts allowing volcanic activity to build them up to those extreme heights.

Not the answer you're looking for? Browse other questions tagged reality-check earth-like climate or ask your own question.