There once existed a bird of massive size, aptly named the Elephant bird. 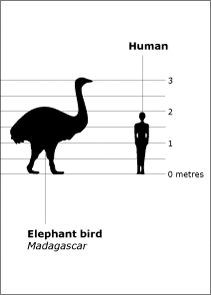 Over the course of history humanity rode several kinds of animals to war: horses being by a wide margin the most common. However, no large birds were ridden by ancient people.

The still-living example of elephants birds, the ostrich, can run at speeds of up to 70 kph. A horse can travel only 48 kph. Thus, it is safe to assume that an elephant bird would also be faster. What's more, an ostrich's kick has been known to be able to kill a lion - and the ostrich is the smaller, weaker version of the Elephant Bird.

Modern people have proved that ostrich riding is possible. So I was wondering, could Elephant Birds be domesticated and/or trained? If so, would they be feasible as warmounts?

I think yes...but a few considerations. I'd almost refer to an old answer about using buffalo as heavy cavalry, I'll link that after the post.

First to consider is the relationship with man that birds have compared to horses. Somewhere along the way in the domesticated horse, a relationship with humans became core to it...they seek us and our companionship. This makes riding them (even untrained) a much easier prospect. Ostriches...I've dealt with domesticated birds before and even then they are flighty creatures at best. But lets say whatever people this is has domesticated the ostrich to the point of the horse just to overcome that. I also have this feeling that they aren't exactly bright animals and are just as likely to start feeding on the ground as they are to take a command from something riding it.

Ostriches are ultimately birds and have a different skeletal make-up that we do. Even a full grown Ostrich is lucky to hit 120 kilo's...compared to a horse, this is exceedingly light. This does limit the effectiveness of the ostrich mounted unit...part of why a cavalry charge is so effective is you are throwing the weight of a 300kg + horse at the weight of a human...this isn't quite so in the ostrich case. So as far as using these as head on charging troops, I think you are pretty limited.

Ostriches are also quite a bit more fragile than a horse...the long neck is a target just waiting to be hit by whatever these troops are fighting. Birds bones are a little more fragile as well, so I doubt this ostrich could really take a hit if and when it happened.

But that isn't the question...question was regarding light cavalry. Light cav are primarily used for chasing down routing opponents and hitting ranged troops (such as archers) as quickly as possible. From that standpoint, it seems these could work.

However, I suspect the best use of these would be to combine the Mongols golden horde technique with the Ostrich...bird mounted archers. They never fully engage troops (gets around the fragile and flighty/spooked portion) and use their mobility to avoid direct combat. Assuming they are as fast as the questions states and can take orders from a rider (remember the rider needs both hands for the bow), they could actually be quite effective. Even more-so if the opponents light cavalry couldn't chase them down.

Is it plausible as a mount? Yes. It's already been pointed out that ostriches are viable mounts, and there are even ostrich races.

However, it's irresponsible to assume or assert that the elephant bird would be faster than a horse. I have seen no indication we know how fast they were, so I can only point out what is comparatively true.

The more mass, the more energy it takes to move. This would mean that, like the elephant, it could be faster than humans, but won't win a race with a horse. It takes more 'horse power' to make a larger beast move, and more energy to sustain it.

Not to mention we know little about these creatures. Would they take to (semi-)domestication? Would they be worth the effort to encourage us to continue trying? Would they need more care and sustenance than horses and/or elephants and/or ostriches? In other words, is it worth the investment? Would their top sprinting speed be worth it? Would they be trainable enough to selectively breed them for endurance, a would be needed in a war mount?

Arguably, any creature large enough to support the weight of a ride (in armour) is a viable war-time mount. All it takes is time to selectively breed them for the most describable traits, and training them to be able to handle the strain and stress of it battle.

So the question, really, is what animal is worth the investment to you? 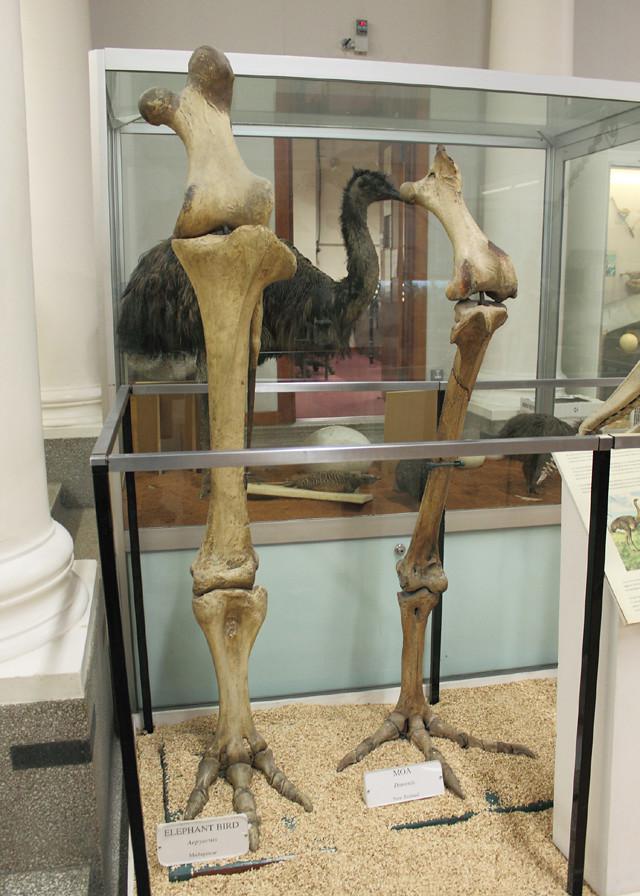 This is an elephant bird leg, with an ostrich to the right for comparison. Elephant bird legs are thick. They definitely weren't as fast as ostriches, overall they seem to have had a lot of endurance but weren't very fast. They might work better as draft horse analogues (and horses in war were often used to haul cannons and artillery), and might even be useable for heavy cavalry in that case.

There is a potentially bigger problem. Elephant birds have terrible eyesight, and were likely nocturnal. I wouldn't be surprised if this finding is modified in the future (their eyes seem to be decently-sized), but for now it seems they were likely primarily active at night. This might make them bad war mounts because they can't see where they are going in the daytime (alternatively, it might make them better war mounts because they are less likely to get spooked by motion).

Ancient Malagasy people used elephant bird eggs (and even used fossilized ones) as pots and storage devices, which provies a good initial impetus for domestication and keeping them around, and they would make good pack animals if nothing else. So it's possible they could be domesticated as long as there isn't some as-yet undiscovered behavior that makes them unsuitable for domestication.

As a bonus, there is a giant extinct elephant bird-sized maybe-ostrich relative from Eurasia that does seem to have been a fast runner based on its limb bones.

Not the answer you're looking for? Browse other questions tagged reality-check warfare fauna domestication or ask your own question.

22
What advantages would bovines have over horses when used as cavalry?

155
Would a bear cavalry be feasible?
4
What animals lend themselves to being ridden by Quadrupeds?
5
Practical concerns of traveling with terror birds as mounts
2
The Domesticated Elephant
11
How can infantry and light cavalry defeat heavy cavalry in a valley?
8
Rams for cavalry mounts
4
What Sea Creatures Would Make Good Undersea Cavalry?
44
Would a horse be sufficient buffer to prevent injury when falling from a great height?
11
Utility of a domesticated dwarf elephant
3
Could Bronze-Age Nomads Effectively Utilize Chariots for Warfare?