What type of celestial body could pierce an Earth like planet without loss of trajectory or minimal loss of speed?

What type of extraterrestrial body could successfully pierce through one side of an Earth-like planet, go through all strata, through the core, and then continuing through the strata and through the other side of said planet, then continuing into space, all while maintaining its trajectory and speed?

What would the size, composition, angle of penetration and velocity of said extraterrestrial body need to be for this happen? What type of damage would be seen on the planetary body that was impacted in this manner? And would said impact, penetrating the entire planetary body, have any long term effects such as gravity, quakes, or other phenomenon plague the planet, possibly causing it long term survivability, or even destabilization in the future.

*This is my first question to the site.

That's simple - a black hole with a mass in the 1 sol range or less. Nothing else will do.

The mass of the black hole is so great that any mass it absorbs in passing through the Earth will not slow it down.

The radius (or at least the event horizon) of a 1-sol black hole is about 3 km, and for a 0.1 sol BH it's about 300 meters. In either case, a naïve interpretation of such a body passing through the Earth is that it simply makes a cookie-cutter hole which will fill in after the passage. I suspect that a 300 meter hole would provide pretty good earthquakes but not global catastrophe. For instance, Project Gnome detonated a nuke underground and produced a 50-meter diameter cavity without major seismic results. A tunnel all the way through the earth is admittedly on a rather different scale, but at least at the crust I suspect it would not cause major distortions.

And you can consider even smaller black holes, since they are so massive that they won't slow down. And since the Schwarzchild radius goes as the mass of the hole, the size of the plug of mass absorbed during penetration remains at the same proportion, so the change in velocity remains the same for different sizes. For the naïve analysis.

Other, more mundane objects, simply will not penetrate a body like the earth. I know you can find YouTubes of guys throwing needles through plate glass, leaving only a small hole, but it doesn't work like that at large scales of size and velocity. Small and fast will do just as much damage as big and slow, and the depth of the crater won't even change all that much. It's energy that counts.

There is no known material that can penetrate 12 000 km of planet and not be destroyed in the process, even less so while maintaining its velocity (which would be a physical impossibility).

Ok, so neutrinos can, but I hardly think that was what you had in mind.

Black holes are the obvious candidates. See other answers. Micro-BH's could be mistaken of a massive impactors striking the Earth, but there always be two impactor events on opposite sides of the Earth. Which is, if you think about it, a dead giveaway.

A small piece of cosmic string would also qualify. It has to be small, because larger pieces could have the mass of a galaxy. Cosmic string being in nature of massive defect in spacetime would penetrate the Earth as if it wasn't there. The bigger the piece of (small) cosmic string was the more catastrophic its effects.

With both BH's and cosmic string penetrations there could be powerful transient gravitational effects. With micro-BH's this wouldn't be noticable, but once the BH was an appreciable fraction of Earth mass then a sudden surge in surface gravity could be felt. Although this effect might be masked by the accompanying massive surge in seismic activity. Basically there would be one heck of an earthquake -- globally. Cosmic strings have more mass per unit length than anything else in the universe, so expect sudden transient gravitational surges.

Effectively with either BH's or cosmic strings there would be double impactor events. This could range from a simple meteor fall to a Tunguska event and upwards. The Earth would ring like a bell. There would be accompanying earthquakes.

There are a number of possible explanations for dark matter. However, it does seem like dark matter could pass through the Earth as if it wasn't here. While this does depend on the precise nature of the version of the dark matter; mostly there does appear to be a complete lack of a coupling constant between dark matter and ordinary matter. This, of course, does mean that it would no effect whatsoever on our planet. And thank goodness for that!

Apart from these candidates for Earth penetrating celestial objects, there are, as Michael Karnerfors pointed out, neutrinos. They pass through the Earth without making any significant effect. There are neutrinos passing through all our bodies every moment of the day. One of those strange quirks of physical nature.

Beyond black holes a slug of neutronium travelling at a high fraction of c should pass through the earth with little disruption. This assumes there is some artificial means of keeping the neutronium at neutron star density.

Quark matter strangelets are another candidate, assuming they generally repel matter rather than catalytically convert matter into other strangelets. There is some controversial evidence that such events have taken place, based on the analysis of global seismic networks. In 1993, two separate events were recorded which could be interpreted as quark matter passing through the earth. 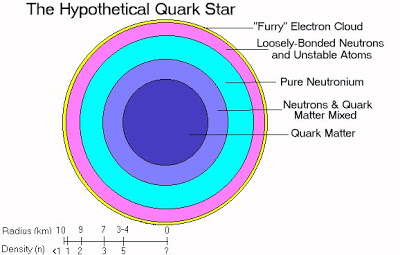 Since it is thought that quark matter might be created in the formation of neutron stars (the stable quark matter hypothesis), the universe might be full of the stuff, and any event with enough energy to disintegrate a neutron star or peel off a substantial chunk will accelerate the piece to a high fraction of c. At that velocity, tiny particles of quark matter will not even be slowed down when striking a normal matter planet.

A black hole could probably do that. They come in all sizes from micro black holes to much bigger than my brain can cope with.

A microscopic black hole wold have no appreciable effect, but you can grow it to a size that has whatever effect you want to achieve, up to absorbing the whole solar system.

Not the answer you're looking for? Browse other questions tagged reality-check space physics earth meteor .

3
Could we unintentionally induce a positive or negative charge on an entire planet?
9
Exoplanetary Review: Rock Storms
5
Machina Plague: Spread
3
Machina Plague: Quarantine
2
Machina Plague: Cure
16
What impact is required for a visible (from Earth) ejecta plume on Earth's Moon, and would the Moon survive?
12
Delta-v budgets and modified gravity
3
How close could a creature longer than Jupiter get to Earth without destroying it?