I need to know what would be the orbital period (so, how long would last a year/day) of an Earth-like planet tidally-locked to a red dwarf.

The star is at the upper limit of the red dwarfs (so, around 0.4 solar masses) and the Earth-like planet could be at the outer edge of the Goldilocks zone (but must be tidally-locked). I'm trying to get the upper values for this one.

I know there's an equation that calculates this but I'm not good with that.

As far as I can tell, the habitable zone around a red dwarf is less than .5 AU, and is going to be very narrow.

The exo-planet Gliese 581 g is right in the middle of the habitable zone of the star Gliese 581, and its orbital period is 32 days. If you push it slightly further out its orbit would be a little longer, maybe 40–50 days?

Edit: according to this article, the habitable zone of red dwarfs can possibly be extended 10%–30% further than was previously believed under the right conditions.

On Gliese 581 g, the day side is probably a dry desert, and the night side is probably a frozen waste (though it might not be cold to the extreme since the atmosphere would carry the heat of the day around to the night), but it's possible that it could have liquid water at the terminators, and so life could exist in the Twilight Zone.

Lacaille 8760 is on the larger size a .6M and the habitable zone would be .3 AU.
According to the planetary orbit calculator, a habitable planet in that system would have a year of around 77 days.

There's a fun Circumstellar Habitable Zone Simulator that you can play around with that may help you out.

I like to use Kasting et al. (1993) when talking about better climate models of planets around main sequence stars, as it evaluates habitable zones in while taking into account atmospheric effects. Anyway, the authors address your specific question, calculating the tidal locking radius $r_{\tau}$ after a time $t$ for a planet described by a dissipation function $Q$ with an original rotational period of $P_0$ orbiting a star of mass $M$: $$r_{\tau}=0.027\left(\frac{P_0t}{Q}\right)^{\frac{1}{6}}M^{\frac{1}{3}}$$ They use the values, for a somewhat Earth-like planet, of

Here's their diagram, with your point located; it corresponds to an orbital radius of about 0.2 AU: 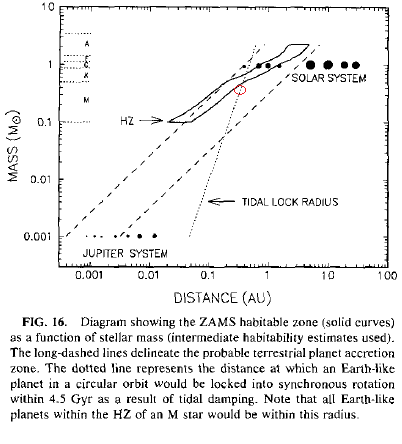 This is, unfortunately, not in the zero-age main sequence (ZAMS) habitable zone. Try making the star more massive, about 0.5 solar masses. Then the planet can be tidally locked and in the habitable zone (though not necessarily habitable).

Not the answer you're looking for? Browse other questions tagged science-based astronomy orbital-mechanics or ask your own question.

6
Under what conditions might a planet orbiting a red dwarf star NOT be tidally locked?