What would the effect be on Earth if Mars disappeared?

What would the effect on Earth be if Mars, in the space of one second, disappeared from the Solar System? Just simply was gone, leaving no residue, and leaving the space where it had been like it had never existed.

Would it have any effect on Earth at all?

Mass panic and fears of the apocalypse

Physically? Nothing. There would be no readily discernable physical effect on the Earth or us, its inhabitants.

Emotionally and psychologically though, that is a whole 'nother story. It would cause a tremendous uproar. A magic event of astonishing proportions has taken place. As other answerers have pointed out: the event would violate the laws of physics as we know them. Only something supernatural / magical can make it happen. This would frighten people, because our sense of security and safety rests on the foundation that we can predict what happens next, which is the very purpose of discerning the laws of physics in the first place. As long as the laws of physics operate as we are used to, then we feel fairly safe and comfortable in our understanding of the great and scary place that is the universe.

But with this monumental event, all that feeling of safety is out the window. What is to say that our planet is not the next one?! "Mass panic" would probably not even begin to describe the mood. People would start fearing the apocalypse is at hand.

Without Mars there would be many fewer impacts of asteroids on Earth. I mentioned this in a comment but I think it's worth its own answer.

The reason is the following. Near-Earth asteroids -- asteroids whose orbits cross Earth's -- are the population of asteroids that can bash into Earth. They don't survive for too long, only a million years or so on average, because their orbits are not stable for the long term. So, where do they come from? Well, asteroids in the main asteroid belt (between 2.1 and 3.2 AU) are somehow pushed onto an unstable orbit, typically an orbital resonance with Jupiter or Saturn, like the 3:1 resonance with Jupiter (where the asteroid makes 3 orbits around the Sun for every 1 of Jupiter's). These locations are called the "Kirkwood gaps" and are systematically devoid of asteroids: 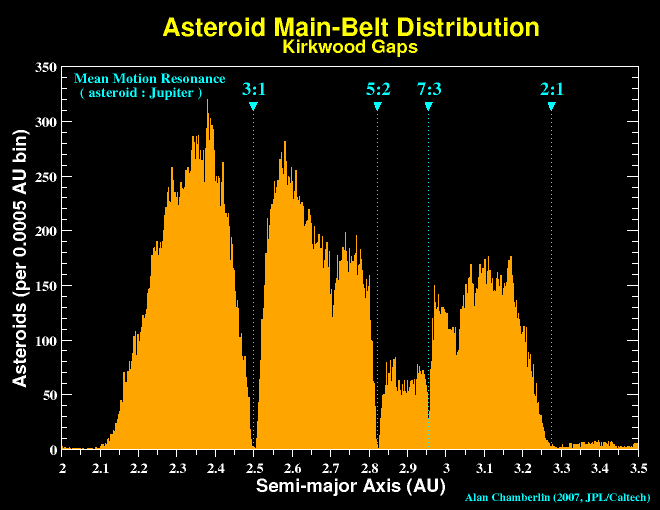 On its way in to become a near-Earth object, the asteroid typically has its orbit stretched out (i.e., its orbit becomes much more "eccentric"). This causes the body's orbit to cross the orbit of Mars, and eventually the asteroid is usually kicked inward by Mars (whose orbital distance is 1.5 AU).

If Mars disappeared, then would asteroids still be able to move inward from the main belt to cross Earth's orbit? Yes, but with a far lower efficiency. Because as an asteroid's orbit gets stretched out, its closest approach to the Sun becomes smaller (and therefore closer to Earth) but its farthest approach becomes farther (and therefore closer to Jupiter). If the asteroid's orbit crosses Jupiter's it will be kicked out of the Solar System quickly.

Without Mars as a conveyor belt toward Earth, many fewer asteroids would be able to cross Earht's orbit and therefore hit us. So, the impact rate on Earth would be much lower.

Of course, the story would change if Mars' orbit were instead populated by a swarm of asteroids...

Earth's orbit would not be affected significantly by Mars' disappearance. However, a similar thought experiment would turn out quite differerently. If Earth disappeared, Venus' orbit would become unstable, and Venus would either fall into the Sun or perhaps collide with Mercury (a collision with Mars is unlikely). This is because Venus' orbit is located at an unstable "secular resonance" with Jupiter, where Venus' orbit should precess at the same rate as Jupiter's. This would cause Venus' orbit to become extremely stretched out (i.e., its orbital eccentricity would increase drastically). Grvitational kicks from Earth actually prevent Venus from falling into this resonance (called the nu_5 fyi). But if Earth disappeared, Venus would enter the resonance, have its orbit stretched out, and probably fall onto the Sun.

The gravitational pull of the Mars on earth is pretty minimal. However, with its absence, the Earth's orbit will be a little (parts in million perhaps) more elliptical. I doubt this would do any real change. Light coming from Mars is negligible, so that can be ignored too.

Only difference it would make is that we wouldn't have a planet that is easy to analyze and have dreams of colonizing it.

To actually answer your question (and not just say that it is pointless because it is impossible):

If Mars disappeared right now it would not have any affect on Earth whatsoever. You did ask the question in the context of "if Mars had never existed". Mars' gravitational pull in the Solar System is negligible to Earth's existence. Both of Mars' moons are captured asteroids, so if you are implying that they would still exist and not disappear as well --- their orbit would change but I do not know the mathematical calculations to determine where they would go. It would depend on where they were when Mars disappeared. Mars does not block asteroids from hitting Earth, so there would not be an increase of impacts on Earth if Mars disappeared (explanation below). Though the person who discussed the Kirkwood Gaps --- nice! Not many people know about those.

The only thing you would need to assess about Mars' non-existence is how it would alter the human component. Mars is an integral piece of human history and has an important role in almost every culture on Earth (probably every culture but I cannot speak with specifics). That would be the only thing affected.

Not the answer you're looking for? Browse other questions tagged space physics astronomy mars .

20
How would other planets in a solar system be affected by the disappearance of one planet?
8
How would the sudden destruction of Mars affect Earth?

4
How could a sentient life form move an exoplanet the mass of the Earth?
3
How long would it take us to detect a Deimos-like object moving towards Sol from Alpha Centauri
0
Pop goes the planets!
20
How would other planets in a solar system be affected by the disappearance of one planet?
5
How strong would John Carter really be on Mars?
11
How do I increase air pressure for the planet Mars?
12
If I were to put a moon-mass object in Mars orbit, how long would it take to restart the dynamo effect in Mars' core?
10
What would've had to change in the early solar system for Mars to remain habitable?
3
Assuming that the environment of Earth and Mars are similar, is there possible trading between Earth and Mars in current technology?