What are some tips for designing symbols for a constructed language?

Constructed languages are the life blood of imaginary cultures. If a culture speaks an earthly language, how can we be expected to believe that we are in a different culture? While every detail is important, one that is often ignored is symbols.

Many people that construct languages tend to think that as long as the lexicon and grammar are well made, then the symbols do not matter.

What are some tips for designing good symbols for a constructed language writing system?

You may find that when you start designing characters for your language, they feel somewhat contrived. In order to avoid creating a writing system that doesn't fit the language, you first need to define some aspects of your language:

If you gave us more detail about your language in general, we may be able to provide more tailored advice.

EDIT: It may be worth noting that a language can be alphabetic in general but incorporate a handful of logographs to represent very common words. For example, let's imagine a futuristic flavor of English in which the plebes tire of writing "you're" — it's a whole six characters after all! In that event, we may adopt a character that isn't part of our alphabet and has no English phonetic value (perhaps µ) for the sole purpose of representing "you're". Consider adding logographs as mix-ins of this sort to spice up the writing system.

I envision the high school students of this parallel universe avoiding logographs like the plague in the interest of reaching their page requirements :)

In addition to the excellent points raised by Alex Clough, remember also that writing systems, just like spoken language, evolve over time.

For instance, consider a language that was originally logographic as it began to become a written language. Over time, as the language expands to incorporate more objects and -- much worse for logography -- abstract ideas, as well as begins to form a grammar to convey not only those ideas but the relationships between them, the writing systems will begin to evolve to correspond. The end result could very well be an alphabet based on an ancient logography.

Take the word "eye" in English. In a hypothetical ancient logographic version of English, "eye" would of course be represented by a drawing of an eye, which over time could have become simplified to look something like this: 𐍈. As the language later begins to evolve into one that is more alphabetic, common logographs could be drafted to serve as the new letters, specifically those that they start with: The '𐍈' logograph becomes the letter '𐍈', the first letter in the word "eye". Combined with the letter 'Y' -- itself a simplification of the logograph for a yak -- the word "eye" in this hypothetical version of written English is "𐍈Y𐍈". (NB: In this example, further simplification could result in the letter '𐍈' becoming the letter 'o', resulting in "oYo"; don't fret if you occasionally have a letter that looks like one from our own alphabet -- simple shapes, such as circles, just make sense to be commonplace elsewhere.)

Also consider the writing methods in use at the time in your conlang's history when it was first being written down: A brush and ink could result in sweeping arcs and stylistic calligraphy, whereas chiseling into stone tablets would more likely result in straight lines and stiff characters.

You can use a process like this to come up with histories for each of the letters in your alphabet, or symbols in your syllabary. Or, you can ignore all of this and just create something that you think "looks good": Nobody knows why the letters we use are like they are, and even the ordering of our alphabet (excepting some later additions at the end) is a complete mystery. You can always produce different letters from a single basic shape by using rotations and flips (dbpq), repetition (vw, nmg), small additions (OQ, rn) or subtractions (bh, EF), or minor tweaks (kx), any or all of which can help to unify the "style" of your alphabet. You can also follow the examples of ancient languages from our own history, such as simply omitting vowels from your alphabet like the ancient Phoenicians, which can help to make your written language stand apart from one that's simply a shuffled boggle of our own. There's no hard-and-fast rules for doing this, just ideas for how to get there on your own; I've been spending a lot of time myself working on my own conlang, including a unique writing system for it, so this is the culmination of what I've found for myself over the past year (off and on) .

Alphabetic symbols (as opposed to syllablies or ideographs) should be simple and maximally distinct from each other. I've thought of this before, and it’s actually quite challenging to come up with something that’s not an actual letter in some writing system already! Look through the Unicode tables.

Look at what can be done in a small box with a few strokes. You can make lines or curves between roughly defined regions within the box. How these intersect or how the endpoints relate to other featues becomes a recognisable aspect. Strokes can be straight, curved, recurved, etc. But evolution will tend to keeping them simple.

You might dream up some ornate symbols, but an ancient accountant or merchant would not make such beautiful and precice letters when doing real work. Strokes that are fast and easy (thus minimal) and easy to tell apart when written quickly will be what gets taught to the new guy.

One other thing to consider is handwriting (or whatever your species uses in place of hands). For example, compare this 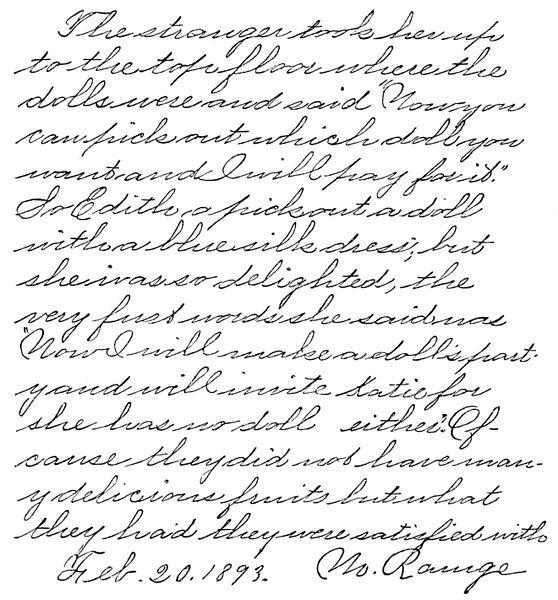 with the same text as you would read it in a book or on this web site. Generally handwriting will tend to link the letters (so that you can write it in one continuous movement), and even modify them in order to easier write them in a linked fashion.

First, think of how your culture is writing. The writing material and the kind of writing tools matter a lot; the specific shape of runes (no horizontal strokes) is explained be the fact that those characters are scored in wood; lines parallel to the texture of the wood disappear.

Practice with the writing material and tools, and devise some working character shapes. This is the creative part to enjoy.

For the systematic form of a script, take inspiration from the existing writing systems of the world: The are purely consonantic scripts, full alphabets, sylabaries, and ideographic scripts, also look on the writing systems that Tolkien invented.

I'd recommend taking a list of the possible sounds in the International Phonetic Alphabet. From there, think which sounds are used for this alien race, since only those will have a written representation. Maybe if some sound happens sometimes but is very rare, or was introduced way after the creation of the writing, it could be represented with small symbols added to a similar letter (like we do now: ç, ä, ê, etc.)

Now that you have the sounds that will require a letter, I'd recommend checking on how the sound is categorized depending how we pronounce them, and use that for creating the letters.

Also, for some consonants you might use a symbol representing where that sound comes from. I'm pretty sure the origin of 'S' is not that is the sound a snake does (and S can resemble a snake) but that could be the origin in your language.

Not the answer you're looking for? Browse other questions tagged language worldbuilding-process conlang or ask your own question.

10
Does anyone have any good strategies for making glyphs?

81
Are there techniques for creating alien or foreign sounding names?
14
How to name places that have multiple names?
8
How to speak with someone whose language drifted from your own
12
What are some steps / guidelines for making a constructed language?
7
Social engineering: Design a new language for a totalitarian state obsessed with scientific advancement
4
Word lists for constructed languages
5
Mixed language or creole?
8
Are oligosynthetic languages feasible?
7
What Kind Of Operators or Functions Should A Magic Language Have?
44
How to avoid the language barrier when there is no time to learn the other language?