Can you destroy a planet by poking a hole in it?

Imagine you are an evil humanoid alien that wants to destroy Earth (or something awfully similar) for whatever reason. However as an alien, you do not possess any physical weapons. No laser guns. No bombs. Nothing. However you have an advantage. You are an unstoppable and invincible object. No one can slow your movement down and you cannot be killed nor have someone forcefully take you apart or even move the joints of your body (but you can move your own joints).

Now the alien wants to destroy the planet by going through it, through the core and back to the other side (it can be multiple times). However he does not plan to move it out of orbit before it hopefully 'explodes', which will most likely collide with other planets. The exception is if the planet shatters into many pieces around where the planet would normally orbit around its sun and then its remnants hits other planets, it would be fine.

By going through the planet, is it plausible for it to shatter into many pieces? What would actually happen? Especially if you went through it back and forth many times and a high speed.

I imagine that it would have to be pretty violent to prevent its own gravity pulling it back together. What are the limitations and restrictions? Additionally, if possible but not essential, as you begin the destruction of the planet, time should be allowed for people to lift rockets and space planes/ships off before the earth actually falls apart.

Could the alien start going through the planet slowly, and then do it again multiple times faster each time to produce this specific outcome? 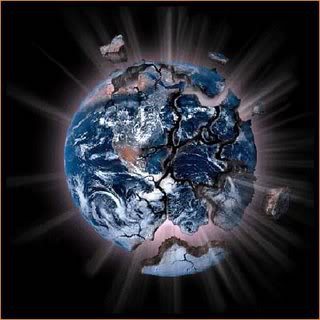 Ok so by the looks of it, a small human sized humanoid alien cannot shatter a planet. Would it still destroy the earth's crust if it went through the planet back and forth?

Science-based and "cannot be stopped by anything" don't go together. Having said that, a lot depends on your humanoid villain's ability to accelerate.

If he (it?) was a more absolute version of that Juggernaut guy from the X-Men, he won't be doing any serious damage to the planet. Make a crater, sure. But then he'd be moving through soft, even liquid magma. By pushing it aside, he would impart a tiny bit of momentum to the planet, but nothing noticeable. He might cause the same effect "swimming" through the ocean in one direction for a few weeks.

The problem with modeling how much energy and momentum the villain transfers to the planet is that his own momentum is essentially infinite, so it becomes a matter of how much energy the magma can absorb as he pushes it aside, and how much of that will just turn into heat by the way of friction a few meters away from the villain's path. And unfortunately, viscous liquids like magma can absorb a lot of energy...

If the villain hijacked a fighter jet and flew it into the ground at max speed, say mach 3, he'd be acting like a big bullet flying through water. To visualize this, here's a video of a bullet underwater (start at 2:00). You'll notice the bullet creates an awesome shock wave and bubble... which immediately collapses without causing any big splash at the surface. The only differences would be that A) he wouldn't slow down or stop and B) he'd be tiny compared to this bullet in the tank.

To do real damage, he'd have to launch himself at the planet at incredible speeds (with the help of Evil Superman or Evil Flash maybe?) probably at some appreciable fraction of light speed. The sheer power of the impact blast (where solid rock gets vaporized instantly) would probably cause a firestorm big enough to destroy the surface of the world long before the villain can impart enough energy to the planet's insides to blow it up.

Here is an xkcd of interest.

If you want the earth to break apart in chunks, then hitting the earth at 0.99c would tear a hole down into the mantle. That would already have extinguished life on earth, but hit it a few more times at that speed and the shock waves and heat may completely destroy/melt the crust.

If your alien can get up to 0.9999999999999999999999951c (c being the speed of light) then he will hit the earth with a kinetic energy greater than the gravitational binding energy of the earth. So....no more earth. It would be vaporized into an expanding plasma fireball.

The earth is mostly liquid in the first place. Liquids don't lend themselves to blowing apart in chunks. If you keep hitting the earth at high energy, you are going to melt/vaporize more and more of it, but you won't blow it apart unless you are hitting it with more energy than its gravitational binding energy. You might makes some waves, and launch some ejecta that will end up in orbit and spiral down to the earth's new Hadean surface later. So I'm not sure it is possible to get the effect you pictured with actual physics.

What you are trying to do calls not for one object but several. The Earth really doesn't want to crack like that. The mantle and liquid parts of the core simply won't behave that way. They will behave like a liquid. Thus, the part that would crack the way you want would be the crust. However, the crust would typically want to crumble rather than break apart.

The way I'd go about getting an image like that would be to have billions of such unstoppable objects organized in a pattern to act like a cookie cutter on the surface of the Earth along the fault lines you want to see. They all need to slice into the Earth's crust at the same time while a planetoid sized immovable object plows into Earth at a high speed. Id try to use fluid dynamics to push all of the pieces of crust outward evenly so they don't crumble.

Of course, unless you achieve escape velocity (11,186m/s), any piece knocked off this way will simply fall back towards the center of mass of the Earth. There it would most likely get re-melted by the liquid portions. Eventually a new crust would form.

If you're looking to have the Earth truly shatter, you're going to have to find solutions that don't rely on the laws of physics. The shattering effect you are looking for simply doesn't appear on the planet scale.

If you want a small scale model of what is happening which is closer to the physics of what happens on the large scale, instead of thinking of the Earth as a solid rock, think of it like a thin surface of ice on a ball of water, and you want to break it up by moving really slowly. The water reacts to what you are doing, making this difficult.

EDIT: the answer to your question is that you could mess up the crust by going back and forth. However, since only your time spent in the crust would have much of an effect, you might as well just drag the immovable object along the surface, rather than going all the way through the planet.

There's an interesting property of liquid-filled shells (such as a watermelon) where, if you shoot it, the liquid going out the far side causes the base object to jump toward the shooter. Penn and Teller demonstrate this (warning: while they're shooting a watermelon, the context is about JFK getting shot in the head). You'll notice that the watermelon doesn't jump very far.

The real problem here is atmosphere. Between the suction vortex of an object travelling that fast and the explosion of the southern hemisphere, much of the atmosphere would be lost. Then, with the reduced gravity of the remaining pieces, more atmosphere would be lost, particularly as what remains "flows" into the cavity left from the exited core. Pockets of atmosphere would probably survive in large basins, but it's likely any survivors have only hours to supply their own breathing air, and not much longer to get off planet before things really go wrong.

A couple of points:

79
The opposite to Worldbuilding: World Destruction

11
What would be the effect of a powerful explosive going off in the core of a planet?
7
Is this shattered planet scenario possible?
77
How can I move a planet?
44
What's the largest body in the solar system that you could destroy without endangering humanity?
14
Creating a scientifically semi-valid super-soldier, part 3: Physical shock resistance
4
How can aliens from a different planet move faster when they're on Earth?
7
Rotation, weight and planet size
5
A Planet Approaching being a tidally locked planet