I have created a world map for a story I'm making. And it has been too long since I studied geography and geology. Assuming earth-like conditions, and a normal distribution of climate based on (approximate) lines of latitude (equator, tropics, arctics), what regions would have unique climates owing to atypical precipitation (very dry or very wet)? I'm assuming that forests are abundant otherwise.

I would most appreciate answers which can be explained in the context of our planet's climates and the underlying processes, so that it's easier to understand and extrapolate from.

Regarding scales: I don't know exactly how high the darkest bits should be, but assume Himalayan equivalents. Additionally the continents are Australian in size. The centre of the map is where the equator will be. Sorry for the lack of precise scale, I'll have to add that a bit later! 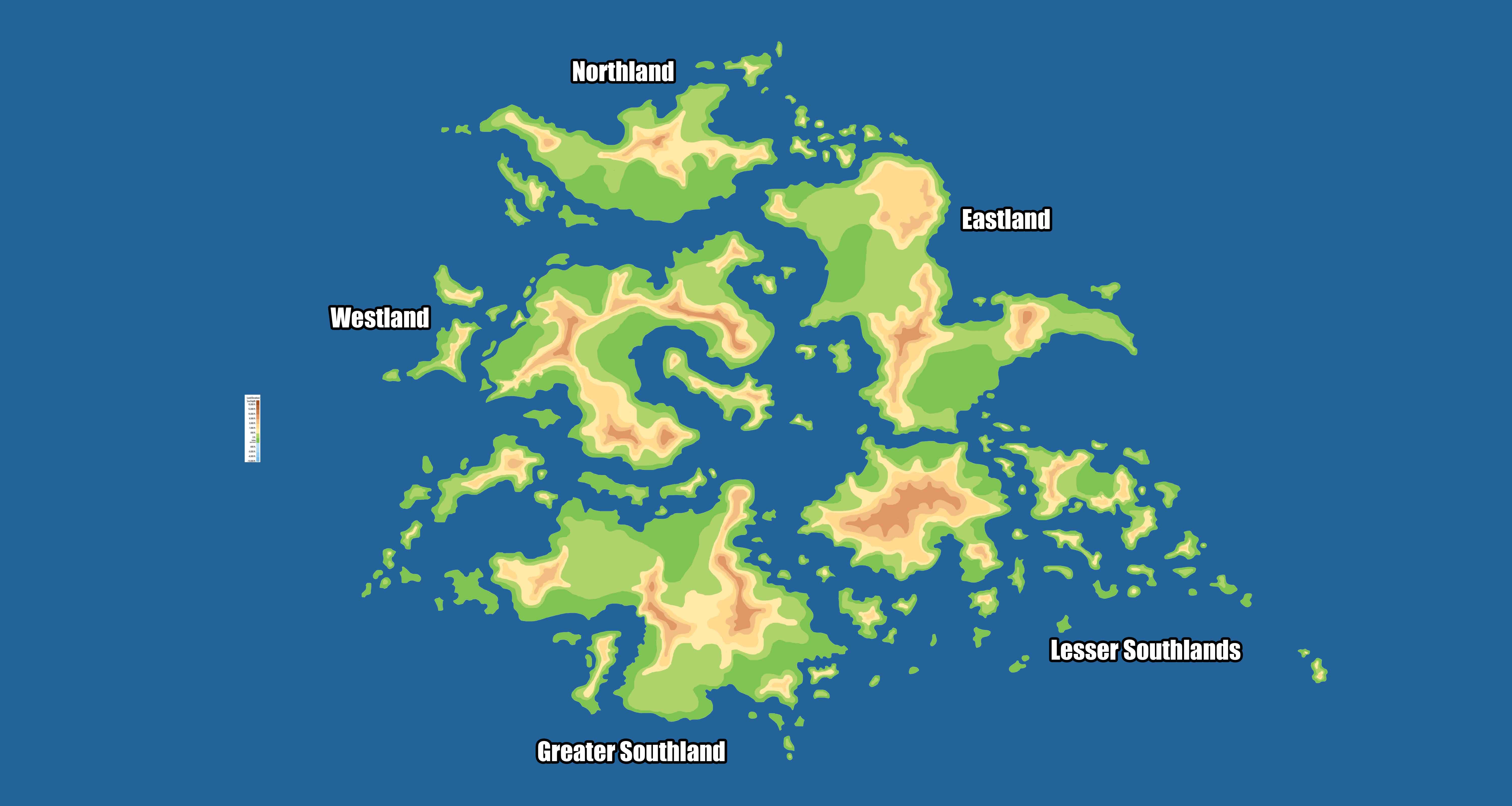 UPDATE: Given Kingledion's answer I have created a climate zone map, attempting to simplify the Koppen climate classifications. 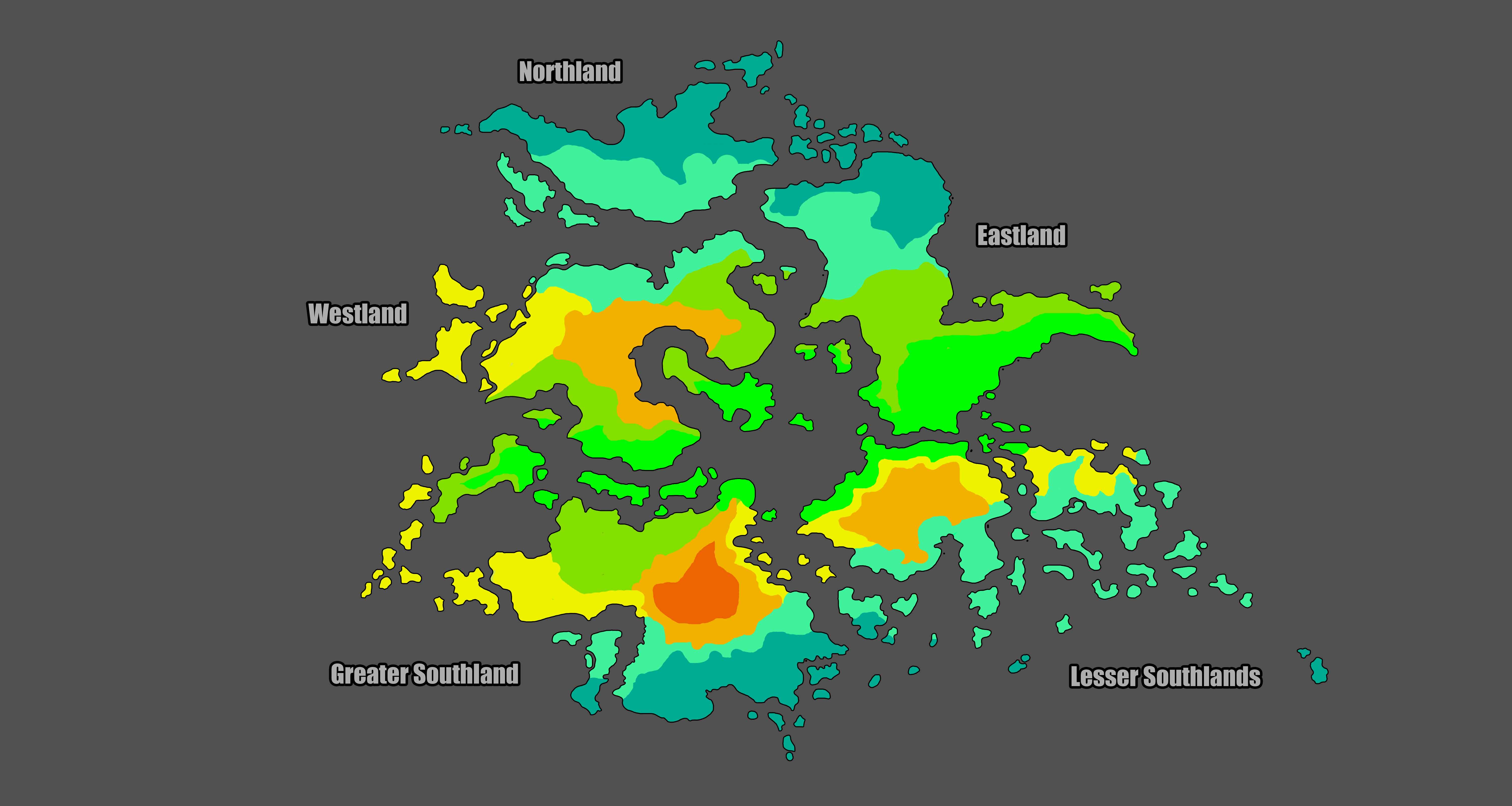 First we have to assume that the planet's spin direction and orbital tilt are the same as Earth's. I would not assume Himalayan heights...the Himalayas are abnormally tall for mountains on earth, caused by a massive high speed plate collision that I don't see any evidence for in your map. Most mountain ranges probably topped out in the 4000m-6000m range through earth's history. Lets say your dark region in the Lesser Southlands is a ~4000m plateau surrounded by peaks up to 6000m, like the Altiplano of Peru and Bolivia.

You have a landmass that is completely exposed to the effect on oncoming currents on both coasts, so those currents will probably dominate the climate. The west coast of continents generally sees cold currents from the poles heading towards the equator (such as the California, Peru, Benguela, and Canary currents). The east coast will see warm currents from the equator to the poles (Agulhas, Gulf Stream, Brazil).

The climates that on West Coast go from Rainforest to Cool Desert to Mediterranean to Temperate Rainforest to Arctic. North America, South America, Africa/Europe, and the southern half of Africa all follow this pattern (though South Africa runs out of land in the Med zone).

The Climate son the East coast tend to go Rainforest, Wet/Dry Savannah, Humid Subtropical, Humid Cold-Winter, then Arctic. East Coast of North America is the best example. East Asia follows the patten, but has an additional monsoon bringing heavy summer rains, which I'll get into below. South America mostly follows the pattern, but doesn't have a large landmass to get the polar cold winters, after the Humid Pampas near Buenos Aires, it goes into cold dry Patagonia. Your continent would probably be this version look like this.

Humid air tends to rise at the equator causing rainfall and dry air from high altitudes tends to descend around the tropics and cause reduced rainfall. This is the reason that the equator is blanketed in rainforest, but the tropics tend to go through deserts.

Monsoons are caused by proximity of an ocean to a land mass that will heat up and cool down much faster than the ocean. The three major Monsoon systems of earth are caused by the Sahara Desert (West African Monsoon), Tibetan Plateau (Indian Monsoon) and Siberia (East Asian Monsoon). I don't see anything large enough on your map to cause a true monsoon. Maybe some weak smi-reversing monsoons, as we'll see below.

The North Pole of earth is completely surrounded by land and acts almost like a lake. The South Pole is a continent surrounded by water which is isolated by a strong circumpolar current. Your world has neither feature, so I'm not exactly sure what would happen. I'm going to assume that permanant pack ice never reaches the continents. Winter feature strong, constant, cold south-blowing winds from the poles to 60degrees latitude. Summer features a mild poleward breeze. The poles are over water, not land, so you can't get the frigid air masses that form over Siberia or Canada. Your land masses probably never get down to -20F. A comparable situation is Trondheim, Norway, on the Arctic circle with no land north of it, the record low is -14.8C.

So... while there is already a fine answer, I used my lunch break to try to figure out "what is with the ocean trenches?".

They are not inserted yet, so I tried to figure out how the continental and ocean plates do look after all... which wasn't as clear as I hoped at the beginning. 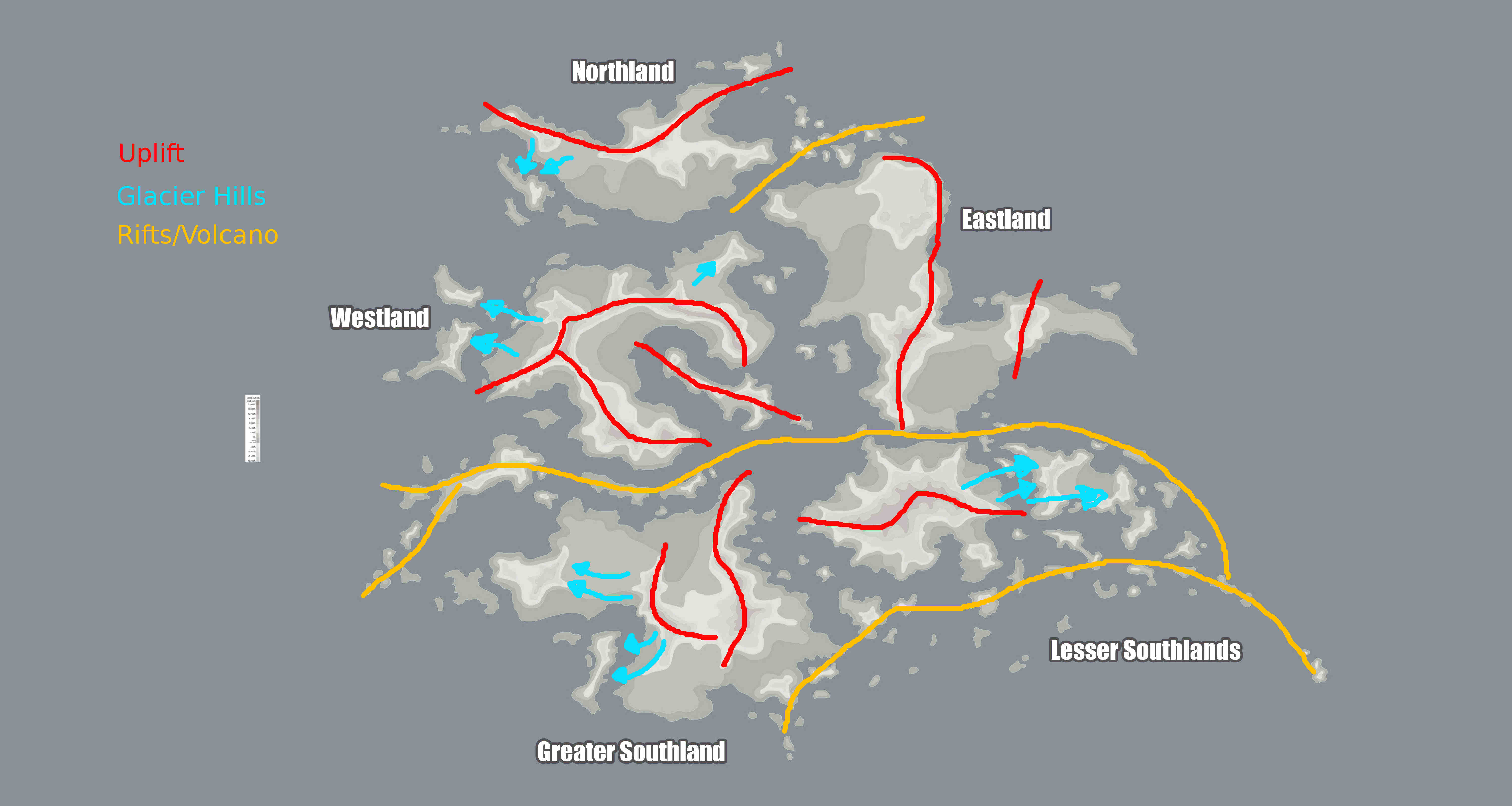 You have mountain ranges which look like they were created by plate uplift, you have hills that might be the result of an ice age glacier action and some might even be volcanoes, which love to pop up at plate rifts.

My picture does look... well... I have no idea how the plates are drifting and so at the moment I can't tell where rifts in the ocean might be after all.

If you extend the orange lines you should find stuff like underwater mountains (volcanoes) OR deep rifts. The read lines are much more likely to result in high places under water, but still... I got the feeling your world rips itself apart at this long rift right in the middle, BUT because there are volcanoes this might mean that the ocean isn't pretty deep after all.

Even more, I think this might be a pangea which was struck by unexplainable hot weather which resulted in an overall rise of water. Which means: Some of the even important parts of the landmasses are hidden below the ocean surface.

So you would end up with swallow water between the continents and more deep water outside the "where the pangea had its beaches" point.

Anyway, you are beyond the point where a restructuring would make sense. When I'm right with my outlining, you will end up with a greater body of water between a northern and southern group of continents, while the mountains might grow and the land start to extent at the water ends of the red lines. In many centuries....

Due to swallow water, not much currents would form between the continents, but if we insert a more deep rift at all orange lines, we might get some east-west currents which will supply water from outside the continent area. You will end up with more wet climante where this happens and more dry climate where no currents pass by. Especially that... phallic island.

At the same time northern Eastland and eastern Northland and northern Lesser Southlands will get more wet climate (warm winters, wet summers).... Aaaand... I think I cannot add very much to kingledions answer after all saldy.

To be honest, the distribution of mountains, islands and water still looks like it wasn't done by tectonic forces but... well... a god who hasn't much experience in making worlds.

But maybe I'm wrong with my interpretation.

While staring at it for some time I think I found a useful tectonic layout... and this is indeed a pangea breaking up. Still the masculin monkey-wrench island is getting kind of... pressure; you will end up with salt lakes or death seas... have a look (its getting more confusing) 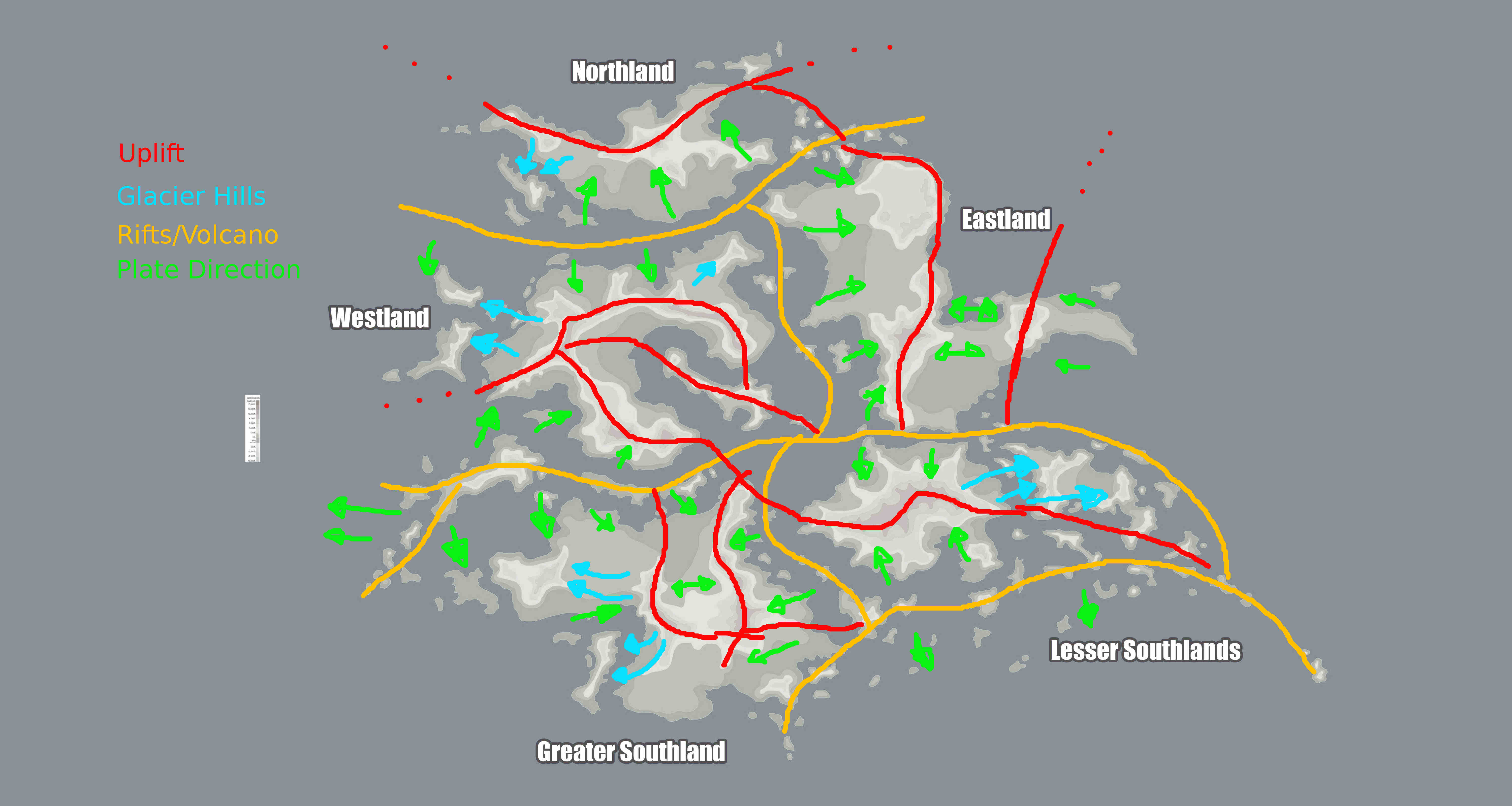 Not the answer you're looking for? Browse other questions tagged climate geography alternate-worlds or ask your own question.

5
How to create a world where birth defects are common and where women are still treated equal to men?
3
Where would deserts form on this world?
25
World where gender roles are swapped
9
In a world where two enormous cities are built one on top of the other, what would weather be like in between?
6
Are the mountains and rivers on this map okay?
2
Does my climate map work?
3
Are the ocean currents and climate zones of my world plausible?
3
Where would rivers and lakes make sense on this continent?