What basic principles should I keep in mind when scaling things up and down?

What general principles should be kept in mind when making things bigger or smaller?

The most basic thing to understand when scaling things is the difference between linear, quadratic, and cubic scaling.

"Twice as big" can mean radically different things depending on what kind of scaling in involved. Increasing the width, height, and length of something by a factor of 2 increases the space it fills by a factor of 8! Conversely, a sphere that fills twice the space will only be about 1.26 the width.

You can make a line twice as long by sticking two copies of it end to end.

You can scale up a square by sticking 4 copies of it together. The lines that make up the edges are twice as long but it covers 4 times the area. 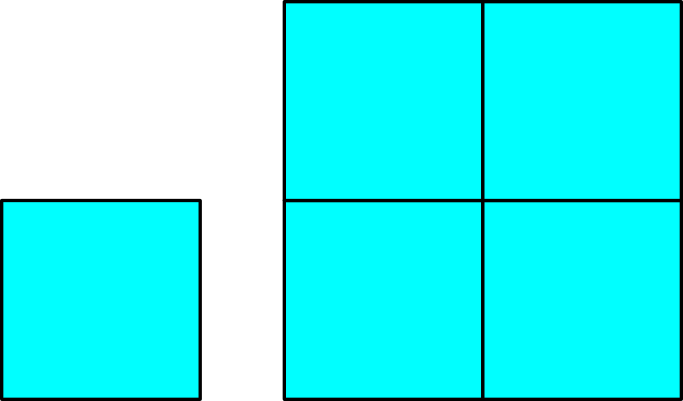 You can scale up a cube by sticking 8 copies of it together. The edges are twice as big. The 6 faces of the cube have each been increased by 4, and so has their sum, the surface area of the cube. The volume of the cube, the area it fills, has increased by 8. 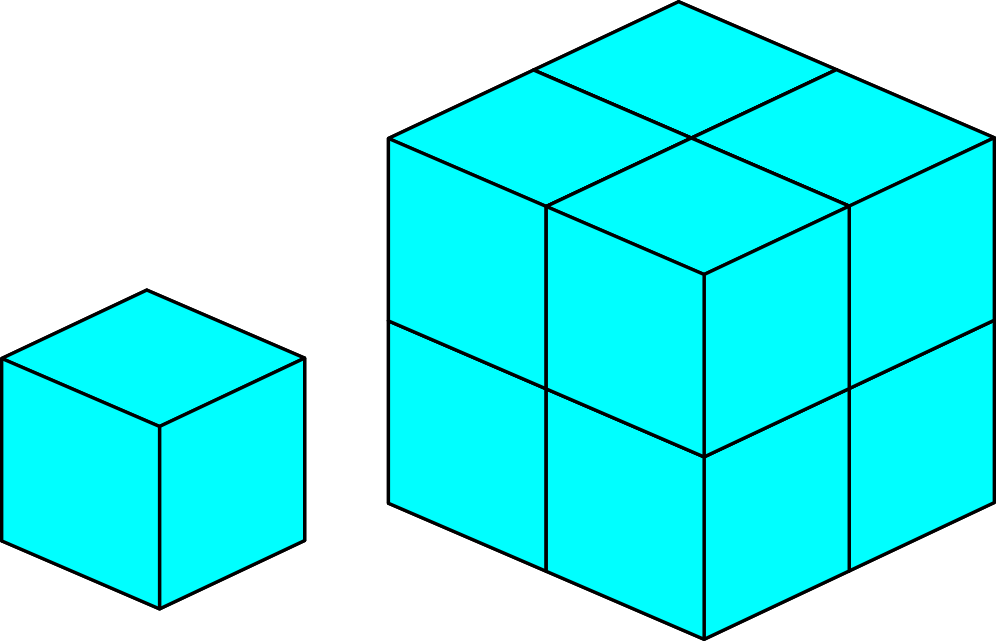 Using simple shapes and whole numbers is just for simplicity. The same relationships hold for any shape and any scale factor, including ones smaller than one (getting smaller rather than bigger).

Surface area (How big is the skin) and cross section (if you cut a slice through it, how big is the slice) scale quadraticaly. You multiple the linear scale by itself to get the quadratic scale factor. These are 2 dimensional quantities.

Volume is three dimensional so you multiply linear scale by itself, and then by itself again to get the cubic scale factor.

This can be done backwards as well. If you know how much bigger or smaller you want the area, then the linear scale is the square root, and if you know the cubic scale, then the linear scale is the cube root. Most calculators can figure out square roots and moderately capable ones can do cube roots. You can ask Google for the "cube root of 4" or Wolfram Alpha for the "cube root of 4" if you don't have a calculator or can't remember how to use the root buttons.

Other properties also scale in these ways, most notably mass and structural strength.

For most purposes, the strength of an object is proportional to the cross sectional area. When transmitting force through an object, you can think of each slice as pushing or pulling on the slice next to it.

This means that when scaling up an object, loads an object from its weight and the forces to move it against its inertia are scaling up faster than its strength. Stronger material can help, which is why you can make a model skyscraper out of cardboard, but a real skyscraper needs to be made out of steel and concrete to support its own weight.

This fundamentally limits the size that something can be. Eventually its own weight will cause it to collapse.

You mention stars and planets:

Planets bigger than stars would have incredibly huge mass and therefore would probably collapse in on themselves due their own gravity and possibly begin the nuclear reactions that would make them stars.

Conversely, a small star may not have enough gravity to hold itself together, it is a continuous nuclear explosion after all. Even if it has enough gravity to resist the force of the nuclear reaction, if it's not big enough it might run out of fuel quite quickly.

74
Can you simply scale up animals?
20
What would be the tallest possible height for humanlike creatures in earthlike conditions?
14
Just how big can I make this dragon?
1
Can a star orbit around a planet?
9
Predicting lunar eclipses with multiple moons
8
What will we see if we start to decrease in size infinitely?

13
Building a tank to fight a mech
76
How can I move a planet?
2
Re-entry scenario
9
How to Effectively Collect and Recycle Space Junk?
14
Are trojan planets possible? Are habitable trojan planets possible?
6
How To Make an Earth with 27 Suns Work, Attempt Two: Orbital Stability
3
Climate model for an S-type binary
5
Designing A Ring World For A Science-Fantasy Setting