Recently, I've been struggling to create an avian race that evolved hands to replace its wings. The consensus on that question was that it was not evolutionarily realistic for the bones of a wing to rearrange into the bones of a hand. But then another idea hit me: if the bones of the wing are too specialized for flight to become a hand, what about the feathers? 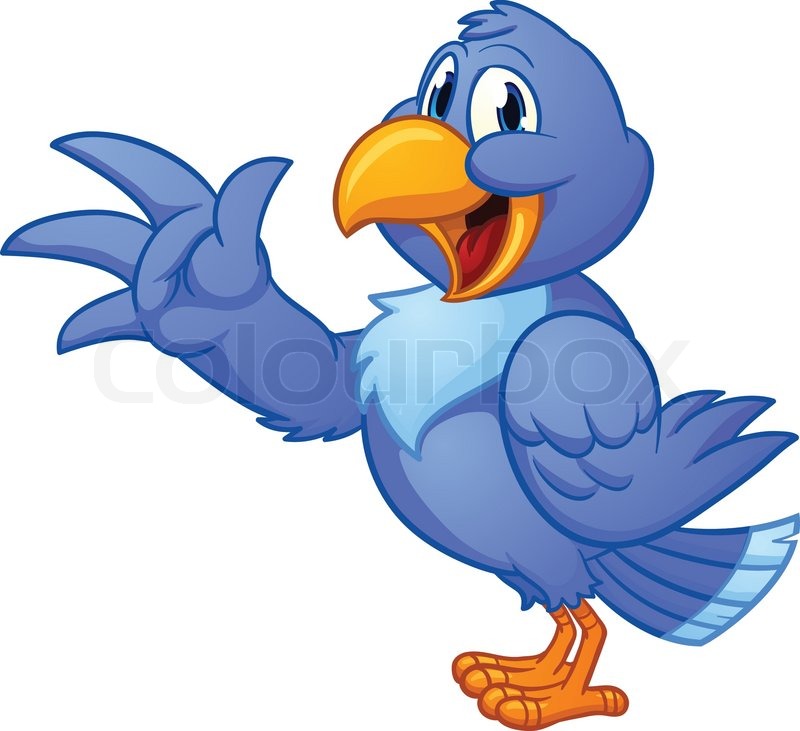 It's a classic cartoon cliche, but is it evolutionarily possible for a bird that has lost the need for flight to have its wing feathers develop into crude claws? Feathers are made from keratin, the same material as claws and nails. It seems all it would take to make a crude claw is thickening the rachis (shaft), reducing the barbs, and adding a few points of muscle attachment to the quill. 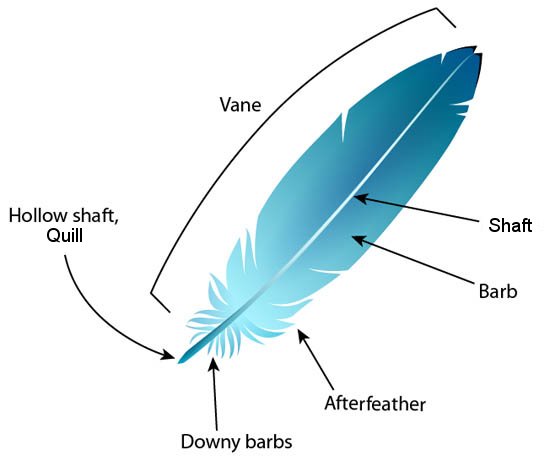 They don't have to be too fancy; I'm just hoping for the ability to grasp and hold objects and maybe to help them climb in rocky environments, not to operate complex technology or perform surgery (I imagine they'd use their foot-talons for that). Just to make them more culturally relatable, I'd like for them to have semi-functional hands even if their foot-talons are more capable manipulative appendages.

So, feathers as crude fingers: Yae or Nay?

Feathers have no muscles, nerves, or anything that can be used for motor control in them. They have a muscle at the base, but its control is very limited.

Maybe a feather might develop a hard 'hook' or claw at the tip which could be used to stick to things a little, but control would be virtually impossible. Also it would make them bad at flying, so basically pointless.

More importantly, if a bird needed to develop the ability to grip or climb things, there is a far better option - proper claws. Hoatzin chicks have a pair of claws that they can use to climb trees quite well before they develop flight. Many other birds, including ratites, waterfowl, ostriches, owls, flamingos, and cassowaries have small, vestigial claws on their wings. A bird lineage could easily develop raptor-like hands; the reason why they don't is because it would make them worse at flying, so it isn't worthwhile in an evolutionary sense.

In my answer to your other question, I pointed out that they would still be able to glide, even with the psuedo-fingers. Remember now that flight evolved from gliding in the first place, so it is not unreasonable that these avians could evolve to act like a bat or a pterodactyl, still having a small finger and flight. The problem here, as I said before, is not the wing, but the weight. The heaviest flying animal ever was around 150 lbs, this is medium weight for a human, but that animal was built for flight and flight only.

The medium here is to trade size for flighted hands, below is a little evolutionary chart of birdman arms vs bird arms that might help you with this problem;

Why not? Wing bones evolved from the same basic vertebrate structure as humans, http://www.livescience.com/23922-velociraptor-facts.html, there is no reason why these couldn't evolve into hands. The end result would not be capable of flying, but they would have functional hands.
Bear in mind good engineering practice is to have one part do one thing. Elegant practice is to have one part multitask. Elegant systems don't work out very well in practice. Your birds can have arms with a large range of movement and sufficiently strong bone structure to support them, or stubs of limited freedom to hang wings on. Not both. And definitely no feathers-turned-talons without the wing structure to support them.
PS: I looked at the answers from Evolving an intelligent avian race with a human-like appearance, and the consensus is the same: flight or fingers.

Birds moult their feathers on a regular basis. Here's a nice article from Cornell Lab of Ornithology about it. It would be like us severing one or more or our fingers at a time and then having to regrow them.

Soooo... don't use feathers as fingers, use the rachis stump of each feathers as a squid sucker. Scroll down on this page to see pictures of the circular-with-spiky-rim suckers of some squid. Your feather has muscles attached to it which evolve into the sucker control muscles. The rachis is already hollow, and keratin is as stiff and as flexible a structure as chitin, so can perform the same functions.

Looking at how birds evolved, it is quite clear they gradually modified their arms and hands to become the structures which are now wings in modern birds. Since evolution is about repurposing existing structures to adapt to changing conditions or enter new niches, it is possible in theory to devolve a wing in order to recreate a hand. This can be clearly seen in this skeletal reconstruction of Archaeopteryx 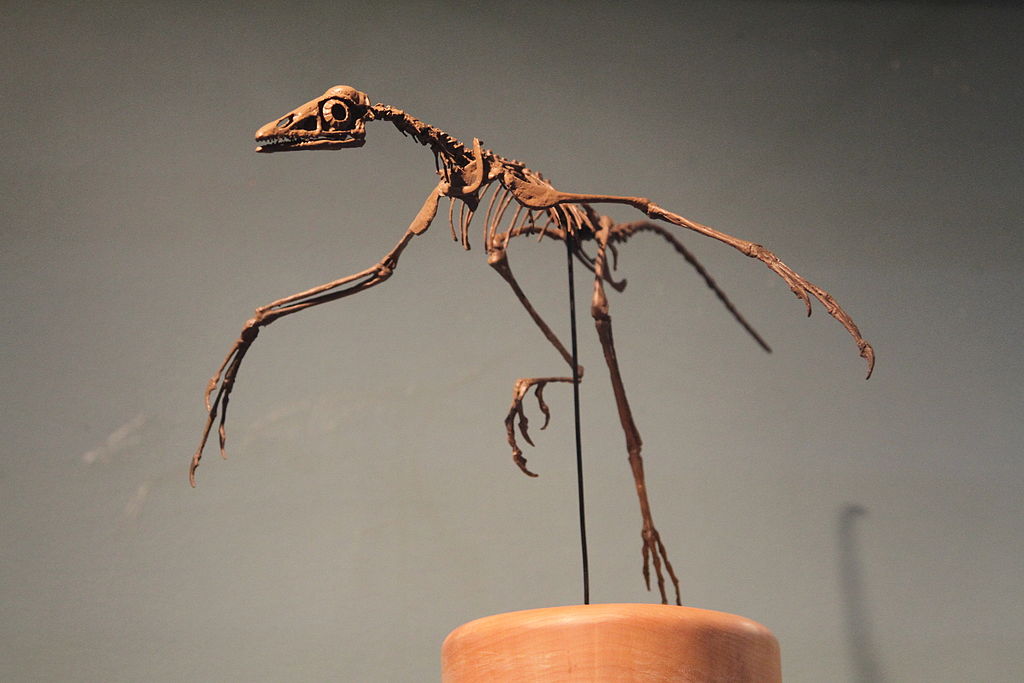 As you can see, the fingers and forearms are very elongated in order to support the flight surfaces, while the upper arm bones are becoming shorter to allow for muscular attachment and the movements needed for flight. the fingers are still fingers, and on reconstructions of the actual creature, the ends of the fingers still extend from the wing surfaces to a allow Archaeopteryx to grasp prey and climb trees. Look carefully at the illustration and you can see the tips of the claws on the wings. 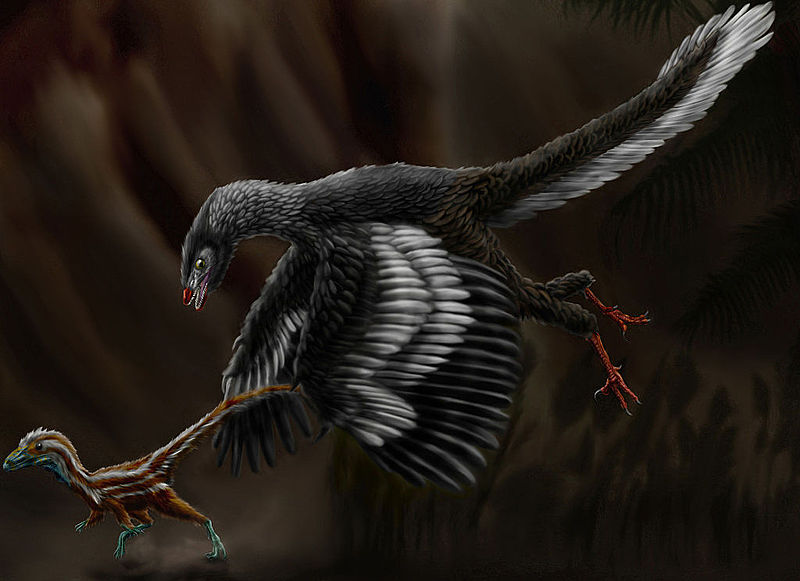 The real question for you as the author is what sorts of conditions exist to cause an avian creature to devolve wings and re evolve the features of forelimbs? Flight is a very useful adaptation, and on Earth it has been done at least four times (insects, pterosaurs, birds and bats). In almost all cases, the adaptations needed for flight require very specialized bodies. In Earth's evolutionary history, any avian that goes back to ground is filling an open niche with limited competition, but none have ever re evolved forelimbs (the Terror Birds essentially lost their wings, while Penguins have turned their wings into flippers). 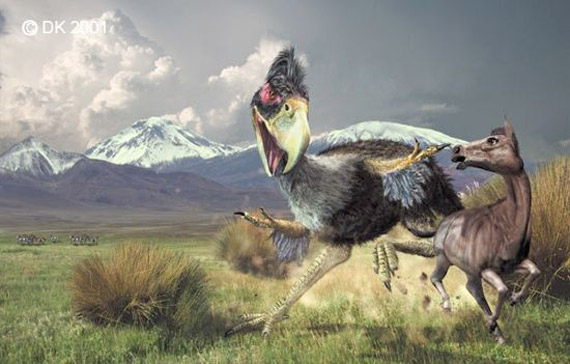 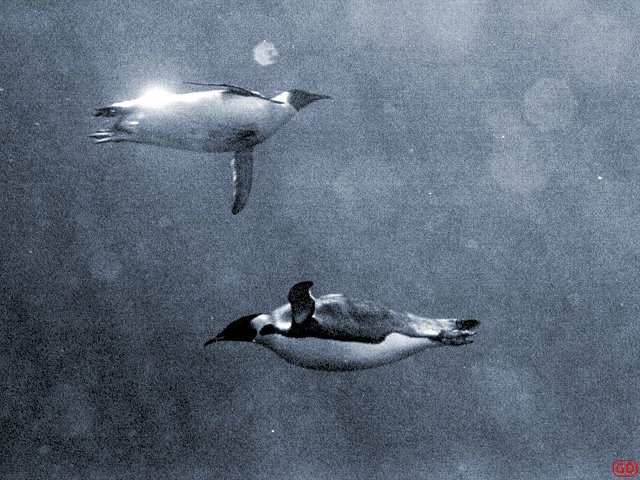 Wouldn't it be more likely for the bird to evolve "backwards" toward something that looked a bit more like the archaeopteryx? In that case, the third "finger bone" in the dinosaur's hand formed the leading edge of a bird-like wing, while the first and second fingers remained fingers and extended out at the final bend of the wing. Presumably, the archaeopteryx could use the wing fingers to climb, hang from trees like a bat or even hold food, and still had feathery wings to use for flying.

I could see a bird that didn't need to fly as much going that way instead of using the feathers, necessarily.

3
Evolving an intelligent avian race with a human-like appearance
5
Avian-human: Arms or Wings
0
How would a species similar to the Rito from BOTW evolve?

3
The Two Types of Angels
3
Evolving an intelligent avian race with a human-like appearance
10
Are talons and beak good enough for advanced manipulation?
18
Metal-Feathered Macaw Viability Part 1: How Can It Fly?
10
Keratin wings: would they work?
5
The most suitable martial art for birdpeople?
4
Best place for wings on a dragon-eagle
8
How would the anatomy of a bird that flies with its legs work?
9
How do the eggs of birds that fly using their legs not crack?
5
Is my character's wingspan designed well?