Is my space station feasible?

I'm trying to plan a rotating wheel space station for a project. It should be noted that I have to stay as close to real physics as possible, although it takes place in far future. The space station is orbiting an Earth-like planet.

The deck 0 is one with reactor core. Besides it's practically a one long tunnel to transport stuff from the manufacturing center to various sectors or to the docking bay.

The manufacturing center can be used to produce almost anything from food to spaceships (can't be bigger than maintenance tunnels). There is a constant supply with resources by a fleet of autonomous spacecraft, which mine asteroids and planets.

(additional notice): Power is not a problem here. Let's just assume there is a sufficient enough power source, which would be more than enough for most problems. Be it a nuclear reactor or thermonuclear one, doesn't matter.

And for everything else it's easier to show sketches. As I'm really bad at physics, I'm not sure if the station has some problems. Does it look feasible? Are there obvious and not-so-obvious problems? If so, what could be improved? 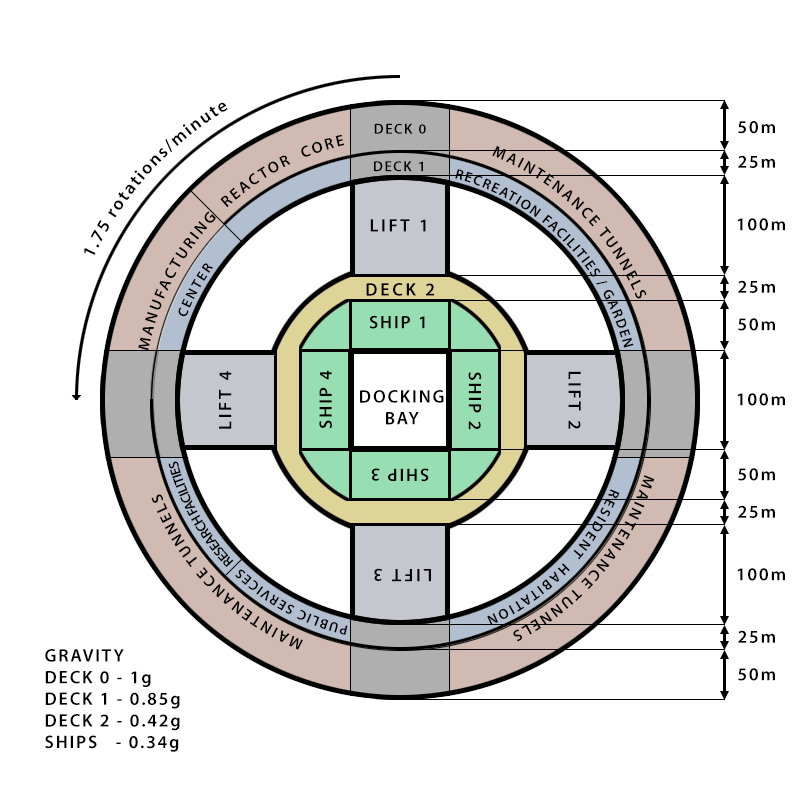 Welcome, Elza...! Your physics background is fine, you expressed the first key ingredient in true intelligence, you asked a question.
Your basic space station concept is sound, and has been the subject or central to fictional venues as diverse as '2001: A Space Odyssey' to ( think more what you're looking for) 'Star Trek Deep Space Nine'.
The concerns most likely to affect your product are around construction techniques and materials, Secondary only to the concerns of what will likely be a self-supporting environment. Use the wrong metal, or design ( think of a shipyard), and your structure doesn't hold up. Use the wrong or insufficient air/water/environmental controls, and it becomes unlivable. Good luck with you construction, your ideas, and with this place. SE is one of the most entertaining and educational places I have ever known..

Is the core nontrotating? It doesn't appear to be, so docking will be tricky!

Big issue is shielding. How does it handle normal radiation and solar events?

With all this coming and going—you focused on distrubtion of goods—you’ll have to keep it ballanced.

You ought to be able to find detailed design discussions on line, and popular essays written over the past 50 years. You don’t have to invent from scratch! Wikipedia is a good place to start to find primary material referenced.

One thing I saw that concerned me that no one else has brought up yet is the location of the manufacturing area. Manufacturing in zero-G would probably be more efficient, so I would guess that it would be moved towards the center, with people on the outside.

Same with the power core. It is being subjected to stresses which it doesn't need to be subjected to. Gravity is useful to people because we evolved with it, but it's a pain for a lot of machinery.

As Nathaniel pointed out, you need to have weight distributed evenly. On larger scale, you can have manufacturing on 2 opposing segments and one backup core opposite the live one (or something else of similar weight, perhaps another (smaller/larger) manufacturing segment). You would probably also need some movable weights along entire structure to balance moving of heavy stuff through maintenance tunnels and to counter changes in layout and contents of rest of station. I hear water is pretty good radiation shield, and it can be pumped easily from one place to another, so parhaps you can use that as your weights. Have some layer of water at the outer edges of station (to keep some minimum shielding) and another layer of water that will be moved around as needed

I'd get sick of watching the damn stars rotate and wobble all the time. It may seem silly but please put windows on the edge/floor so I can watch stars streak by in nice straight lines so I can imagine I'm going somewhere, even if I'm seeing the same stars every 34 seconds.

I'd hate to have to hang out in a maintenance tunnel to do this. Sure I can't sleep in 1g and work in .85g?

Windows are incredibly expensive to provide. Yet despite having camera and monitor technology for years we humans continue to install them on capsules, shuttles, and space stations. Before deciding they aren't needed because of technology x, be sure you understand why we keep installing them in the first place.

However, the main problem that is seen with rotation space stations is scale. I don't know the size or biology of the inhabitants of this station, but if they were human, they might have the following problem:

At a distance of 293m away from the center, the centripetal acceleration is only 1.00341g, which is 0.02398g less than at 300m. In fact, the entire structure has an acceleration gradient over it.

If a human was standing in Deck 0, he might exhibit some rather serious health problems after a few minutes of standing. Because there is less force acting on his head than his feet, his heart will have to work harder to pump blood to his brain. I don't exactly know what the lethal gravitation gradient is, but I think it is a long-term effect of living in an artificial gravity scenario rather than an immediately deadly problem. It would also have relatively no effect if the inhabitant was prone (sleeping).

Not the answer you're looking for? Browse other questions tagged reality-check space physics space-constructs or ask your own question.

14
Space station mass per person
2
Would Building a Waypoint/Colony station in Slip Space be Logical?
3
What mass for my space station to have enough gravity to attract satellites?
8
Can a space station settlement orbit the sun?
9
Minimum radius for a rotating wheel space station to feel flat
10
Space station debris
16
What's wrong with moving cables for a Space Elevator?
0
Can someone with a better understanding of physics review or correct my design of a hypothetical fusion reactor for space vessels?
7
Space station scenario feasibility