What would an external observer see when passed by an Alcubierre drive ship?

My answer to the question Is there a scientifically sound faster-than-light travel system for a spaceship? involved an Alcubierre-drive starship.

However, that then got me thinking. What would an external observer see when passed by such a ship? When not operating, an observer would see just a stationary ship, but what about when it was operating and travelling faster than light? Would there be any redshift or blueshift? Would there be any distortion of the image, and if so, how? Would the drive field be visible? Would it look like it was going forward, or since it is moving faster than light relative to the observer, would it look like it was going backwards? Can you describe what you'd see from the moment it became visible to the moment it vanished into the distance, and how that would relate to its actual direction of travel?

Ignore the fact that a human observer probably wouldn't have time to see anything as it would pass too quickly to see, assume a theoretically perfect observer.

This is a fairly standard Special Relativity problem.

Not to grok all the maths here, what you need to account for is the individual photons coming from different points of the ship, travelling exactly at the speed of light towards the observer. Extra care for the moment the photon jumps the Alcubierre drive bubble frontier.

Since wavelenght (or frequency) is affected by relative speed of the emitter and the observer, we should start thinking that a standard Doppler Effect belongs here, with reddish light for a receding spaceship and blueish for an approximating one, but that is not true. A ship in an Alcubierre drive bubble is not moving, the bubble itself is, so there is no wavelenght change.

What is interesting is how the photons traverse the bubble. I think on that as a very extreme refraction, not caused by any material but by the metric of space-time being compressed or expanded.

Two effects there: one is that of photons coming from different distances (the standard effect that causes you to see both a complete side of a cube perpendicilar to you and its front at the same side) and another caused by refraction, in which light is simply changed of direction.

A resume could be that you see a very very distorted image, in true color.

A streak of light heading away from you in two directions.

There'd be no doppler shift, but, with more modern interpretations that'd take less than a universe-full of energy to achieve, the bubble is bigger on the inside than it is on the outside. Everything inside would look really small from an external observer.

You'd see the light receding from it after it passed by, of course, but it'd also appear to move back along the way it came because it was outracing its own light on the way to you.

An Alcubierre drive essentially creates a black hole ahead of the ship, a white hole behind it, and a timespace neutral area in a ring around it. So depending on the angle light hits it will make different things happen.

The area behind the ship will exert an outward curve on all light that approaches it but does not necessarily contain energy to emit; so, it may not be all that bright. At low speeds a white hole would look like a white translucent plastic blob, but as the field intensifies, it will act more opaque and create a less scattered reflection making it more mirror like. In the case of FTL, moving faster than light means that no light can catch up from behind to reflect off of it and light it overtakes will not be able to be pushed away faster than it's being hit. This means light will radiate out like a cone from the rear field following a similar pattern to a sonic boom.

Light can move through the ring of normal space around your ship but it will all get swept up in your white-hole field meaning you will not be able to see the shape of your ship at all.

The black hole in front of your ship will absorb all light; so, nothing to see there.

All these factors combined mean that you will only appear as the flat disc of light emanating from your rear negative gravity field.

However, light emitted when you are closer to the target as you approached it will show up first followed by what was emitted earlier. This means you will see the "luminescent-boom" in reverse. You may also see the ring of light appear to be emploding faster than light if you are traveling between 1c and 2c. This is just an optical illusion caused by the light all catching up to you at about the same time. The faster you move, the slower the ring will appear to implode and the dimmer the light will be.

Last question is color. Despite many answers saying there will be no redshift, this is simply is not true. Red shift is caused because waves of light emanate in areas of space that are changing over time relative to your position. How that change happens is irrelevant since all light leaving your warp bubble will be moving at 1c. As a ship accelerates towards you approaching the speed of light, you will see it blue shift. As it hits 1c all light waves will be momentarily compacted into a super dense gamma ray burst, but what is cool is that once the warp ship exceeds 1c, it will actually red-shift even while moving towards the observer because the waves will be inverted and you and will only see a blue shift at certain angles where the relative angle of the ship to the observer creates a relative approach velocity between 0c and 1c 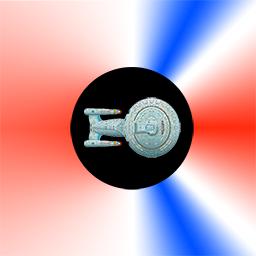 One last detail to be aware of is that by the time you begin to see this light implosion the ship has already either reached you or passed you; so, there is one additional phenomenon that is worth note: What does an FTL ship look like coming out of warp right next to you?

Remember the black hole in front of your ship? All of the light and matter it sucked up while in transit will be released when you come out of warp. Let's assume it takes time to slow down a warp ship as you lower your warp field. This means that moments before the ship arrives you will see a very blue shifted orb of light appear out of nowhere as the black hole stops being strong enough to hold all of its light. It will appear to be moving faster than the speed of light, but that is an illusion, once you see this, it means the ship is moving at less than 1c. You will also see a light ring start to expand out from it. This is the light ring I discussed as it appears at less than 1c. As the ship slows down the blue shift will begin to fall off, and the light ring will begin to reverse direction and redshift as the inverted wave phenomenon begins to catch up to you as previously discussed. When the ship arrives, you will continue to see the still the imploading light ring fading off into the distance behind it.

If the travel path is curve, ship images can appear one after another (it can look like there are more of them, minimum two in case of line, not curve path), based on the distance of the "curve peak" to the observer.

But this would still happeng at the light speed, so i assume it would be only some blink, if any. And after that the sound should come (if not in space).

From this blink can spread the engine emissions. But initialy they will have the speed of ship and slow down after a while.

If you can see clear through the event horizon of the drive bubble then it's a basic relativistics question; answer the ship appears at the point of closest approach and then recedes from there in both directions at a great rate of knots, that's for a straight line transit which is most likely given the issues of turning at those speeds.

Now it may be that the event horizon is opaque or highly distorting in some way, in that case you still see an object appear at point of closest approach and disappear in two directions but now that object isn't a ship it's the bubble around it which may or may not be visible even at pointblank range and may have any appearance imaginable if it is visible.

I am not certain why, but I believe that any FTL technology , regardless of methods, would appear as small burst of gamma radiation , when 'moving' past outside observer. The reason is that space is not a perfect vacuum. There is highlighted diffuse gases, and dust. Alq Drive creates it's own tiny universe. As space is being warped/compressed, u compressed, the matter caught on the boundary Is effectively being accelerated to FTL velocities, as it is brushed with boundary layer of Alq. Drive. As nothing can go faster then light within a same frame of reference, gas and dust become gamma radiation. With Alq. Drive we need to be comfortable with concept of realized velocity. Written as V^r . Where 'r' is a multiple of speed of light , 'v'. V^1 is speed of light in a vacuum. V^2 is twice speed of light, and so on. Where r is smaller then 1 , then V^r is effectively sub light.

First the speed at which the Alcubierre bubble is travelling is such that it would be not be in visual range for long enough to see it. It takes about a 10th of a second to see an object. Even if you could see the object from 1000 miles away as it flew by at 182k(assuming just at the speed of light and not faster) miles per second it is only going to be in your range for less than 1 hundredth of a second. No where near long enough for your brain to recognize that the object was even there.

Second an Alcubierre drive works by taking the ship out of normal space time which means that as far as the rest of the universe is concerned the ship no longer exists in the normal reality. So there is nothing to see even if you did have the ability to detect and something moving at that speed.

Not the answer you're looking for? Browse other questions tagged science-based physics space-travel faster-than-light or ask your own question.

41
Is there a scientifically sound faster-than-light travel system for a spaceship?
2
Dropping out of warp