In an episode of CSI Miami a sniper uses ammunition with a thin plastic coating between the bullet and the shell casing. supposedly when fired the plastic coating is shredded or destroyed, but the bullet has no striation marks that could be matched to the rifle that shot it (I'm not holding my breath because, well- CSI Miami).

Could this work? Are there any obvious flaws in the idea? Is this even actually done IRL?

This would only work is if the bullet was saboted, which means that the bullet would be encased in a thick layer of plastic or light metal peeling away once the bullet exits the barrel.

While this may be what the shows writers may have been thinking of, the description that you provided suggests the shows producers really didn't understand the subject at all. 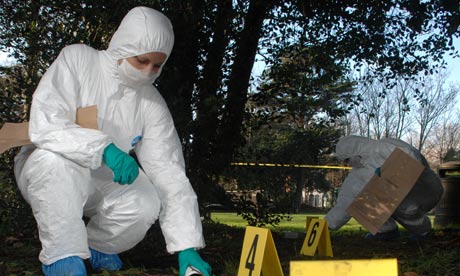 Since the gas sealing and induced spinning of a rifled round requires the round to engage the rifling, a thin layer of plastic will not serve (it will probably peel off inside the barrel and the normal copper jacket will engage the rifling). The other thing which the show seems to have glossed over is the criminologists (the guys in the full white protective suit who isn't in the show) would be scouring the area and probably discover the pieces of saboting. From there is a short matter to examine the pieces and find the rifling marks.

TL:DR Don't use CSI as a way to find ways to beat the cops.

The plastic coating seems like a dumb idea, but the sniper is not required to use a rifle. There are guns that that have smoothbore barrels and aerodynamically stabilized ammunition. Here is an example. I doubt it makes sense for smaller calibres, but you specifically wanted a sniper weapon.

That said not having rifling on what remains of the bullet is of limited value when you are the only person on the continent who had the necessary weapon unaccounted for. It is generally better to just use a common and unregistered weapon and dispose of it afterwards. You can use special ammunition that explodes or fragments on impact, but if you are too attached to your gun to dispose of it, you shouldn't use it to commit murders.

They make polymer coated bullets. The webpage shows a picture of fired rounds which clearly shows rifling marks. In this case, the polymer coating serves to keep everything together in order to reduce lead dust and shrapnel hazards at indoor firing ranges. 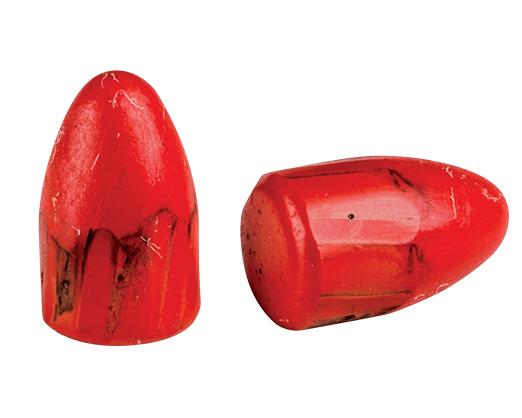 A tough polymer would survive, as pictured in another answer. A sufficiently fragile or soft polymer would be likely to break up and/or melt before it left the barrel (and possibly foul the barrel on the way), whether used as a sabot or a jacket. There isn't much time for this to happen, but perhaps burning off a sufficient layer would be possible, either ignited by the propellant or pyrophoric (and sealed into an airtight cartridge under vacuum). You'd effectively be producing a tracer or even incendiary round, which may not be what you're looking for if you're trying to be stealthy.

To get round the unusual bullet being detectable, a common bullet of a smaller calibre could be carried in the disintegrating sabot, so the murder bullet looks unfired apart from the unusual ash on the surface and signs of high heat.

There is one possible way this could actually be done as described.

In the late 19th century (before metal jacketing was developed), it was relatively common for higher velocity bullets to be "paper patched" -- that is, the bullet was wrapped in one or two layers of ordinary paper, which would shred into confetti just past the muzzle after being cut by the rifling. This would still leave indistinct marks on the bullet, but more with the texture of the paper than anything that could identify the rifle that fired the round.

This is still done, both with black powder and smokeless powder; it allows firing a relatively soft lead bullet at modern rifle velocity, which would lead the barrel badly if done without any kind of jacket. This is preferred, in some applications, because the soft lead is more effective on an animal target than a jacketed bullet.

A modern version of paper patching could use a high toughness plastic similar to Tyvek. Once again, the bullet would show marks, but only from the wrapping, not anything that could distinctly identify the rifle -- and the wrapper, while unlikely to completely shred, would blow away on the slightest hint of a breeze. Firing never seriously burned the paper in paper patch rounds (heat couldn't transfer in the milliseconds of barrel time), so any plastic that won't char at lower temperatures than paper ought to work.

9
Potential of Potassium/Caesium Bullets?
47
Effects of bullets firing while in a handgun's magazine
13
Is a sword that deflects bullets feasible?
0
Remote Control Bullets
8
Is making bullets from scratch possible?
1
Plasma Blades vs. Bullets
4
Usability of frictionless bullets
7
Is my plasma weapon design any good?