Sleipnir is Odin's steed - an eight-legged horse in Norse mythology. How and where to place its legs to make it faster than four-legged horses? What other benefits or drawbacks may arise from the additional legs?

Usually one would take its existence for granted - the gods made it that way. However for the sake of the question: what selection pressure would make evolution invent a horse like that and what conditions would support this feature?

Clarifications: Assume earth-like conditions (gravity, air pressure and composition, etc). Main focus should not be on Odin handwaving the beast into existence but the characteristics of such an animal and its development assuming evolution (besides benefits and drawbacks of such a design which could be discussed no matter how the creature evolved). 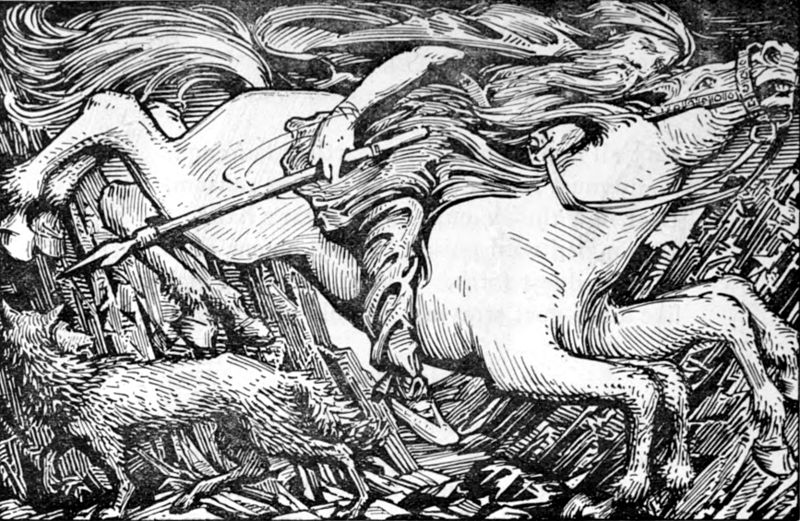 Odin rides to Hel, Source, released into the public domain

Something that evolution very seldom does is create extra limbs. One of the best reasons for this is that there's no viable intermediate forms; you have to grow the new limbs to the same length as the old ones before they can be useful, and that would take millions of years of having useless stubs.

So I propose that your eight-legged creatures actually have four split legs. To start off with, you can use an animal with a cloven hoof, like a cow or goat. These animals are already used as pack animals, so with a little bit of selective breeding they should be able to somewhat reliably carry humans.

From there, it's just a matter of cutting the rest of the leg in half. To do this with evolution, I'm imagining an environment with very uneven footing. A lot of holes where one toe could fall in, and then you break your ankle and have to be put down. The animals that can traverse this without breaking their ankles might be the ones with longer toes, or less connections leading up to the ankle, leading again to longer toes.

After that, luckily there are already two bones in the foreleg, so you just have to decouple them. This is going to be a big change that will probably take a lot of generations, and I doubt that there'd actually be enough of a benefit for it, but I still think it's more likely than spontaneously growing four extra legs (and who knows, sometimes evolution does stupid things).

At this point, around 2/3rds of the leg is split up, and I think that's good enough. It's still going to look really strange, and look a lot more eight-legged than any other comparable creature.

EDIT: hand-drawn illustration because people seem to like those: 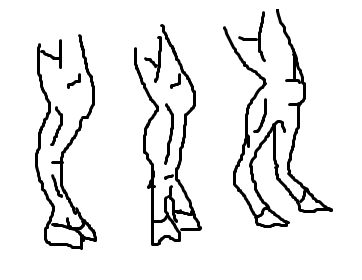 8 legs compared to 4 won't actually improve top speed very much...if anything the bulk of the extra appendages gets in the way. That said, there is a heavy advantage in the extra limbs: A 4 legged horse runs forward exceedingly well, however side to side movement or even stopping isn't the easiest, while an 8 legged creature could theoretically have the extra 4 legs designed to give it side to side movement, able to redirect the momentum of a straight forward run either left or right rapidly.

1 - harsh terrain. 8 legs would be an easier balancing act than 4 legs...really rough terrain (volcanic for example) where straight forward movement is hindered due to unstable ground would mean the ability to step side to side quickly would allow for quicker movement through harsh terrain (look up devils golf course death valley for an example of this terrain).

2 - High speed predators. If a high speed predator existed that could rundown a horse a full gallop, then the horses would need to adapt to other mechanisms to survive. Quick agile side to side movement becomes this mechanism (IE, the 8 legged horse can jump to either side and change it's trajectory faster than the predator it's evading)...or the ability to enter and move quickly through a terrain as listed above.

The side to side movement could be a tremendous advantage if the regular 4 legged counter part was slower than the top predator in the area.

The same tactic is employed when we see Orca and Sea-lion encounters. The Orca is far faster in a 2 dimensional plane, while the Sea-lion is significantly more agile. The Orca gets a first strike...a surprise where it swims at full speed at its intended target. If the Sea-lion (with a bit of luck) sees it, it can get out of the way at the last second. What then occurs is a tight circle, with the Orca being outmaneuvered as it simply cannot replicate the tight turn. Of course this will often end up as an eaten Sea-lion anyway, but this is also the only route this Sea-lion has for survival. Similar setup here, with our 8 legged equine capable of making tight turns at higher speeds to outmaneuver a quick yet less agile predator.

The Sleipnir is a Creepy Crawly

The worlds fastest spider, The giant house spider, can run at speeds of almost 2 feet a second. Scaling this up we can assume that a spider the size of a horse would be able to run 177 miles an hour!

Another interesting spider species, Salticidae, imitates ants, as seen above. If on the strange world of Asgard, the gravity is lower, we can say that giant horse mimicking spiders evolved to hunt down equidae animals.

The specific limbs of the Sleipnir would look very close to the horse but would split in two, with the hooves acting as claws. Their mandibles would likely evolve to either go flush with or inside their face.

Equus sleipniricus evolved from our world's horses, perhapes with the help of radiation and teratogenics along the way. In all aspects they are just like ours, but they have the ability to regenerate lost limbs, just like newts do.

Which is why eight legs are beneficial to them: four of those legs are spare ones. Should a predator such as a bobcat or panther bite them in the leg, or should a leg break for any reason, they are capable of undergoing autotomy, that is, they let go of that leg. Having spares mean that they can keep running for their lives.

Notice that the spare legs don't just sit still, waiting for the original ones to break. Equus sleipniricus is able to use them to run as well at any time, thus being faster than a real Earth horse.

I'm not a biology major, a vet or anything that has anything to do with anatomy. I did do some googling in consideration of this question.

First - your evolution question. If you check the mythos, Sleipnir is actually one of a kind and is a child born of a horse and Loki (Loki was the mother). Greek mythology also had its share of weird things born when gods mated with animals. My 'evolution' story for them would probably be based on Sleipnir being the forefather and the existing ones descending from him. Or maybe there were a few progenitors if Loki really liked that horse.

If you don't like that, I see the next most probable answer as your world having mammalian species with more than 4 limbs scattered across the world, either with 8 being the standard or maybe with 4, 6 or 8 depending on the ancestor. I'm no evolution scholar but I would assume land creatures generally have 4 limbs +/- a tail due to that being what we first obtained when crawling out of the sea. If your world had a few different things crawl out, you could wind up with different limb counts.

At this point, I think adding a limb to something would require extremely selective breeding over a course of hundreds, if not thousands, of generations. Adding 4 limbs...well, we'll be able to do that with gene splicing (or be extinct) faster than nature would be able to add them.

Second - How do the limbs work? I'm going to skip spider-shaped bodies, the implications of trying to set 8 legs in a circular fashion on an entity with a spine are not something I want to get into right now. If you desire a spider-horse solution, let me know and I'll ponder it. My knee-jerk answer is multiple spines.

I'd go for setting it up so that the front shoulder joints are replaced with small versions of hips - rather than a single joint, you have two side by side. The hip bones in the back would have evolved to have a similar arrangement with 4 joints coming off of them in 2 pairs. The stomach would have some sort of pouch and one set of 4 legs would generally be left in the pouch. This gives the animal the opportunity to allow the leg muscles in half the legs to be at rest at any given time, increasing stamina. The lungs and heart would expand for this, or maybe the horse actually has two sets of each to account for the extra oxygen and blood flow required to service an extra set of muscles. Spare organs is also generally an awesome feature for mythical animals.

The addition of 4 legs should add a decent amount of height + distance to the jumps, ask a physics major for specifics I'm going to go ahead and guess you'll get something like 50-80% extra.

With extra organs and legs, you're looking at a king of horses that isn't necessarily faster than another horse but will far outlast any other.

For anatomy, you can look at the Direhorse from the Avatar movie for at least the first 4 limbs. I'm sure some animator or artist has done an anatomical series on how the bones and muscles would work to allow parallel limbs to work as most aspects of that film got a pretty through scientific treatment. You can duplicate this for a rear set of legs.

As for how such a horse came to be, consider a bizarre, yet stable, conjoined twin that the gods somehow can replicate. Perhaps as a foal(s) the unwanted parts are excised (like a duplicate head), internal systems are hooked up as necessary, and somehow the beast can control all 8 limbs. Obviously this isn't something that would be likely to develop into a naturally occurring species, but then again, this is a steed for the gods, so maybe they can irradiate and inject teratogens into a normal pregnant mare in order to create a new Sleipnir when Odin loses his old one.

It is also quite possible that "8 legged steed" was just Norse slang for "a really fast horse that moves so fast it looks like it has 8 legs!", not something meant to be taken literally :)

Have you ever seen "Tölt" the 5th gear of the Icelandic Horse?

They have another style of walking which does not compare to neither the canter nor the trot which are 3/4 or 2/4 rhythms. If Sleipnir was to do Tölt, it might actually give a speed benefit if the legs were approximately located as in the picture you provided, however they'd need to feature a full set of joints.

Tölting horses can get very fast, comparable to the average gallopping horse

Not the answer you're looking for? Browse other questions tagged science-based reality-check evolution mythical-creatures mythology or ask your own question.

8
Why would an animal need six legs?