Near-modern (pre-digital) society without photography, TV or other image-capture technology

Would it be possible for a pre-digital society to have evolved naturally to the same level as post-industrial-revolution Europe, without the technology of photography and, by extension, moving pictures?

Whether this is due to the lack of resources (silver nitrate, iodine, mercury, etc) which enabled early research, or some other, less obvious reason isn't that important, as long as this reason is expanded into the effects on other major technologies - if mercury wasn't available, for example, mercury-based liquid mirror telescopes couldn't exist.

I would still like the society to have at least a similar technological level to, say, Western society in the mid 1900's or so, including telescopes and such, and even live broadcast TV, just not the means to produce a permanent image on an object for storage and distribution (representations via paintings, etc are obviously allowed). This needs to include moving film, camera obscuras and other related image-based technologies.

I think by the nature of the question, this society would not be possible on Earth as-is, but could it exist on another planet, or an alternative-history of Earth, if that's what is needed?

What major differences would such a society have?

I have limited this to the pre-digital era only, as I would like to explore the effects that a digital revolution (which includes the ability to produce digital images) would have on a society that didn't have a non-digital precursor of any form.

If this question is too broad or opinion-based, or needs clarification, please advise (it's my first question). Any help on tags would be appreciated too.

Microfiche and related technologies were used in document archival and distribution.

Early fax machines were very expensive, but crucial in a number of fields. This technology was also used in the development of the first television systems.

Many industrial processes use photography as part of quality control, etc.

Espionage was often based on photography.

Xerography is essentially photography with some implementation differences.

Hollywood was a significant part of the economy. Consumer photography was also a large business. Training films were also in widespread use.

None of the above are necessarily show stoppers, but it is hard to be sure television would have been successful without a foundation in photography. On the whole, lack of photography would have been a significant economic loss -- although since you never had photography, you would not notice the loss directly.

Of course, Modern electronics are very dependent upon photo-lithography, though this use did not take off until the 1960's -- this has been one of the major drivers of the economy ever since, so it would be a huge economic loss in today's economy.

I will take the negative side of the question.

The Dutch master Johannes Vermeer is thought to have used an camera obscura in order to have done many of his masterpieces. The clues are in the paintings themselves; tricks of perspective and colour which are difficult for a painter to carry out without the assistance of a camera. Since Vermeer worked in the late 1600's, the optical technology was listed to using mirrors and a hole in the wall of a darkened room or a tent 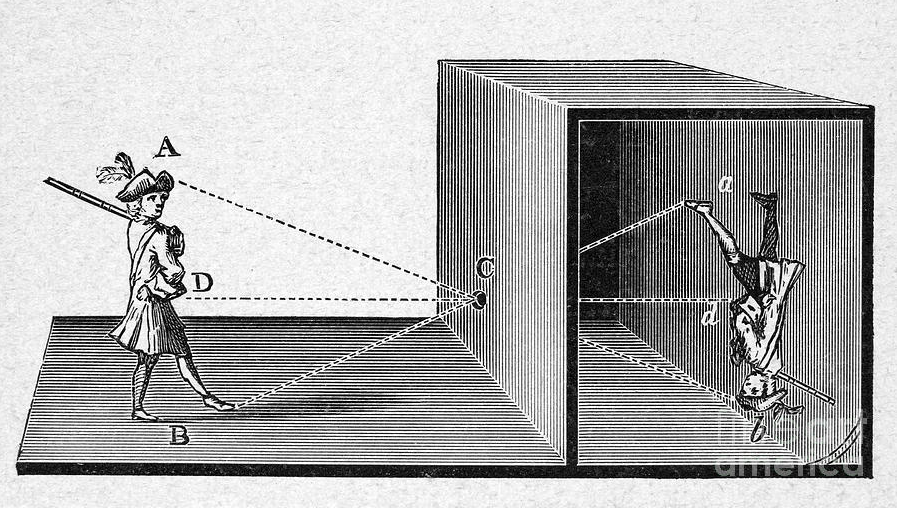 Moving pictures are a bit more difficult, although a flipbook like most of us did in school with our notebooks is one possibility.

This brings us to the incredible mechanical television, invented in 1924. The basic idea was to use a "scanning disc" with a spiral pattern of holes cut into it to "take" the picture, and a similar device to "project" the image. The amount of space isn't sufficient to fully describe how it was done, but this site is a good place to start. You will note that the inventor patented his system in 1884. If this had been followed up immediately we would be celebrating a century and a half of Dr Who and placing bets on the identity of the actor playing the 50th Doctor.... 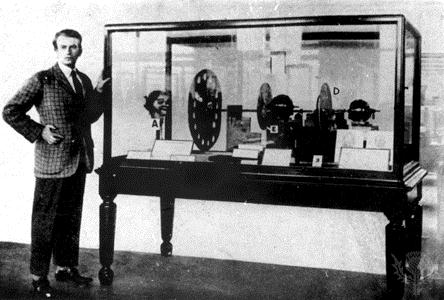 Preparing for the "25 Doctors" episode

So the idea that image capture buy technological means isn't possible simply ignores both the laws of optics (camera obscure's use a very simple property of light) as well as the ingenuity of human beings (while you are at it, you might consider the first FAX machine used a pendulum as part of its operating mechanism). While these devices are not capable of many of the things modern image capture technology is capable of, they still provide a means for doing many of the tasks that most people desire.

I would say, live TV broadcast would cause some engineers/scientists to come up solutions to saving still or moving pictures. Humans are quite innovative, we solve problems that seem impossible to tackle. While it is possible for TV broadcast to be developed before photography, I don't think photography would take long to follow. At least someone would think of saving electromagnetic waves to save TV to a suitable medium. This could be as primitive as vinyl disks, but a scientist or an engineer would pursue this until they manage to get a solution.

So back to your question. I think it would be possible, but for a very short time span.

If it was a society of blind people, this would be rather certain than probable.

Or would a society of blind people be unable "to have evolved naturally to the same level as post-industrial-revolution Europe"?

Not the answer you're looking for? Browse other questions tagged reality-check society technological-development scientific-development .

53
In a society of flying beings, would the wheel ever be invented?
11
How could an underwater civilization develop fire?
13
Could a human civilization never invent the wheel?
5
Why Colonize a Planet Without the Continued Benefit of Modern Technology?
5
Classification of types of Civilization
1
Must Make a Major Modification of Medieval Metallurgy
3
What plausible history allows a society to adopt Dark Age weaponry and reject "modern"-ish weapons?
7
Ways for magic and technology to coexist without affecting each other and the society as a whole?
9
Is a biotechnology-only civilization actually possible?