What is stopping terrorists from creating a super virus to wipe out all of humanity?

What is stopping terrorists from creating a super virus to wipe out all of humanity?

All the while vaccinating themselves to be immune to their bio-engineered virus. Its like an invisible nuke, there is no proof who made it or released it.

Since we can't stop the progression of technology, bio-engineering will only get cheaper, more wide spread and easier to do. For me it seems like, its only a matter of time.

Dr. Michio Kaku had warned us of the dangers of bio-engineered viruses with the advent of new technology.

Stephen Hawking made a statement humanity will most likely destroy it self either through nukes or weaponized viruses.

Please tell me there is a light of hope for humanity & give me some ideas on how humanity can overcome such an obstacle.

The greatest weapons of mass destruction were only made possible through Science & Technology.

It feels like humanity's inevitable fate. The trickle effect of knowledge doesn't have to flow far.

Talmeezur Rahman, a computer major at Collin College in McKinney, disappeared from the U.S. in 2014, and his "fighting name" was listed on ISIS documents"

"Omar Kattan, whose family apparently still lives in Denton, attended UNT from 2007 to 2011 and graduated with a degree in biology" 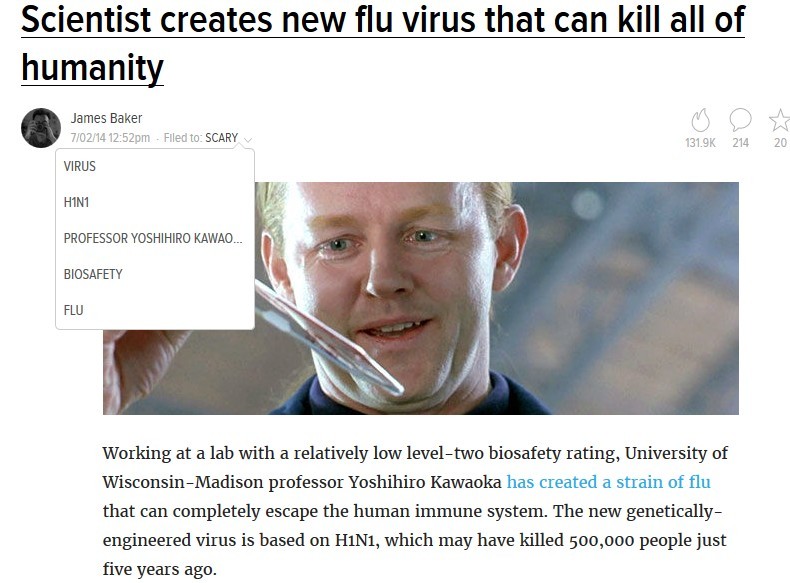 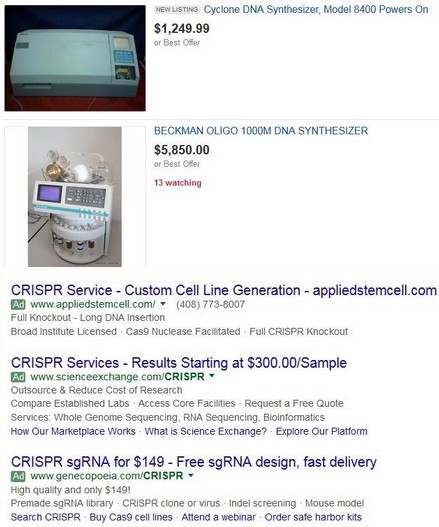 Terrorists are not out to destroy humanity. Terrorism is a way of fighting a war against a stronger power using a combination of stealth and demoralization. They aren't stupid (well, some might be, but those ones are the pawns, not the leaders). They aren't going to do something that has a high chance of killing themselves.

The thing about vaccination is that it requires the immune system to be capable of fighting the virus to some extent. You give the body a weakened form of the virus so that it learns to recognize it and learn its chemical weak points, thereby allowing it to make a "first strike" upon infection by the real thing. If there is a virus that can completely bypass the immune system, it is impossible to effectively vaccinate against.

There are some nasty engineered viruses out there, but there's always a trade-off between their ability to spread and the ability to control them. It's basically impossible to make a virus that will wipe out a significant portion of humanity without killing yourself as well. They are a deterrent, like nukes, not a practical weapon.

The real danger is that one of these deterrent-intended super-viruses escapes by accident... fortunately there are very strict safety codes to prevent this kind of thing from happening. We hope.

The first rule of biological warfare is develop the antidote or vaccine to whatever biological weapon you intend to deploy. That your enemies perish and people on your side can survive.

Your basic biowarfare genius terrorist has to first develop his evil super-bug, then spend decades of research to create the antidote or vaccine. That's the real reason why super-virus weapons are unlikely, even if it's super easy to create new and deadly viruses it takes forever and a day to come up with an anti-super-virus vaccine.

I'm surprised that everyone is thinking about ideological terrorists and disputing why they would or wouldn't introduce a super-virus, when the people with the motivation and the know-how are plainly obvious, so I'll keep my answer short and sweet:

Eco-terrorists who view humanity as a disease would relish the opportunity to erase our species from the earth, themselves included.

This was featured in an episode of The Blacklist.

Terrorists are not out to terrorize or destroy just for kicks and laughs. If terrorists were only out to make life miserable for others, there are myriads of ways they could do that. One of the most efficient ones would be to attack the power grid. So why does that not happen more often?

It is because terrorists have goals they wish to achieve with their terror. Terror is not a goal in itself; it is the means to a goal. And no terrorist has "Hey, let's get rid of everyone except me and my buddies" as their goal.

2025–2035 would in my opinion will see a spike in Bio-terrorism, as technologies advances it would be countered by introducing compulsory nanobots (almost like vaccines today) into blood streams it almost all countries.

The biggest problem is creating a super-virus, even though bio-engineering is possible no one know how DNA works, people/medical community have rough idea as to which genes correlate to which properties, but technology isn't perfected enough to create a virus with multiple desired properties.

An Ideal super bug would have to be

We aren't technological advanced to design a super virus, even most developed medical labs and military research are having hard introducing simple planned genetic changes. Knowledge to design not only a new bug but a vaccine is highly unlikely, and there is a inherent fear the virus might mutate and kill the terrorist themselves.

People can still use DNA synthesizer to create bubonic plague, yellow fever, or even ebola with some effort. But you would specialized equipment, lab, temperature regulated setting, which all are tracked by most government organization. Even if a terrorist organization creates such a virus, most delivery methods aren't good enough,virus wouldn't be fast spreading. By the time a virus has 100 causalities, quarantine would be declared, leading to rapid solution in affected areas.

But I believe this would change around 2025, with increase stress of climate change and start of unemployment due to technological advancements, increase in technology coupled with publicly available data, bio terrorism will be a real threat.

It's the same as to why a zombie virus does not spread everywhere :) You need special circumstances for that, the infected has to spread it to others. While that disease can possible spread in the entire country, quarantine will stop it from spreading further.

Unless you plan accordingly, by spreading the disease in an airport for example, then a very large area can be covered. Also terrorists are brainwashed people. They want to make a impact. Blowing up something is better than coming up with a plan to invent a new super-virus.

However for countries who have been planning this, then they can easily pull this off: bio-warfare.

As noted, terror is a tactic in support of a goal, not a goal in of itself, so "killing everyone" isn't going to be high on the goals of the terror group's leadership. Even the most fanatical Islamic Radicals of today are out to convert as many people as possible, enslave the Dhimmi and destroy anyone who is apostate or could threaten the Ummah. Dead people don't make very good slaves.

Outside of motivation, there is also the issue of how virii behave in the wild. A virus which is too virulent will "burn out" since the population will die before it has time to spread into new hosts. Even genetically engineered virii will mutate and the ones which are less virulent will survive and propagate. Based on historic norms, the upper limit of deaths will be about 1/3 of the population.

When dealing with creating a virus, there is a lot of other things which might deter a terrorist organization. Biosafety is a huge issue, you don't want your science cadre to kill themselves or be killed in what is essentially an industrial accident. If you do have an accident in the lab, you ask wiping out your own organization first. Finally, bioweapons are not controllable in the way conventional ones are, and you will not be able to target a specific population, country or region.

Terrorists are also constrained by the need to be under the radar and quite mobile, buying all the various equipment needed for a level 4 biohazard lab will start raising flags, and it is difficult to see how they could quickly pack up and move all that specialized equipment when the police or army start to close in.

One exception to the rule:

There is a very dangerous movement of radical "Greens" who are convinced that the human race has to be "culled" by 5 billion people or more in order to "heal" Gaia. These fanatics are far more dangerous than any Socialist dictator (Hitler only killed 6 million, Stalin 20 million and Mao is estimated to have killed as many as 65 million; all small fractions of the billions Green fanatics believe necessary to achieve their Utopia), and are probably to going to be unmoved by the danger, unpredictability or uncontrollability of the virus. Indeed, they would probably be content to die in their lab while developing and releasing the weapon.

Creating novel viruses is now within reach of terror groups. As pointed out here:

Eradicating smallpox, one of the deadliest diseases in history, took humanity decades and cost billions of dollars. Bringing the scourge back would probably take a small scientific team with little specialized knowledge half a year and cost about $100,000.

Another factor that hasn't been touched on:

We don't have the biological knowledge to simply write a super-virus. Creating such a super-weapon will require a lot of human testing, first to develop your super-bug and then to create a vaccine for said super-bug. This will be an awfully big project to keep secret, not to mention the number of people you will have to kidnap for your testing.

Furthermore, as others have said, terrorists are normally about imposing their ideas, they don't seek to destroy the world.

Others have said that biology doesn't support such bugs but while a 100% kill is out of the question I think it would be possible to effectively destroy it: Take about the nastiest (lethality + spreadability) bug we know--smallpox. Take your sample population, vaccinate them. Take a supply of smallpox (note: I've run into the complete genome on-line. Modern tech can convert that back to the virus) and mutate it. Infect your test subjects with the mutated virus. Repeat until you get a deadly result--something with similar lethality but for which the vaccine doesn't work.

Now you want to make a killed-virus vaccine. They're not the best and they're not easy to mass produce and they're not 100%, but they're much easier to do than modern stuff. Immunize your group.

Prepare a bunch of dispensers, place them in airports around the world. Simultaneous release. The medical systems will be totally overloaded and effectively useless. Survival will be the same as in the old days--roughly a third will die. I think the grid (trade, not merely electrical power) will collapse--and that will take the kill to upwards of 99% and could reach 100% as you end up with an awful lot of desperate people who will fight for food now rather than produce food for months down the road.

Not the answer you're looking for? Browse other questions tagged technology science criminal-underworld or ask your own question.

4
Could a solar superstorm or distant supernova wipe out all our extraterrestrial technology?
11
What stops a race of giants from wiping out humanity?
1
What can prevent a super elevator to a space station from being invented?